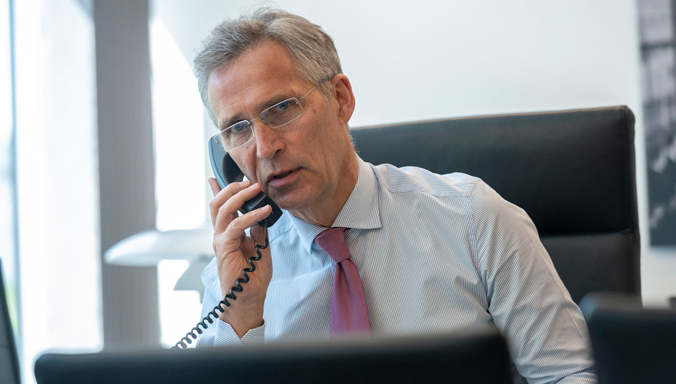 On the 23 and 24th of September, NATO Secretary-General Jens Stoltenberg spoke with Turkish President Recep Tayyip Erdoğan and Greek Prime Minister Kyriakos Mitsotakis their conflict in the Eastern Mediterranean, propelled by the discovery of rich reserves of natural gas under the seabed of the Aegean. The dispute over the exploration of this natural resource rekindled territorial tensions over the two nations‘ maritime boundaries and the division of Cyprus. The strains were escalated by military demonstrations and threats and third-party countries such as Egypt and France.

Stoltenberg supported the recent development that exploratory diplomatic discussions would be conducted between Greece and Turkey. He highlighted the importance of addressing the situation in a framework of Allied collaboration, in line with international law, and following NATO ́s values. However, the military organization’s values and soft power are threatened by the presence of Turkey within its member states. Although recognized as a critical strategic NATO member, Turkey is actively attempting to create a new rulebook, deliberately disobeying the same principles that it is meant to abide by that. For example, purchasing Russian S-400 missile defense systems was a significant violation of NATO air defense law, but was appropriately accepted on the ground. Tolerance, of course, breeds (further) unilateralism and promotes hostility. Of course, Stoltenberg’s job is not an easy one. NATO works under consensus, with well- documented influence asymmetries within the 30-nation coalition. With Erdoğan, nonetheless, Turkey brings domestic authoritarianism and utter disrespect for the rule of law to the international arena.

These actions threaten NATO’s collective security and political ideals, as the Washington treaty states that the organization was „founded on the principles of democracy, individual liberty and the rule of law.“ The Secretary-General retains a neutral front and masks NATO’s apparent failure to behave firmly and step past the „hands-off strategy“ criticized by Greek Prime Minister Kyriakos Mitsotakis. Or, outsources control altogether powers that be, the more he disservices the institution he is supposed to represent. Despite its strategic importance, the political situation in Turkey and its dictator’s actions demand a harsh response from NATO as this nation threatens the organization’s political credibility.