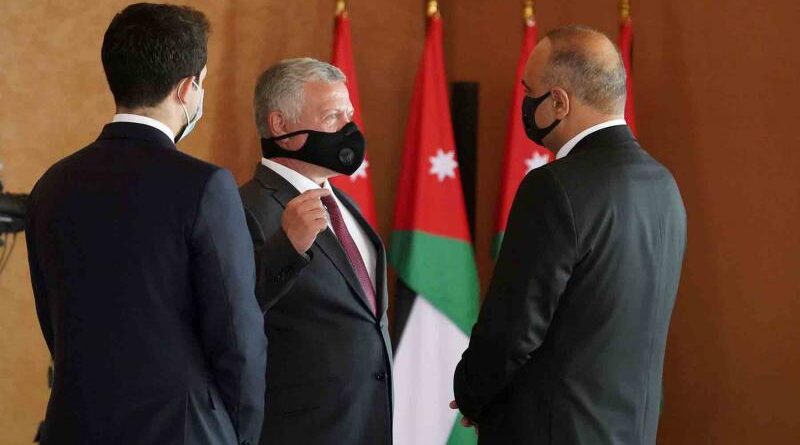 A new government has been sworn in by the King Abdullah II of the Hashemite Kingdom of Jordan in the midst of a raging pandemic, percolating refugee crisis along with a surging economic predicament exacerbated by restrictions on personal freedoms to contain the Covid-19 pandemic. The government is to be headed by Prime Minister Bisher al-Khaswaneh who supervised the parliamentary elections in November. Khaswaneh’s family has been entrenched in Jordanian politics for decades and as a consequence is part of the political elite which was subsequently a compelling factor in his previous appointments as Minister of State for Foreign Affairs from 2016 to 2017 and Minister of State for Legal Affairs from 2017 to 2018.

Furthermore, Khaswaneh served twice as palace advisor to King Abdullah and in his capacity as a diplomat, participated in peace negotiations with Israel. However, the focus during the Prime Ministership of Khaswaneh is likely to be on the International Monetary Fund (IMF) reforms including structural ones to deal with unemployment[i] along with discharging his duties as the Minister of Defence.[ii] One focus that is essential for the survival of the state however not guaranteed id the political reform for the retention of tribal support whose assistance is imperative in keeping the Islamist and liberal political forces at bay leaders for the political establishment. The tribal leaders are leveraging their support and have warned of protests similar to as witnessed in Tunisia and Egypt if measures are not undertaken. However, the cabinet is to head is comprised of 32 ministers and is populated by technocrats along with conservatives;[iii] including 8 of whom served under the previous Prime Minister Omar al-Razzaz.[iv] Razzaz was selected and tasked to quell the major demonstrations in 2018 galvanized to oppose tax requirements undertaken to comply with IMF’s conditions necessitated due to Jordan’s governmental debt.

However, the new cabinet is tasked with completing not the structural reforms but also with the development of clear out programs with precise agenda and quantifiable measures to permit for assessment and follow-up considering the “global epidemiological” scenario[v]. The measures are expected to lead to a perceptible effect on lessening the pandemic’s economic consequence, motivating sustainable growth, and focusing on enhancing the competitiveness of productive segments of the economy. Furthermore, 10 ministers entrusted to carry out these measures who have served in previous governments have likewise been appointed to the new cabinet while 13 new ministers have been appointed including the interior, health, and transport ministries.

However, King Abdullah II retains sole control over nominations of ministers. Khaswaneh is the 13th prime minister to be appointed by the current King. In Jordan, prime ministers have been appointed to carry out specific tasks, to pass certain laws, or to settle national disasters even regional concerns of importance. As such another dimension emerges wherein the parliamentary elections to be overseen by Khaswaneh are banked on to ease the widespread disillusionment around fiscal adversities and restrictions including on political rights. The elections will be overseen under an electoral law that relegates the leading Islamist and other parties to ascertain the victory of pro-government nominees.[vi]

The latest government is expected to see commitments unfulfilled by the outgoing government and further develop policies centered on national priorities including a stimulus package. However, some of the criticism leveled at the formation of the cabinet has been the diminution in the number of women represented in the cabinet where only three women ministers are present and represent only 9% of the cabinet in a country where women make up 49.38% of the population[vii]. Furthermore, some ministers elected to the cabinet has actively disparage women. This has culminated in the exclusion of women, especially in the healthcare sector who are actively working to mitigate the Covid-19 pandemic from decision-making which might subsequently result in adverse implications.[viii] Therefore, compelling some observers to opine that the trust-building must also feature in the priorities of the new government which has been rendered asunder by the pandemic necessitated measures.[ix]

Additionally, some of the most vital posts in the new cabinet is the finance ministry which Ali Al Ayad, a diplomat, resumes as the Minister of Media for the second time hitherto having served during the Arab Spring. Ayad has served as Jordan’s Ambassador to Israel, Deputy Ambassador to the US, and Prime Ministry political affairs unit’s director. Another pivotal figure is likely to be Umayya Toukan who will take over the Finance Ministry and who formerly served as finance minister in 2014 when Jordan’s debt crisis was its zenith. Toukan has been touted to have a great understanding of Jordanian fiscal policies which warranted his governorship of the Central Bank of Jordan and work on Jordanian monetary policy when he was a senator. Another extremely pertinent position is for Dr. Obeidat, who was the spokesperson and worked on the Covid-19 taskforce for the government will be the Minister of Health.

Other important ministers in the current government include Tawfiq Basha Al Halalmeh who is to serve as minister of interior. Halalmeh was the first director of Jordan’s ascendant security force, the gendarmerie who are employed to disperse protests. He likewise ran the country’s anti-terrorism as well as domestic security. Al Halalmeh was later named a senator and remains a prominent voice in Jordan’s security segment. This appointment can be instrumental for King Abdullah to maintain control if protests similar to those in 2018 erupt due to the health and the economic adversities being faced by the country.

However, breaking the mold is the presumed Minister of Labour, Maen Qatamin who has been artistically critical of the government. Mr. Qatamin is not only an economist but a political social media influencer utilizing his YouTube channel to the fullest where he analyzes assertions and strategies of the government while exhibiting potent admonitions articulated in local as well as popular expressions favored by Jordanians. His appointment has been viewed as an effort to cultivate an unbiased minister who holds no links with political parties as well as a conventional power hierarchy.

Nonetheless, Ayman Safadi will retain his position as the foreign minister which he first acquired in 2017. He has strengthened his position by carefully weighing foreign policy consideration of Jordan and its relationship with its allies, especially the US. This is evident in his been given the duties of the Deputy Prime minister on top of his foreign ministerial portfolio. Moreover, Safadi is remarkably experienced having worked as an advisor to King Abdullah, employed in the Media department of the Royal Court as its director, gaining knowledge operating as the spokesperson for the UN Mission in Iraq (UNAMI) and at newspapers.[x]

Some considerations of the new cabinet include Jordan’s dependence on foreign aid which flows into the country to accommodate refugees from Syria which could be jeopardized due to the pandemic. The new cabinet is also charged with the establishment of the National Epidemiology and Infectious Diseases Centre which will deal with not only present challenges but the future ones as well.[xi] Energy utilization in each sector, development of the social safety net, bolstering the agricultural sector to improve food insecurity, planning for tourism diversification as well as its improvement as a product is part of the agenda to be pursued by the new cabinet.

Yet, the country must work to enhance political reforms as Jordan seems to be plagued by legacy-based rotation of authority and a cycle of consistent personalities in places of power.[xii] These reforms must also work on the integration of disenfranchised youth and underrepresented women in political roles. Jordan has been focusing on the development of a National Youth Strategy (2017-2025). Reservations for women have been made in the parliament wherein women have been allocated 15 seats in a 130-seat parliament along with minorities who have been allocated 12 seats. One of the reasons that have been cited for the low participation of women at the national level in politics has been the institutionalization of the patriarchy along with the durable tribal links which reinforce social norms that actively exclude women from the public sphere. The exclusion impacts civil society wherein inclusive policies which factor in inter-generational, class, and social divisions are led by the youth, women, and minorities are needed for as the current political leaders are overly ingrained in the political system to be able to spur change. Jordan is also in the unique position to be able to empower its youth through assistance partnerships and funding.[xiii]

Yet, neo-tribalism which is observed in local-level political order which has been stated to act as a barrier to the entry of youth and women into politics. Political reforms to minimize tribal favoritism can be exceedingly challenging as tribes have emerged as a crucial facet in regime preservation and a source of legitimacy to the monarchy. Tribes have been traditionally established themselves as a dependable way to ensure societal organization. This has resulted in tribal nepotism which has been alleged to aggravate efforts to safeguard Jordan’s stability. The new cabinet must also aim to tackle the intense corruption that permeates the system along with a bloated bureaucracy which has led to the disenchantment of voters and is a probable factor in increasingly lower voter participation each year.[xiv] Excessive centralization of power in the monarchy can likewise result in dissatisfaction which can then consequently fuel radicalization[xv] and [xvi] voting based on tribal identity rather than national welfare. Furthermore, perception, as well as reality, enforces the belief that the democratic process is not a vehicle for change but rather for international consumption with power enduring in the hands of the monarchy.[xvii] Therefore, political, economic, and societal reforms remain ever more important especially as the current election witnessed low turnout, only the requisite number of women being elected while the parliament, as well as the country, remains dominated by businessmen and envoys of formidable tribes.[xviii]

Embassy of the Hashemite Kingdom of Jordan in Washington, D.C. http://jordanembassyus.org/news/king-tasks-khasawneh-forming-new-cabinet

Embassy of the Hashemite Kingdom of Jordan in Washington, D.C. http://jordanembassyus.org/news/king-tasks-khasawneh-forming-new-cabinet