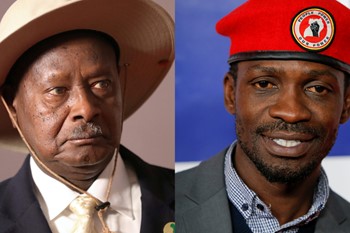 The January elections in Uganda were the battleground for a generation faceoff.  Robert Kyagulanyi, widely known as Bobi Wine, challenged the longtime president Yoweri Museveni in a fierce presidential campaign that showed that the new generation of Uganda is seeking change. During the presidential campaign and the days before the election, violence broke out in different parts of Uganda. The country has never had a peaceful transition of power since its independence from The United Kingdom in October of 1962.

Yoweri Museveni, 76, represents the old regime. He pursued his university studies in Dar es Salaam, and while in exile in Tanzania he became involved in politics and founded the Front for National Salvation political party. In 1979 he returned to Uganda and played an important role in removing the infamous dictator Idi Amin from power. However, Museveni didn’t gain power until 1986, when with the help of the National Resistance Army he overthrew Milton Obote from power with a guerrilla war. Museveni has been president of Uganda ever since, by winning presidential elections from 1996 to 2016.

Robert Kyagulanyi Ssentamu, 39, better known by his stage name Bobi Wine has been a major critic of Museveni in recent years. After graduating from Mekere University with a music degree in 2003, he launched his career in music, becoming one of the most successful East African artists. In 2017, after criticizing the Museveni administration through his music, he decided to get involved in politics, and he became an MP in the Ugandan parliament as part of the Forum for Democratic Change (FDC) party. Since then, he has been more and more outspoken – especially on social media – about his dissatisfaction with the Museveni presidency, gaining support from the Ugandan youth, who makes two-thirds of the Ugandan population. Bobi Wine’s popularity, however, became a problem for the government in power, and since his election in 2017, Wine has been the victim of violence and arrests. In 2018, he was arrested at a rally, and was detained and allegedly tortured. He had to seek medical help in the United States. The violence didn’t scare him off, however, and in 2019 he announced he was going to run for president in the 2021 elections.

The two candidates represented two very different groups of Ugandan society; Museveni had the support of business owners and the military, as well as the older generation of Ugandans, who trust him because he brought peace and security to the country after the violence of the Amin’s dictatorship, and pushed out of the country Joseph Kony’s infamous and ruthless Lord Resistance Army (LRA). He also improved the country’s infrastructure and implemented policies to tackle the HIV/AIDS epidemic. Older generations remember younger Museveni, the 41-year-old leader that promised to bring peace and prosperity to the country after years of atrocities and instability. When he still believed that older presidents who did not want to resign and give up power were a problem for Africa. He clearly forgot what he believed in, since in recent years he convinced the parliament to change the law, and allow people over 75 years old to run for president. Bobi Wine had the support of the younger generation, especially the urban youth, who is exasperated by the high rates of unemployment, corruption, and the lack of effectiveness of local politics.

Museveni and Wine’s campaign approaches were very different. Museveni relied on traditional media – radio, and TV – and announced his agenda through long and dense speeches. Bobi Wine’s strategy was to launch a campaign on social media and spread his message through the very powerful hashtag #WeAreRemovingADictator. He only partially relied on traditional media, since in the past he was denied interviews. Through social media, he was also able to spread his message to a wider and international audience, capturing the attention of foreign observers. Wine also continued to use his music and rallies to spread his message of a new Uganda.

Even though Bobi Wine has not been immune to criticism – he has been accused of not having a clear political plan, and a couple of international organizations have accused him of homophobia – he is still the most popular candidate to challenge Museveni. Kizza Besigye was Museveni’s opposition leader for decades. He was a former ally of Museveni, and even though he is younger – 64 years old – he is still considered part of the older political elite by the youth. Like Bobi Wine, Besigye also faced violence during the presidential elections in 2016, and he did not run for president this year.

In November 2020, Bobi Wine and his team were the targets of violence and police brutality. During a campaign rally in Luuka, a city East of the capital Kampala, Wine was arrested for violating COVID-19 rules by having a gathering of more than 200 people. Clashes broke out and 54 people were killed. Violence continued throughout the following weeks. Repression was only on the streets. Two days before the elections, the government imposed a social media shutdown throughout the country as retaliation against Facebook and Twitter, who deleted some pro-government accounts that were spreading misinformation. The social media crackdown was also used to limit the spread of pro-Wine information.

On January 14th the Ugandan people went to the polls and voted for a new president and new representatives in parliament. Yoweri Museveni won the elections with 58.64% of the votes, while Bobi Wine gained 34.83%, and was able to gain 61 seats in parliament making his seven months old party – the National Unity Party – the main opposition party in the country. Even though Museveni’s win is not a surprise, he won by gaining the lowest percentage in decades. Two-thirds of the Ugandan population is under 30 years old, and it is clear that Wine’s message for change is widely shared by a growing part of the population. It is also clear that Museveni believes that Wine is a believable threat to his presidency, since he had to use violence, COVID-19 as an excuse to prohibit pro-Wine rallies, and he shut down social media platforms in an attempt to silence him. He even allegedly killed and injured members of Wine’s team between 2018 and 2020. He probably did not touch Wine in fear of making him a martyr. He knows the world is watching, and he cannot have the international community be involved in Ugandan domestic issues.

Even though Wine was not the winner of the elections, it is clear that change is near for Uganda. Like it occurred in many other countries across Africa in the past decade, the end of a decade-long presidency is approaching, and the Ugandan youth is gaining more and more courage to challenge the old regime, guided by a new charismatic leader.

Lirri, Evelyn. (2021). Uganda: ‘This Generation Is Yearning for Change and I Am Here to Deliver It’ – Bobi Wine. The Africa Report. (www.theafricareport.com/57607/uganda-this-generation-is-yearning-for-change-and-i-am-here-to-deliver-it-bobi-wine)

Rop, Jolly. (2020). The Rise of Bobi Wine: How A Rapper From the Slums Is Igniting A Revolution in Uganda. Harvard International Review. (hir.harvard.edu/who-is-bobi-wine)