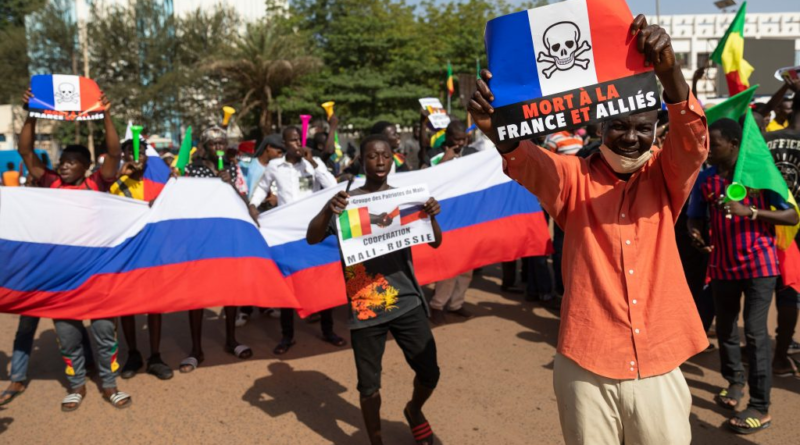 While the Western attention is on Russia’s actions in Ukraine, Russia’s influence in the Sahel region is already rising. On the 25th of April, a jihadist group in the Sahel conflict-torn state of Mali claimed to have captured a fighter from the Kremlin-linked Wagner mercenary group. The Kremlin linked-mercenary group is reported to be fighting Islamist militants in the West African country. Almost a month before, on April 20th, a Russian military advisor was killed in Mali by a road bomb. The Russian advisor was reported to accompany a Malian army unit that was attacked by a roadside explosive device in the town of Hombori. Meanwhile, France’s troops that were present in Mali since their intervention in 2013 decided to withdraw. The main goal of France’s presence in Mali was fighting against Islamic extremists. The questions thus arise on why did France withdraw from Mali and what does the ongoing presence of Russia in Mali indicate?

THE BEGINNING AND THE END OF FRANCE’S PRESENCE IN MALI

In 2013, the President of France, Francois Hollande said that the French troops are participating in operations against Islamists in northern Mali. The operation was totally in compliance with international law, and it was approved by the President of Mali, Dioncounda Traore. President Traore had already declared a state of emergency in the country. The French public rhetoric either by the Foreign Ministers or the President was clear and precise regarding the military presence in Mali. The French troops are intervening in Mali with the aim to do everything possible to stop any jihadist movement and eradicate every terrorist element within the country and defend the territorial integrity of Mali. Moreover, Mali was a French colony until 1960 and around 6,000 French citizens were reported to live in Mali at the time when France began the military operation. Seven French hostages were already reported to be held hostage in the region The French military intervention in Mali was supported by many countries such US, UK, and organizations such as European Union and African Union.

On February 17th of 2022, France and its European allies declared that they would start withdrawing their troops from Mali. Such action was a result of deteriorating relations and growing tensions between the military-led government of Mali and France. The government of Mali has repeatedly asked France to withdraw its troops immediately from the western Sahel state „without delay“. A government spokesman in addition said that the French troops did not deliver satisfactory results during their nine-year presence in the country. The relations between France and Mali were strategic and had a shared aim of fighting Islamic terrorists. However, in 2020, the relations changed.  In August 2020, an army-led coup by Colonel Assimi Goita ousted democratically elected President Ibrahim Boubacar Keita. The junta did not agree to hold democratic elections and says it will hold on to power until 2025. France’s ambassador was expelled after his objection. Moreover, Mali’s Prime Minister Choguel Kokalla Maiga has accused France of training “terrorist” groups operating in the West African country. He added that French troops had formed an enclave in Kidal, a town in northern Mali, and gave it a “terrorist group” known as Ansar al-Din, which is allegedly linked to al-Qaeda. Additionally, France was accused by the Mali government of banning the country’s military from entering the territory.

It is not only at the government level where the relations are worsening. The Mali civil society is dissatisfied with the performance of the French military in the country. The main reason is that the terror attacks have in fact increased and not decreased. There are more Malians joining the terrorist groups and the national armies have suffered high casualties against those groups. Meanwhile, the number of internally displaced people is growing rapidly, and France’s aim to prevent civilian casualties has not been successful. Many Malians ask France to leave the country if the terror problem is not solved. Some locals have even called the presence of France an “occupation” bearing in mind the past with the colonial power.

The security crisis is not actually solved in the whole region of Sahel since France came. It has spread to Burkina Faso and Niger, with many different groups, some related to al-Qaeda or the Islamic State group. Despite the withdrawal of the French troops from Mali, France is willing to provide any protection for the UN stabilization mission in Mali, MINUSMA, and other foreign forces in the country. From the perspective of the neighboring countries of Mali, the concern of that that the withdrawal of France from the country could lead to further destabilization of the region was expressed by the President of Ivory Coast, Alassane Ouattara, and Ghana’s President, Nana Akufo-Addo.

Wagner Group is a private military company that has suspected links to the Kremlin. The unit appeared in 2014 when Russia annexed Crimea. According to the US government, the entity is financed by a Russian business that has close links to Putin, Yevgeny V. Prigozhin. The group is not registered as a legal entity and the members are illegal under Russian law. However, Kremlin denies any link to the group although Putin has been photographed next to Utkin (a retired Russian military officer who chose the name of the group). The group has fighters from different backgrounds such as Syria or Libya. Wagner Group has operated in various countries such as Libya, Syria, Ukraine, and the Central African Republic. In addition, the group is involved in other African countries such as Mozambique, Sudan, and Mali.

The Wagner Group arrived in Mali in December 2021. The deployment of the group was condemned by the United States, various European countries, and Mali’s international partners. Since then, the French government and CSIS satellite imagery analysis reveal that The Wagner Group has been constructing military camps, and many troops transport trucks or armored vehicles were noted in the region. The Wagner Group is also known to be training soldiers from Mali. A Russian diplomat has lately stated to U.N. Security Council that Wagner Group is providing training to two hundred Malian service members and nine police officers. Wagner group’s activity is not only limited to the military scope. There is a presence of geologists or lawyers that are linked to the Wagner Group. Moreover, numerous social media accounts have shared doubtfully sourced images that show Malian soldiers being trained by Wagner members.

Wagner Group’s mercenaries have been connected to several incidents in Mali. So far, several hundred civilians have died in Mali from the massacres in which the Russian group is involved. The Guardian has observed the internal Malian army documents which confirm that Russian mercenaries were present in many operations where civilians were killed. The NGO Armed Conflict Location and Event Data Project (ACLED) has gathered data that indicate that 456 civilians died in nine incidents involving Wagner and Malian forces just between January and April of 2022. On April 23rd, a confrontation between militants and a joint patrol of FAMA and Russian instructors was described by an internal memo. The clash which occurred in the villages of Mondoro and Boni resulted in the death of one FAMA and one Russian while four Russians and six FAMA were wounded. British officials have expressed their worry about the deterioration of human rights situations in Mali as more Wagner fighters are being deployed. A Human Rights Watch report alleged that forces in the Central African Republic have identified Russians to have murdered and tortured residents since 2019.

On March 27th of 2022, a massacre that resulted in the death of hundreds of people took place in a village called Moura. The area where the village is located has been controlled for several years by militants from the al-Qaida-linked Group of Support for Islam and Muslims (GSIM). The militants have imposed their strict rules based on Sharia law and forced the people to follow them. According to the report to the Guardian from a witness-Amadaou Barry many helicopters suddenly appeared, troops disembarked, and the Islamist militants shot at them. The Malian army opened fire on the crowd and many civilians were killed as a result. Other witnesses told the Guardian that the operation was led by some white people that were identified by some as Russians.  Also, a researcher for Amnesty International in Mali, Ousmane Diallo, has confirmed from other testimonies that the soldiers who landed in Moura were white. Moreover, Russia vetoed a bid at the United Nations to command an independent investigation into the massacre, and the Mali government has blocked any effort by the UN to send a team to the village.

IS HISTORY REPEATING ITSELF?

Russia’s influence in Mali is not recent. The Soviet Union had an interest in the African country since 1960 when the Soviet Union recognized Mali’s independence and both countries signed cultural and trade pacts. According to Soviet Military Policy, Mali’s first president Modibo Keita welcomed Soviet support in order to reduce Mali’s dependence on France and to increase his credentials as a radical socialist African leader. The regime which overthrew him in 1968 improved relations with France and other Western countries but has continued to seek military assistance from the USSR and the army officers who are now Mali’s political leaders are almost totally dependent on the USSR for military equipment and training. Similarly, we see an analogous pattern in Mali where the country is orienting to Russia for aid via Wagner Group and reducing France’s footprint.

WHAT IS NEXT FOR RUSSIA, MALI, AND THE WEST?

As France is currently withdrawing the rest of its troops from Mali, it seems likely that Russia will use this opportunity to increase its presence in the country. Russia has been successfully using the destabilized situation in various countries in order to justify its involvement, for example in Syria-2015 or Kazakhstan-2022. Russia can do the same thing in Mali and use the Wagner Group’s “ghostly” nature to have more success. Sorcha MacLeod, chair of the United Nations Working Group has also confirmed that “The Wagner Group operates in a situation of opacity, there’s a real lack of transparency and that’s the whole point. Their structure allows them to have plausible deniability and to create “distance between the Russian state and the group.”. Russia can expand its military and economic activity in Mali while preserving its political interest to keep the liberal democratic countries out of the Sahel region. The fear that Russian influence could destabilize Mali and the region as a whole is feasible and it is stated by the majority of European states. As the Russian actions in Ukraine demonstrate, the authoritarian regime of Putin can be expected to inflict brutality in Mali, accelerate the increase of terrorism, and destabilize the Sahel region. It is now in hands of the EU and the US to reconsider their foreign policy and strategy towards Mali, and decide how to respond to the growing influence of the Wager Group.

Source of the picture: https://www.euractiv.com/section/global-europe/news/deal-allowing-russian-mercenaries-into-mali-is-close-sources/

Aljazeera (2021). Mali accuses France of training ‘terrorists’ in the country. Aljazeera, accessed May 24, 2022. Available at: https://www.aljazeera.com/news/2021/10/8/mali-accuses-france-of-training-terrorists-in-country

The Guardian (2022). Russian mercenaries linked to civilian massacres in Mali. The Guardian, accessed May 24, 2022. Available at: https://www.theguardian.com/world/2022/may/04/russian-mercenaries-wagner-group-linked-to-civilian-massacres-in-mali

Ramani, S (2020). Why Russia is a Geopolitical Winner in Mali’s Coup. Foreign Policy Research Institute, accessed May 24, 2022. Available at: https://www.fpri.org/article/2020/09/why-russia-is-a-geopolitical-winner-in-malis-coup/

Thompson, J (2021). The WAGNER Group has its eyes on Mali: A new front in Russia’s irregular strategy. Modern War Institute, accessed May 24, 2022. Available at: https://mwi.usma.edu/the-wagner-group-has-its-eyes-on-mali-a-new-front-in-russias-irregular-strategy/