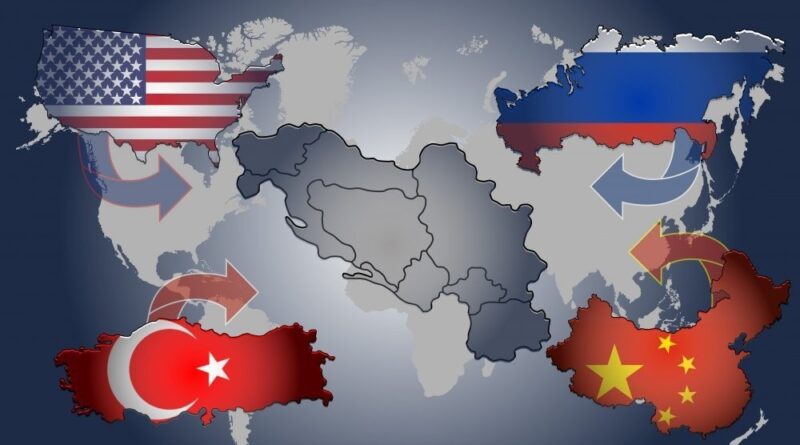 The Russian aggression against Ukraine has alerted pundits and scholars for potential unrests in the Western Balkans. The danger of ethnic clinges, territorial disputes and historical sentiment, all supported by the Kremlin propaganda, might emerge yet again.

In recent months, one can also observe the interferences of China, Turkey, and Iran, forcing the United States to reenter the once-abandoned region. Yet Washington‘s strategy remains unknown, especially when it comes to analyse the means through which to counter non-Western actors in the region. There is no doubt that, after the 24th February 2022, US is monitoring both risks and opportunities in the Western Balkans.

The History of US Engagement in the Western Balkans

The US involvement in the Western Balkans dates back to civil wars (1991-2001), following up the breakup of Yugoslavia. Ultimately, the US became the driving force behind the international alliance, aiming to end the conflicts in Bosnia and Herzegovina and then in Kosovo. After a decade of intense diplomatic and economic efforts for the post-conflict reconstruction and stabilization, the tangible results were delivered as lbania and Croatia entered the Alliance in 2009, followed by Montenegro and North Macedonia in 2017 and 2020 respectively. To add up, the latest EU member was Croatia in 2013.

Since 2008, the US presence steadily waned in favor of the EU and NATO’s commitment to secure relative peace and prosperity in the region. However, the normative implementation of EU/NATO policies failed in the region. In this vacuum, old issues were reused by local politicians to criticize the “West“. The deep-rooted problems in the region, such as democracy decline, erosion of the rule of law, increased corruption and nepotism or weakened economic prosperity, seem all to be the most prevailing factors of the Western Balkans. Even the major treaties did not manage to provide tools that are needed for forestalling instability in the region.

The Dayton Peace Agreement (1999) provided rather a cease-fire agreement than a constitutional vademecum for settling peace, or establishing democracy, in Bosnia and Herzegovina. Thus the lack of constitutional reforms have been opening up space for old-fashioned ethnic disputes across the three-entity country, thereby leading the country to today’s standstill. Whatsmore, the EU does not seem to have such an appeal for many Western Balkan countries as it might have in the 2000s. Even the sometimes called Croatia’s “success model“ is apparently showing older problems that are resurfing, such as ethno-nationalism, public health management along with recent ones of earthquake repairs or vaccination rates during the pandemic (Crnić 2022).

Despite the above mentioned problems and challenges, the Western presence improved in many ways the local condions. With the war in Ukraine comes a new opportunity for the West, and mainly for the US, to engage again in the region and project a long-overdue approach.

In October 11, 2022, the Albanian-American, Bosnian-American and Montegrin-American communities published a joint letter calling the US Senate and House of Representatives to commit a stronger presence in the region of Western Balkans. According to the document, the contemporary situation is worsened due to raising military actions done by the Serbian government. Its current president, Aleksandar Vučić, is clearly determined to complete the power gap over Serb-inhabited parts of Kosovo, despite many Kosovo Serbs (especially those in the Southern Kosovo) do not seem to follow Serbia. Yet still, Vučić recently ordered to pull tanks and other armored vehicles to close the border after Serbia reneged on a licence plate agreement negotiated by the EU between these two states almost a decade ago. The US presence proved its relevance in this dispute as it was mediated and settled down by the American diplomacy in Belgrade and Pristina. Although it did not solve the issue at stake, it played definitely a role in overcoming a potential escalation.

In Bosnia and Herzegovina, Vučić’s closest ally in the region, a Serb member of Bosnia’s tripartite, Milorad Dodik, is also a strong advocate of secession of the Serb-controlled parts of the country. In 2021, for example, he pushed to withdraw Bosnian Serbs from the joint Bosnian army and judiciary and tax systems. As a result, he is now under US and British sanctions such as visa bans or asset freezes. Despite sanctions, his rhetoric to call for Serbs in Bosnia to have their state seems to be persistent.

But even Aleksandar Vučić and Milorad Dodik are constrained by what is happening in Ukraine and the gradual Russian influence in the Western Balkans. While Belgrade, for example, has not sanctioned Moscow in response to its aggression in Kyiv, it supported other sanctions against Russian proxies. Also, Serbia voted for a UN resolution condemning the war in Ukraine. Vučić is portraying himself more on the EU-Russia trajectory rather than as sole Moscow’s ally or “little Putin“. The fact is that Serbia is the largest regional recipient of EU pre-accession funds, but at the same time, it’s largely dependent on gas from Moscow (Lichtenstein 2022). In a similar tone, Milorad Dodik delayed the pulling of Republika Srbska out of Bosnia and Herzegovina’s institutions by six months. Of particular interest for the US should be also the alliance between the Croatia government and Dragan Čović, the nationalist Bosnian Croat leader, who calls for further ethnic partioning of Bosnia (Bassuener; Vogel 2021).

Croatia‘s relevance for the US is primarily due to the Three Seas Initiative (3SEAS). This regional group, mostly former communist countries that see membership in NATO and close security ties with the US, focuses on infrastructure covering energy, transport, and the digital economy. Washington substantially funds the whole project. Croatia’s position in this project is essential for the US as it is the only Western Balkan state participating. Via 3SEAS, the US primarily focuses on competing with China and Russian influence in the region. By investing in regional projects, such as a compressor station at Croatia’s gas transmission system or the modernization of the port of Rijeka to Croatia (Stratfor 2020), the Trump and now Biden administration is still determined to hold its position here. As the Secretary of State, Anthony Blinken (2022) proclaimed, „the Russian aggression on Ukraine has made the work of the Three Seas Initiative even more urgent. “

Another challenge for the region is China, Iran, and Turkey’s gradual influence. Though primarily economic, Beijing also seeks to secure its political and military goals. China poured investments into infrastructure capacities, energy security, and export growth. Under the Belt and Road Initative (BRI) and other projects, the main target in Serbia is the modernization of the Budapest-Belgrade railway, which should be finished by 2023. China has significantly upped its investment activity. According to the National Bank of Serbia (2021), Chinese investments have topped 2.2 billion dollars since 2009. More recently, it also seeks opportunities to engage in local military disputes. The prime example is the delivered airplane defense system to Serbia.

The role of Turkey, on the other hand, seems to be less impactful than the Chinese one. Yet, its geographic proximity and historic ties make the Western Balkans an important region of Ankara’s foreign policy. The most significant aspect of Turkey’s expanding influence in the Western Balkans can be observed in its investments and the spreading of Islam in Muslim-majority countries such as Albania, Bosnia, and Herzegovina. Still, as a NATO member, its growing presence in the region does not raise so many eyebrows in the US environment as Russia or China does.

Iran’s presence might be more alarming to the US. Mainly, by its cultural sphere, the Teheran government is seeking to push back the “Euro-American“ world order and summon the Muslim population in the region by spreading the discourse of Islamist ideology and the Iranian narrative of Shiite Islam. By establishing organizations such as the World Center of Islamic Sciences, Islamic culture and Communication Organization, or Al-Mustafa International University in Albania, Serbia, Kosovo or Bosnia and Herzegovina (Berkolli 2021), the cultural influence is steadily rising.

Recently, Tirana-Teheran relations have also deteriorated as Albania cut diplomatic ties with Iran and expelled its diplomats over a cyberattack that caused Teheran to launch. The US has backed the Balkan state. Washington condemned the cyberattack and imposed sanctions on Iran’s intelligence ministry (Motamedi 2022). What is also interesting is that the Biden administration plans to re-open the Iran nuclear deal (JCPOA) negotiated in 2015. The cyberattack dispute now may negatively impact the upcoming dealings with Iran.

US Pivot to the Western Balkans?

Despite several suggestions on how the US should tackle the conflicting lines in the Western Balkans (see, for example, a https://www.csis.org/analysis/confronting-stabilocracy-western-balkans-new-approach-us-assistance) the Balkans are not in the US’s political agenda. Therefore, there is no comprehensive strategy to have a leverage in the region.

The insofar official document outlining the basic framework of US policy towards Western Balkans, is the press statement from April 2021. It states its commitment to “supporting the countries of the Western Balkans on their path to European integration and membership in key European and Euro-Atlantic institutions“ (Price 2021). In the light of current war in Ukraine, the US commitment needs to take a bitter step toward the region’s security.

The Biden administration now seeks to conquer the Russian and Chinese involvement in the Western Balkans to intensify its presence in countries such as Montenegro, Serbia, and Croatia. Both countries remain committed to the process of European integration. Also, Montenegro belongs to NATO. At the same time, however, both states pursue a multi-sectoral policy, cooperating with China, Russia, the EU, and the US (Lachert 2020). Another vital element in conquering the Russian and Chinese influence is collaborating with Croatia policymakers in the Three Seas Initiative. This project is heavily supported by the US, which seeks to reverse the Chinese infrastructure investment plans and offer an alternative to Russian energy export.

Ultimately, the goal for the Biden and subsequent administrations is to reduce the tensions among the local politicians, recalibrate its policy toward development and restore the transatlantic influence by cooperating with the European Union and NATO. In order to achieve it, the US needs to:

As horrific as it is, the Russian aggression in Ukraine has also created an opportunity for the US to settle its influence in the still volatile part of Europe. Embarking on the idea of EU maintenance and limited NATO presence in the region, the US focused on Asia instead. After two decades of rather a dismal situation, now highly accelerated by the Kremlin propaganda and increasing nationalism, the need for the US assistance is strikingly apparent. The call for the Western unity has been embodied in support of Ukraine. The same has to be applied to the Western Balkans.

Open Letter: A Joint Response Towards Belgrade’s Threats to the Security of the Western Balkans. (https://medium.com/@Balkans.Joint.Statement/open-letter-on-serbian-aggression-in-the-balkans-d66ee517232b)