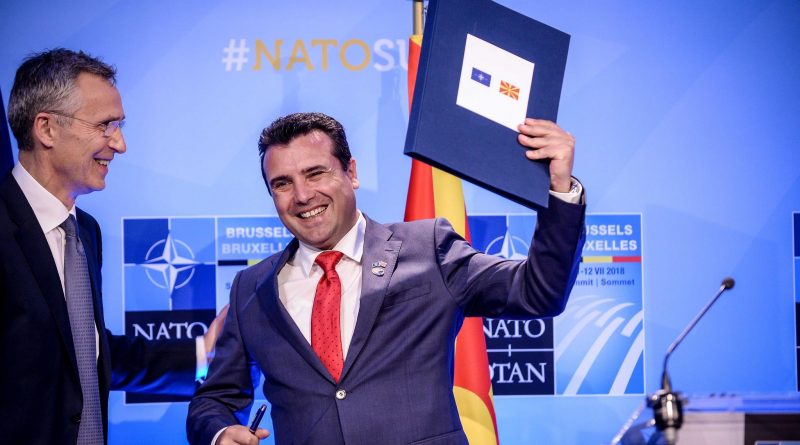 On the 27th March 2020 North Macedonia has handed over the “instrument of accession” to the US State Department, and so North Macedonia has become the 30th member of NATO. On the same day, NATO Secretary-General Jens Stoltenberg welcomed in his statement North Macedonia in “a family based on the certainty that, no matter what challenges we face, we are all stronger and safer together” (Defense News 2020), and three days later, on the 30th March, the North Macedonian flag was raised among other member states flags at the NATO headquarters in Brussels. How will this accession change the geopolitical map of Western Balkans?

First of all, the accession meant a great victory to the Macedonian government, which has been pro-NATO oriented since its independence in 1991 and decades-long cooperation with NATO forces, during which, thanks to NATO programs like Partnership for Peace, Macedonian army participated in different coalition missions (from Kosovo to Afghanistan), and NATO structures helped with different reforms in several sectors of ruling like defence sector or civil emergency (NATO 2009). However, the accession does not mean the end to all these reforms. There is still a long way for North Macedonia to adapt to NATO conditions and standards. Most importantly, as other European countries, it has to raise the defence budget. According to Military Balance journal, North Macedonian´s defence budget in 2019 was 8.31 billion Macedonian denars (around 152 million dollars), or 1.19 % of North Macedonian GDP (IISS 2020).

Secondly, it was also a victory for the Western countries in overcoming East-West tensions from the Cold War. It also means that Europe is one small step closer in uniting into one alliance with one goal- collective security not just of the sovereignty of all member countries, but collective security of the values like liberty, freedom justice, democracy, etc.

A victory for NATO means a geopolitical defeat for Russia, which is trying to gain support in Balkan countries and get them “on its side”. There were several attempts of Russia meddling in internal affairs of these countries. For example, in 2018 Greece accused Russia of bribing several state officials to stop a deal with Macedonia about changing Macedonia´s name, which would open the gates for Macedonia to join NATO (Smith 2018). Furthermore, there was an attempt to organize a coup in Montenegro in 2016 (backed by Russian intelligence) to take down a pro-European government and halt accession to NATO. The whole attempt was unsuccessful, and Montenegro joined NATO in 2017 (Balkan Insight 2018). On the other hand, Serbia is openly supporting Putin´s regime. Serbian´s regime is admiring President Putin, and based on their common roots and culture, (and religion) is trying to remain a Russian good friend. Russia has also its interests in Serbia (gas export for example), and it will definitely not allow Serbia to join EU that easily, and even if Serbia will show ambitions to join EU, it would have to make a compromise with Kosovo, which is unacceptable, as Serbia and Russia does not recognize Kosovo as an independent country. There are also hundreds of Russian think-tanks based in the country (Santora and MacFarquhar 2019). Last but not least, we cannot forget the Russian propaganda, which is spreading across the whole region, and Russian propagandist are currently using outbreak of coronavirus to show Russia in a better image.

Accession to NATO meant for North Macedonia solving disputes with its neighbour- Greece. Greece several times vetoed Macedonia during its negotiation process, due to its name, which is same as a province in North Greece, which is a birthplace of a famous Greek emperor Alexander the Great. Luckily, in 2018 both sides made an agreement, and Macedonia renamed as Republic of North Macedonia (Kitsantonis 2018), and it seems, that NATO creates a great opportunity for a deep cooperation between these countries in security affairs. As for relations with non-NATO neighbouring countries (Serbia and Bosnia and Herzegovina), there should be no negative influence of the relations, as a stronger presence of the Alliance in the region might bring only advantages to the whole region, as all Balkan countries´ security is linked together and cannot be divided (Živković 2020). North Macedonia will cooperate more with the Alliance countries now, but mutual cooperation between Balkan countries which are already in NATO and countries out of it, might bring at least one of the countries closer to the membership in NATO, or to start the negotiation process with the EU.

To sum up, accession of North Macedonia into NATO can bring more stability to the country, and slowly stabilize the whole region in many ways (economic, security, establishing and assuring democratic principles, fight against criminality, etc.). Also, it has shown, that NATO is not dead, it is once again opened to enlargement, and can stand its ground against current hybrid war led by Russia, and China as a new actor in Europe. Macedonia wants to be a part of the Western world, and is already doing some steps- not just reforms, but also its defence budget is rising (1.4 % of GDP this year) (Živković 2020) and also the army is being professionalized and ready to meet the NATO standards.