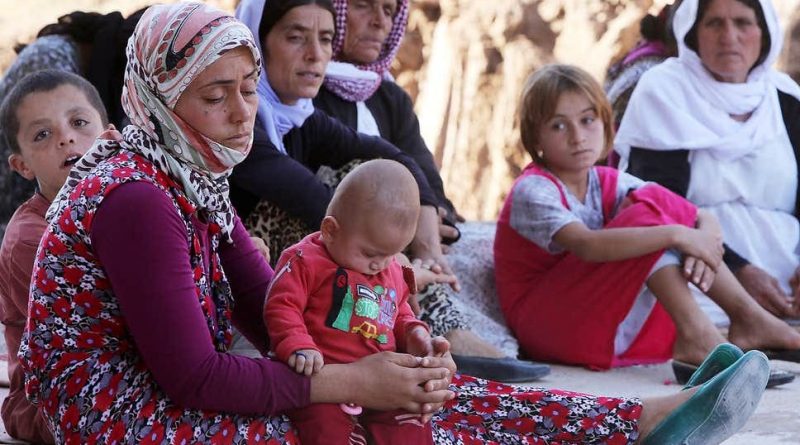 When ISIS attacked the Sinjar area in 2014, no one could know what would come next. ISIS has done extreme brutality to the Yazidi minority and established a very well managed system of sexual slavery. Yazidi girls and women have been separated from men, divided into groups according to their beauty and their age, and then have been moved to specific villages and even precisely chosen buildings. Later on, they have been sold to ISIS fighters and their supporters, have been forced to marriages, and have been raped and tortured, in many cases to death. It has happened several times that family members, mothers and daughters especially, saw each other during this cruel violence. ISIS has not made any differences between 5-year-old and 15-year-old girls. What matters is that according to Sharia law, ISIS members, and as they claim true Islamists, cannot have sexual intercourse with a pregnant woman (Novotná, 2017).

Even though ISIS has been perceived as defeated, this system of sexual slavery has been still existing and it has been even harder to detect and find those lost girls and women as ISIS has decreased its activities. Tens of thousands are still in slavery, almost 3000 women and girls are missing. Some of them were killed as ISIS felt it had been a critical situation for them. Also, many Yazidis who were captured by ISIS died during military attacks of the US and other military units. ISIS has also started using all kinds of social media to re-sell Yazidi women and girls to potential new owners in order to gain money for restoring its activities and to make the organization alive (Hagedorn, 2020).

Fortunately, many organizations through the years have been working very hard to develop complex programs to help Yazidi minority to reintegrate them into the society, and to assist girls and women overcome what they have experienced. Furthermore, many secret underground units have been set up and have helped to free many of them. Moreover, there have been many cases when families had to try to collect enough money to buy back their relatives (Rahman, 2020).

The breaking point has become when Iraq started official procedures against ISIS fighters and those responsible for capturing Yazidi women and girls. Even though these trials have been in presence since 2018 and crossed the number of 20 000 sentenced people, in terms of Yazidi people, this year has been the crucial one (Becker, 2020).

These trials are special not only because of the number of accused persons but also because of the cruelty of the act of violence. Some of Yazidi girls and women, who survived the slavery and being sold to another owner, came and collect the rest of their braveness and openly spoke in front of the curt and audience, and gave very detailed statements about what they experienced. It is not essential just for the trial as such. From the psychological point of view, it is very difficult and sometimes impossible for the victims to speak about experienced rape and torture. As some of them were able to do so, it might help them to recover in a shorter period of time and to be able to overcome PTSD and other consequences. From the social as well as a political point of view, an open confession about rape is extremely rare in the region. Furthermore, the fact that Iraq has started these trials has shown its will to perceive rape and violence on women as a serious and cruel crime. What is very important to mention is that under Iraqi justice, it does not recognize a rape under marital status as “rape” and therefore a crime (Rubin, 2020).

All those responsible for the Sinjar massacre and sexual slavery, who have already been sentenced, got a death penalty. As the single trials sometimes took just a few minutes, international organizations focusing on human rights raised a question of whether human rights are abided. Another problem occurred during the trial where it was not added as an essential fact whether those sentenced individuals were supporting ISIS and acting in compliance with its ideology willingly, or whether it was the only chance how to survive or how to save their families. Moreover, during the first two years of these trials, there were several differences and inequalities between advocacy and prosecution. Considering democratic rules and human rights, both sides should have equal rights, not only to give details and oppose if some details are not trustworthy or validated. UN Security Council has been monitoring the situation very closely while having several concerns about Iraqi’s procedures in judicial matters (Wilgenburg, 2020).

Yazidi minority would like to see those responsible for the massacre in Sinjar and the system of sexual slavery getting justice for what they have done. It might be a relief for them to see that during the trials, they have a voice and ISIS has been judged not only for military and terrorist crimes but also for sexual slavery and genocide of Yazidi. Considering the long-term consequences of the genocide and slavery, Yazidi would be very interested in finding a new home, a new place where they can settle and rebuild their society, which has been almost completely destroyed.

Tanno, S. (2019). Yazidi woman who was held as a sex slave by ISIS calls for all of the captured jihadists to be tried like the Nazis were at Nuremberg, 31.10.2020, Daily Mail.  (https://www.dailymail.co.uk/news/article-7634443/Nobel-prize-winner-calls-captured-jihadists-tried-like-Nazis-Nuremberg.html).