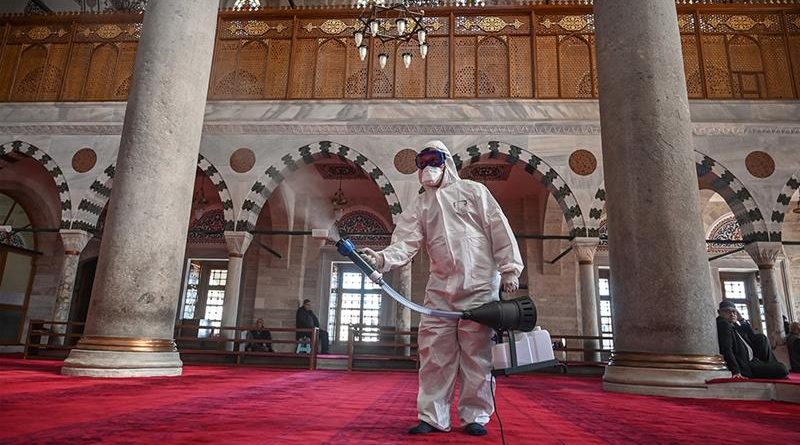 As the world has been dealing with the COVID-19 outbreak, the conflict situation in the Middle East is less echoing these days. The virus outbreak attracts the attention of countries around the world, because the danger it poses is critical. Taking into consideration the threat and severity of the situation, it is rational that Middle Eastern issues are less debated. However, COVID-19 does not avoid conflict zones in the region. From Idlib to Yemen, the virus has consequences on the ongoing conflicts.

The report of the Crisis Group claims that the population in areas affected by conflicts is highly vulnerable to COVID-19. The authors mention that the population is susceptible to be infected in the Middle Eastern regions where conflict is ongoing. It is mostly because these areas are under the militant´s group control. Even in the areas where the government holds power, the population does not get appropriate medical protections and support, as we can see in Lybia (Crisis Group, 2020). Crisis Group stated that the UN-backed government in Lybia received 350 million USD to fight COVID-19, but the lack of medical staff in the country causes poor performance in fighting the virus.

According to BBC News, in Idlib area-Syria, where massive fights among rebel groups and government do not seem to halt, COVID-19 threatens a population of one million. Most of them have fled their homes but got stuck in the refugee camps. BBC News brought the estimation that more than 100,000 residents could die due to the virus outbreak.

COVID-19 directly threatens the situation in the Middle East, as human losses could be high due to the poor conditions and lack of medical help. However, there are also indirect effects of the virus that can negatively affect the whole region.

Iran is one of the most affected countries in the area. The response of the government is not sufficient. As a consequence, approximately 50 people are infected every hour, accompanied by 5-6 lost lives per 60 minutes. The virus causes human losses in Iran but could also affect the stability of the country. Firstly, the regime could suffer from a lack of confidence, which might result in anti-government protests. Opposition in Iran has been oppressed for years, but the outbreak of the virus could cause that even the regime´s supporters would turn back and launch protests. Not only would it put the country into chaos, but protests could cause a clash between anti-government protesters and supporters of the regime. On the other hand, the regime could try to gain more power and control. That could put Iranian leaders into the position, where any restrictive measures would be pictured as necessary. Consequently, the regime would exploit the situation to grasp even more control and power.

Also, the Afghan peace-talks are threatened by COVID-19. After the signature of the peace agreement between the U.S. and the Taliban, the intra-Afghan negotiations should be launched. However, the COVID outbreak makes it challenging to gather all the involved sides behind one table. From one point of view, decreasing the number of negotiations´ participants could portrait agreement (if it is made) as less reliable. However, the reduction of Afghan and Taliban leaders could also make reaching the agreement faster, as a smaller number of leaders would be responsible for meeting both sides´ requirements. For now, it is difficult to say which scenario will be more favouring to the peace agreement and its lasting in Afghanistan.

There is also a threat that terrorist groups could misuse the situation for their profit. Despite the fact ISIS and Al-Qaeda have not increased their activities in the Middle East, there is a possibility they would do so. In particular, the governments in Iraq, Syria and other countries are fully occupied with the COVID-19 outbreak. This fact could decrease their ability to deal with the threat that terrorist groups pose. The offensive of ISIS, Al-Qaeda or any other terrorist group could find local governments unprepared, or even unable to face such actions. The threat of ISIS regaining lost positions in Iraq is still present. The situation we observe today can make terrorist´s efforts more threatening than before.

COVID-19 is threatening the Middle Eastern population in various ways. While human losses are the most direct consequence of the virus outbreak, it can cause instability and chaos in the region. Be it the threat of more restrictive behaviour of the Iranian government, the possibility that intra-Afghan negotiations would not take place or a threat from terrorist groups, the Middle East has to deal with the events of critical importance once again. Dealing with COVID-19 must undoubtedly be the number one aim of all governments. However, side-consequences should also be taken into account. There is a high chance that Middle Eastern countries will deal with COVID-19, but the aftermath of the virus could be even worse than what we observe today.