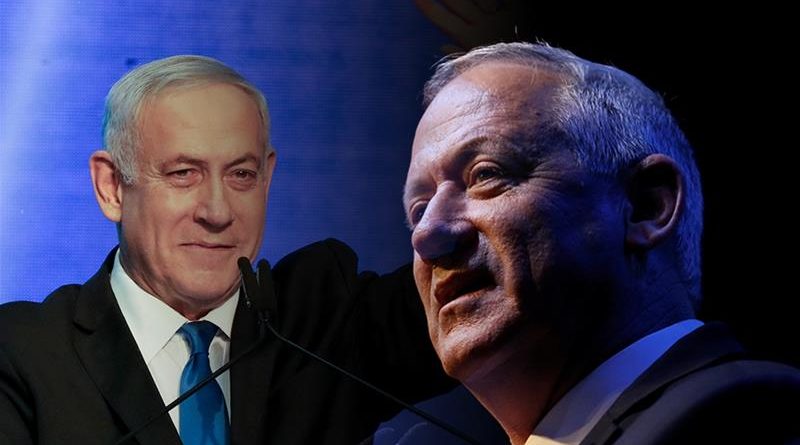 For over a decade, Israeli politics has been dominated by the face of the charismatic Benjamin Netanyahu. The Netanyahu family name is legendary in Israel; Benjamin’s older brother, Yonatan, was killed while serving as the commander during Operation Entebbe, a successful hostage rescue operation in Uganda, making his name a legend in Israeli society. While Netanyahu himself also served in the Sayeret Matkal, an elite wing in the Israeli military, he has benefited politically from the strong reputation his family carries in Israel.  As the leader of the Likud party, he has managed to become a popular figure among Israelis and is perceived as a strong leader who has steered Israel through economic prosperity, stability and security. After winning five elections and reaching three stalemates against rival parties during the past three elections, Netanyahu has become famous for his uncanny ability to overcome opponents. He has even famously become known as “King Bibi” in Israel because of his longstanding ability to defeat rivals. More recently, however, his longstanding hold on Israeli politics has become even more tenuous.

As a suspect in a number of corruption scandals, Netanyahu’s popularity among Israelis has slowly begun to plummet, opening the possibility that his closest rival, Benny Gantz, could unseat Netanyahu and steer Israeli politics in a new, less hawkish direction. Israeli politics revolves around security, and in order to win the Prime Minister’s seat, whether on the right or left, the nominee needs to be viewed as a strong and decisive leader, one who can make the right decision when it comes to protecting the lives of Israeli’s from attacks or possible future threats. Thus, Gantz, as a decorated war hero and one of Israel’s most prestigious military commanders, was well placed to gain support from centrist and undecided voters in Israel. As the nation continues to face threats on its southern borders from Islamic Jihad, Hamas in Gaza and the increasing threat from the Iranian Shia land bridge that stretches from Iran through Iraq and Syria and into Hezbollah’s Lebanon; at the voting booth, security is of the topmost concern on Israelis’ minds.

Today, with the current COVID-19 crisis penetrating Israel and the world at large, Gantz has set aside his own political goals and has aligned with Netanyahu in the midst of a pandemic emergency. Following the second election stalemate in March of this year, Gantz chose to temporarily join Netanyahu in a unity government of a right-wing dominated coalition. Under a power-sharing agreement has yet to be entirely hammered out. The basis of the power-sharing agreement positions Netanyahu as Prime Minister for the first 18 months, with Gantz assuming power in the subsequent eighteen months. This led the Blue and White party, a block of mainly left and centrist parties that oppose Netanyahu, to immediately fall apart, in anger over Gantz going back on his word that he would not succumb to joining a future coalition headed by Netanyahu.

The alliance enabled the Likud party to regain control over Israeli politics, but the government has been given greater ability to confront the pandemic threat, enacting policies to prevent the spread of COVID-19 and mitigate the economic fallout that is an inevitable result of locking everything down and halting most economic activity. However, the inability of Netanyahu and Gantz to reach a complete agreement on a future unity government threatens the return of the ongoing stalemate that has characterized Israeli politics of late and foreshadows a future of a deadlocked Knesset. While lawmakers will certainly come together in order to successfully mitigate the impact of COVID-19, a new round of elections in the near future seems inevitable. This would actually benefit Netanyahu, given that during the next round of elections Gantz will be less popular and viewed with scepticism by voters.  Additionally, political parties will be less likely to support the Blue and White alliance after the most recent betrayal, making it harder for Gantz to possibly form a coalition with disgruntled rival right-wing parties. This will portray Netanyahu as the more ideal candidate in the eyes of undecided Israeli voters, most likely ensuring that the Likud will once again dominate the Knesset.

Therefore, it can be expected that Israel will continue the policies it has followed of late, which has been the target of international criticism but that the majority of the political elite view as central to the future security and stability of Israel. First and foremost, if Netanyahu stays in power, Israel will continue to pursue a policy of rapid settlement building and expansion in the Palestinian territories and Jerusalem. More so, with a fractured left opposition, the Israeli right-wing party will likely seek to pass legislation in the Knesset to annex key parts of the West Bank that Israel seeks to hold onto. This stance will make it harder, if not impossible, to reach a peace agreement with the Palestinians.  With the Blue and White party, there was room for negotiations, given that most left-wing and centrist parties envision or accept some form of a Palestinian state, living side by side with Israel in peace. However, most right-wing parties have no interest in seeing a future Palestinian state for a multitude of reasons, and they see no reasons to make concessions to the Palestinians in that the status quo currently benefits Israelis and that the Palestinians have no bargaining power.

Additionally, Israel can be expected to continue an aggressive security policy against threats beyond the borders under their complete control. The Gaza Strip can be expected to remain under a strict blockade, with Israel continuing a tit-for-tat policy with Hamas and Islamic Jihad. Israel will most likely continue to strike Iranian assets in Syria, possibly even escalating airstrikes against Hezbollah and high-tech weapons from Iran that are destined for Hezbollah in Syria and Lebanon.  Additionally, given that the Syrian National Army (SNA) is on the backfoot and Bashar al-Assad has regained control over most of Syria, Israel might even seek to escalate airstrikes targeting Iranian weapons depots in Syria and begin targeting Hezbollah positions on their southern border; as Israel views Hezbollah’s positions on its northern border in Syria with deep suspicion and are unlikely to accept their continued presence, following a status change in Syria that would no longer see the Syrian Arab Army (SAA) and aligned groups such as Hezbollah preoccupied with the ongoing insurgency.

In Summary, the political and electoral crises in Israel is far from over.  Once the threat of the COVID-19 pandemic has subsided, the electoral crisis will undoubtedly resurface. This is due to the inability of the right and the left in Israel to reach a middle ground in terms of power-sharing, and the Knesset will undoubtedly once again reach a complete deadlock, leading to calls for a new election. Gantz will once again seek to challenge Netanyahu for supremacy and take power away from the Likud in the Knesset, but the next time around, he will be at a disadvantage. Key coalition members such as Avigdor Lieberman of Yisrael Beiteinu will be unlikely to back Gantz after feeling betrayed by the most recent turn of events, preventing the Blue and White coalition from forming a large enough voting bloc to challenge Likud in a future election. This will further weaken the ability of the left to influence future coalitions. Israeli politics can be expected to experience a turbulent future, with many more political crises to come. Still, one thing remains clear: Israel will continue to support its current security policies, if not expand on them.

About the Author: Aaron Taylor is an Intelligence Analyst with expertise in the Levant, Sahel and Maghreb regions. His passion for examining how conflict resolution and grassroots solutions can be used to mitigate conflicts led him to pursue a  Master’s in Public Policy from Tel Aviv University with a focus on Conflict Resolution and regional expertise in the Middle East and Turkey as well as a Bachelor’s in Diplomacy and International Relations from Seton Hall University. His professional background includes helping governments and organizations better understand and prepare for geopolitical security risks and works as an intelligence analyst focusing on the Middle East and Americas region.