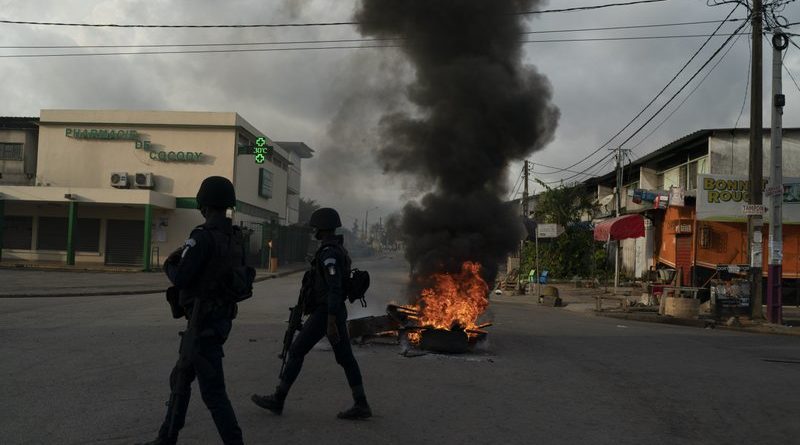 The 2020 October elections in Ivory Coast are surrounded by the memory of the 2010 elections, which escalated into a civil war after a contested election between the then prime minister Alassane Ouattara, and the incumbent president Laurent Gbagbo. Today, the fear of a possible conflict comes after president Ouattara decided to run for president for a third time, going against the Ivorian constitution limit of two terms per president.

Back in March president, Ouattara declared that he would retire after the end of his second term in October, giving the hope to have the country’s first peaceful transition of power. Ouattara nominated his then prime minister Amadou Gon Coulibaly as his party’s nominee, but Coulibaly passed away from a heart attack in early July. Ouattara took this opportunity to run for president again, raising criticism from his opponents. After Ouattara’s decision, the possibility of a serious escalation of violence that can spur into civil war seems to be more and more real. In the 2010 elections, the then-president Laurent Gbagbo refused to accept Alassane Outtara’s win, and violence between their supporters broke out. The civil war ended with Gbagbo arrest, taking 3,000 victims.

To fully understand the political and security situation in Ivory Coast today, it is necessary to learn more about the actors involved. On the 31st of October, four names were on the ballot. Alassane Ouattara, the current president who has been in power since 2010, and who is a member of the Rally of Houphouëtists for Democracy and Peace (RHDP) party. President Ouattara’s strongest opponent, Henri Konan Beidé, who was president of Ivory Coast between 1993 and 1999, and is the president of the Ivory Coast’s Democratic Party (PDCI). His agenda focused on economic development, improvement of education and healthcare systems, and the fight against corruption. Kouadio Konan Bertin, a former MP, was one of the two candidates on the ballot that hasn’t held the president role before, and the only candidate under 65 years old. He decided to run as an independent after leaving the PDCI. And Pascal Affi N’Guessan, who was Ivory Coast’s prime minister between 2000 and 2003, and he is the leader of the Ivorian Popular Front (FPI) party. The other 40 people submitted their candidacy, but they were all rejected by the Constitutional Court and the Electoral Commission – the institutions in charge of managing the elections. Among them were former president Laurent Gbagbo, who was ousted from power by Ouattara in the infamous 2010 elections, and the former rebel leader Guillaume Soro, who was also Ivory Coast’s prime minister between 2007 and 2012. Their candidacies were rejected because, even though they are both living in exile, they were indicted for financial crimes in two different cases in Ivory Coast.

Ouattara’s decision to run for president violates the Ivorian Constitution, which only allows a president to run two times. Ouattara says that his candidature is legal because the new law was approved in 2016 when he was already in power, so this year’s candidacy would be his first one under the current law. Ouattara’s decision to run again infuriated his opponents and the Ivorian people, who in early August started protesting around the country and calling for his withdrawal from the presidential race. Protestors clashed with security forces – more than 10 people were killed, and around 100 were injured  – which prompted Ouattara to prohibit demonstrations until September 30th.  However, on September 20th, Henri Konan Bédié and other exponents of the opposition asked citizens to take to the streets their dissent for Ouattara’s candidacy. They also called for the dismantling of the Constitutional Court, saying that by accepting Ouattara’s candidacy, the court was biased. Pascal Affi N’Guessan and Kouadio Konan Bertin did not join the call for demonstrations, giving the sense that they were somehow complicit in Outtara’s candidacy and possible reelection. Even though the September call to protest was for peaceful demonstrations, it still gave the impression that the opposition would not accept a possible Outtara’s victory, and it would be ready to contest reelection. International actors also weighted in Ouattara’s candidacy. During a meeting at the beginning of September, France’s President Emmanuel Macron suggested to Ouattara to postpone the elections and find a dialogue with his two opponents. But the Ivorian president refused, showing his determination to remain in power and his unwillingness to avoid conflict.

From October 16th things started to escalate. Pascal Affi N’Guessan’s house was set on fire after N’Gussan and Henri Konan Bédié called for an election boycott, and some clashes were reported between supporters of the president and supporters of the opposition, and they continued in the following days. On Monday 19th the Economic Community of West African States (ECOWAS) unsuccessfully called for Henri Konan Bédié and Pascal Affi N’Guessan to rethink the boycott and their call for demonstrations.

No matter the violence, the casualties, and the clear dissent for Ouattara’s decision to run for president for a third term, the elections went ahead anyway. President Ouattara won with 94.7% of the votes, and his opponents received between 1% and 2% of the votes. As it previously did during the 2010 elections, when it sided with Gbagbo by proclaiming him the winner, the Constitutional Court declared Ouattara the new president. Local advocacy organizations like PTI Advocacy Group, have reported that about 23% of polling stations were closed due to fear of violence and that voter intimidations occurred in 5% of the opened ones. In the months before the elections, activists Alexandre Aman and Pulchérie Gbalet were arrested because they expressed their dissent against Ouattara’s third term bid. On election day, protests and clashes between civilians and security forces continued.  Shortly after Ouattara was declared the winner on November 2nd, the opposition leaders rejected his win by calling for a transitional process and new fair elections. According to them, only 10% of the population went to the polls to cast their ballots, because the majority of the population answered their call for an election boycott. The newly elected president took immediate action against his opponents and promptly ordered the arrest of Henri Konan Bédié’s ally and secretary of the PDCI, Maurice Kakou Guikahué, as well as other PDCI members.

International actors like the African Union (AU), the United Nations (UN), and the European Union (EU) all accepted the official results of the Electoral Commission, however, it is important to point out that for now, international organizations have been fairly quiet on the matter. If the violence continues or worsens, the ECOWAS will have to step in like it did in 2010, and attempt to find a common ground and bring all the parties involved in a peaceful dialogue.

As we have seen, the election process for Ivory Coast has been once again very tumultuous with boycotts, violence, and arrests. Back in March, when Ouattara declared he was not going to run for president again, many hoped for a peaceful transition of power, but unfortunately, once again this was not the case. The elections were technically successful because people went to the polls and a winner was declared. However, the fact that the process to get here was filled with violence and hostility, and that the opposition has to reject the results, does not give the impression of a stable and peaceful future. President Ouattara’s third candidacy shows to the voters that they cannot trust their political leaders, and the fact that the Constitutional Court and the Election Commission accepted his bid and his victory, shows to the Ivorian people that they cannot completely trust the political system and its institutions. The uncertain situation in Ivory Coast comes after years of tensions in the region, where Islamist groups, contested elections, and coup d’états in neighboring countries are threatening peace and security in West Africa.

Duhem, Vincent, and in Abidjan. “Côte D’Ivoire: One Too Many Rounds for Alassane Ouattara?” The Africa Report.com, The Africa Report, 16 Sept. 2020, www.theafricareport.com/41855/cote-divoire-one-too-many-rounds-for-alassane-ouattara/?utm_source=twitter.com.

Richard, Florence, and in Abidjan. “Côte D’Ivoire: Where Is Civil Society Ahead of the Presidential Election?” The Africa Report.com, The Africa Report, 27 Oct. 2020, www.theafricareport.com/47664/cote-divoire-where-is-civil-society-ahead-of-the-presidential-election/?utm_source=twitter.com.