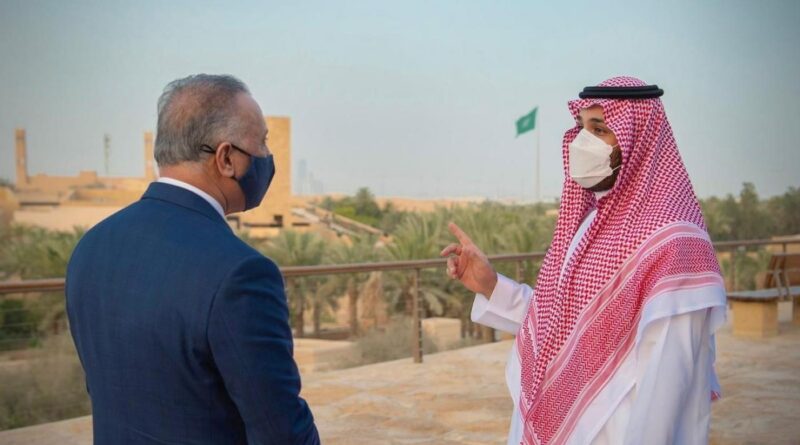 Iran and Saudi Arabia recently agreed to participate in a round table discussion aimed at improving their historically strained relations. In this sense, the two “Middle Eastern Cold War poles” had traditionally been theaters of long-lasting conflicts, and a permanent peace between them had seemed improbable for over a century (Saudi Arabia’s Crown Prince not long ago referred to Iran’s supreme leader as „the new Hitler of the Middle East“). Due to this context, an examination into the international factors behind Prince Mohammed bin Salman’s declaration of „build[ing] a good and positive relationship with Iran“ should be not just limited, but also vital.

Given this initial context, it is obvious that a century of tensions cannot be settled down just with few talks. However, it is also true that, for sure, this moment signed a fundamental turning point in the two actors’ political and economic relations. Here, of particular importance, is the geostrategic roles the US and China cover in the area. Indeed, on the one hand, the US appears to be concerned about Bin Salman’s radical shift in position, as it would imply losing authority not only over its historical ally, but also over the entire Middle East; whereas, on the other hand, China appears to be eager to launch its expansionist Belt Road Initiative, as the project to allow the passage of the maritime route in Saudi Arabia and railway infrastructure in Iran appears to be now more affordable.

In this view, the objective of this essay is primarily to provide an introductory understanding of the core factors that led Saudi Arabia to reapproach its historical adversary, Iran, and to analyze how and to what degree international influence contributed to such success. To do so, the “multiple Proxy War’s levels” concept will be used, and the article will be divided as follow: the first part will analyze the historical developments of the Saudi- Iranian conflict, the second will focus more on the international powers’ roles and on how the multi- layered Proxy War exacerbated the “Middle Eastern Cold War” dynamics, and the final third part will provide some considerations on the Chinese BRI construction as a root cause that brought to this initial tensions’ settlement.

Iran–Saudi relations have traditionally been tense, and, in literature, they have been usually ascribed to both the distinct faiths that the majority populations in both nations follow, as well as to the economic and geopolitical factors, since they are the region’s two primary oil competitors. Accordingly, we may divide the relationship between the two into three distinct eras: 1979-1988, 1988-2004, and 2004-present, with each characterized by whether it was a conflictual or reasonably stable time. In this sense, the recent Saudi decision has now probably paved the way for a new period of distension, but whether it lasts or not will be determined by the outcome of the next- months’ discussions.

The Saudi Iranian Friendship Pact, the first known treaty between the two, was established in 1929. Nonetheless, ties remained dormant until the 1960s, when the UK announced its withdrawal from the region and the two assumed the primary responsibility for the area’s peace and security. In this case, regional competition to secure the territory, as well as basic ideological, political, and military divisions, fueled an initial set of tensions that erupted with the theocratic Iranian Revolution led by Khomeini in 1979.

Here, the pre-existing difficulties became obvious (Iran started publicly questioning the Saudi regime’s character and religious legitimacy), and when Iraq attacked Iran, the Shia–Sunni conflict worsened even more. In particular, while the crisis raised concerns about regional stability, Saudi Arabia appeared to be more concerned about the revolutionary Iranian threat, and hence pushed other Persian Gulf Sunni Monarchs to financially assist its enemy.

Relations between the two started again to improve progressively only after the Iran–Iraq War, when Iran agreed to a cease-fire, and Saudi Arabia restarted discussions with its Shia neighbor. Following the restoration of confidence, when Iraq invaded Kuwait in 1990, both countries condemned the attack by backing UN sanctions, and, in 1997, the Organization of the Islamic Conference (OIC), in Iran, foreshadowed an historical shift in the Arab States‘ stance toward Shi’ites.

Nonetheless, hostilities worsened rapidly in 2004 when Yemeni rebels, known as Houthis, crossed into Saudi Arabia, whereby they killed two border guards and seized Saudi territory, including the strategically important Mount al-Doud. This triggered the largest Saudi military operation since the Iraqi invasion of Kuwait in 1990, and Yemen’s government, as well as the Arabs, accused Iran of arming the Houthis. From now on hostilities became more marked again, and they reached their climax in 2020, when the major general of the Iranian Islamic Revolutionary Guard Corps (IRGC), Qasem Soleimani was assassinated in a targeted American drone strike.

As already mentioned, from 1979 on, Iran and Saudi Arabia have provided varying degrees of support to opposing sides in nearby conflicts. Due to that, scholars have defined their discrepancies as a “Proxy- War”- a conflictual environment in which two actors instigate several wars, without perhaps being directly involved- which is waged on multiple levels over geopolitical, economic, and sectarian influence in pursuit of regional hegemony.

Nonetheless, one more theoretical step must here be taken. Indeed, when we look at the regional environment in a broader context, we can observe that the effects in the area are not limited to Iran and Saudi Arabia solely: the Middle East represents one of the major economic scenarios in the world, and several powerful international actors are involved too.

Specifically, in order to operationalize and describe this political environment’s complexity, a new theoretical concept should be used: the ‘Two/Multi-level Proxy Wars’. According to this definition, Iran and Saudi Arabia can be seen as both subjects and targets of proxy wars, since they influence the behavior of other Middle Eastern, African, and South Asian actors on the one hand (as in Yemen and the Caucasus), and they have been encouraged to oppose each other by foreign forces on the other.

In this sense, the main driving forces in this supra- regional level’s phenomena can be detected mainly in the US and Chinese influence. In fact, the US historical backing for Saudi Arabia, as well as the Chinese backing for Iran, have contributed to wide disparities and tensions, and they fostered an environment in which it is no more possible to talk about a normal conflictual relation among sovereign countries, but of a further, unexplored, level of proxy wars.

Here, fundamental is to notice that Chinese “soft power” has always been primarily political and economic in character, and even when it has involved arms sales or technology transfer, it has never been as substantial as the Western “hard” support to Saudi Arabia. Specifically, the US established several military bases and sold weapons to it for years, and it ratified agreements on several topics at different levels of governance (from mutual security and economic matters to students’ exchange agreements). Nonetheless, their disparities in approach should not lead to a misinterpretation: American and Chinese actions fostered a conflictual scenario, and in doing so, they both attempted to provide a more fertile environment where their own economic interests could flourish unrestrainedly.

Today, the pressuring forces’ equilibrium seems to have slightly changed. Indeed, China’s economic and political involvement is no longer limited to Iran alone, but to the entire region, whilst the US has stayed tied to Saudi Arabia exclusively, preventing any further interaction with others. Specifically, China has used majorly economic tools as both oil supply deals and a recently published economic five-point strategy (announced by China’s Foreign Minister Wang Yi during its Middle Eastern six- countries tour) to both shift the geopolitical balance in the region in its favor, and to promote the construction of the Belt Road Initiative (BRI) in the Middle East.

Now, in this regard, two main arguments should be highlighted. The first entails mainly the Middle East as a pivotal geostrategic knot for the construction of the Chinese Belt Road Initiative (BRI); while the second consists of the intrinsic value of the Chinese “Soft Power” approach as the only valuable alternative to the western “harder” approach in the region.

Regarding the former, the BRI, if completed, will pass by land and by sea into both the two Middle Eastern “Cold War poles”, and the international powers’ equilibrium (regionally and globally) can potentially be reshaped. Indeed, the manner in which the negotiations between Iran and Saudi Arabia will be conducted may represent both an insurmountable hurdle and an unrepeatable opportunity for China’s expansionist agenda. In the former case, a further conflict can turn the BRI impossible to achieve (China might be forced to support one country exclusively, abandoning the expansionist project in the other state), in the latter, it can result in the most ambitious program realized in the Middle East so far, and in the first milestone toward a peaceful settlement among Iran and Saudi Arabia.

Otherwise, regarding the approaches’ shifting, contrary to Grumet’s assertion (“the U.S. will be unable to focus its full attention on its pivot to Asia and will be required to continue to maintain a policy of long-term engagement in the Middle East [due to the Saudi Arabia- Iran tensions]”), and despite the United States‘ designation as the region’s sole security guarantor for nearly a century, current reconciliation efforts may foreshadow not only a turning point in regional relations, but also a shift in the best geopolitical strategy to follow, by moving from a „hard“ to a „softer“ approach.

Due to that, it appears that the final fundamental reasoning of this study is based on two major theoretical notions: the fact that Iran-Saudi Arabia peace talks did not come out of nowhere, but they might have been the more or less conscious spill- over effect of the Chinese Belt Road Initiative policy’s construction, and that the relations’ complexity among Iran and Saudi Arabia derives mostly from a multi- layered Proxy War, originated back in 1979. By merging these two main frameworks we may see that a new unexplored context emerges: China’s soft- balancing approach to the US, and to western influence as well, is effective, and it may represent the winning card for becoming the next main foreign actor in the Middle Eastern region.

Indeed, as Burton argues: “In explaining the shift [that Crown Prince Mohammed bin Salman had toward Iran], analysts have focused on changes taking place in the United States [solely; without considering] the increasing multipolarity of the Middle East”. To that, he also adds that: “China has sufficient base and motivations to have such conversations, [since they] are among the most important countries for Chinese commercial activity in the Middle East; and since it has the means to engage with Riyadh and Tehran on a substantive [and egalitarian] basis”.

In conclusion, as previously stated, the already existing bilateral cooperation over fuel between China and Middle Eastern countries seems to be the foundation for the larger project of the Near- Eastern Belt Road Initiative, and thus it is no longer possible to analyze the alliance’s regime in the area without perhaps taking into account the growing Chinese influence. Specifically, China helped to change the regional political landscape by adopting a “softer counterbalance” strategy, and as a result, such a shift in foreigner influences‘ approaches resulted in being one of the most prominent reasons why Saudi Arabia chose to strengthen its relationship with Iran, a decision that would otherwise be inexplicable.

Mapping the Belt and Road Initiative: This is where we stand, MERICS (MERcators Interest for China Studies), 2018 (URL: https://merics.org/en/tracker/mapping-belt-and-road-initiative-where-we-stand )

Why does Saudi Arabia demand relations with Iran? The Independent, 2021 (URL: https://www.theindependentbd.com/post/262327 )