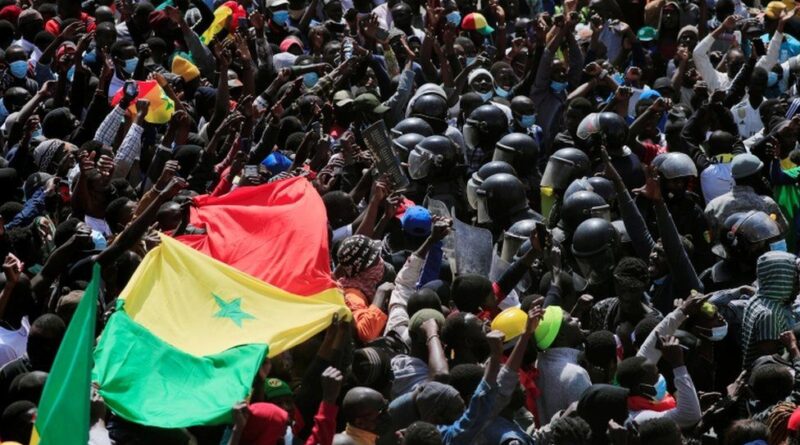 Senegal’s reputation of stable democracy in West Africa seems to be compromised after protests broke out in the capital Dakar in March 2021. The new wave of protests comes after a series of events and government decisions that have exasperated the population, especially the urban youth. The West African country hasn’t experienced this level of protest and dissatisfaction with the government since the presidential election campaign in 2012, and it is usually unfamiliar with clashes between citizens and the police.  In the past year, we have seen protests breaking out in many countries across Africa, mainly led by the youth, who are trying to make their voice heard and achieve positive change.

The protests started on 3rd March, when the opposition leader Ousmane Sonko was on his way to court to appear in front of a judge after he was accused of raping Adji Sarr, a beauty salon empoyee back in February. Sonko’s supporters gathered on the streets of Dakar to show their loyalty. However, Sonko was arrested for having an unauthorized demonstration, before he could appear in court. His arrest only sparked anger among his supporters, who continued to protest for the following days. Sonko was released on 8th March, when he addressed the nation and president Macky Sall, stating that he and his supporters will continue to fight for change. During the days of protests, a number of demonstrators were arrested, 235 people were injured according to the Red Cross, some TV stations were suspended for three days because they reported the demonstrations, and the government limited access to social media, a move that is shocking for a country that has a track record of respecting freedom of expression.

But who is Ousmane Soko? Before he turned to politics, Sonko was a tax collector and he became involved in politics in 2014, when he founded his own political party Pastef-Les Patriotes. In 2017 he was elected to parliament, and in 2019 he ran for presidency gaining 15% of the votes, and placing third in the presidential race. His supporters are predominantly young people living in urban areas, and who support Sonko’s agenda of pan africanism and economic independence from France. After the rape accusation in February, many believe, including Sonko, that he was targeted by the current president Macky Sall in order to prevent him from running for president a second time in 2024. This allegation against the president comes after previous questionable decisions he took in the past against some of his other opponents. In 2013, Karim Wade, the son of former president Abdoulaye Wade, was convicted of corruption. He served three years in prison, and went to exile in Qatar one he was released. He was considered a possible candidate for the 2019 presidential elections. In 2017, the mayor of Dakar, Khalifa Sall, was charged with corruption, preventing him from running for president in 2019. He was pardoned in 2019, only after Macky Sall was elected president. The recent court case against Sonko, seems to be similar to Wade and Khalifa’s cases where the current president found a way to prevent popular figures from running against him in the elections, and take his place.

Senegal is joining other countries in West Africa that experienced this type of behavior from a sitting president. In the past year we witnessed the president of Guinea and Côte d’Ivoire changing the constitution to extend the term limit for the presidency in order to stay in power. Sonko accused Sall of wanting to do the same, and extend the presidency’s term limit from two to three terms. Between 2012 and 2016, 42 members of parliament who are part of the Parti Democratique Senegalais (PDS), the main opposition party, have been arrested. The arrest of Karim Wade and Khalifa Sall, and now of Ousmane Sonko, have been worrying not only the Senegalese people, but also regional and continental organizations like the African Union (AU) and the Economic Community of West African States (ECOWAS). However, the AU and the ECOWAS, have been weary of taking action not only in Senegal, but also in other countries. More than releasing statements that condemned the actions of presidents, nothing else has really been done. This has been a frequent criticism of the two international organizations, which seem to be incapable of keeping head of states accountable when it comes to purging opponents and changing constitutions to maintain power.

The recent protests not only are in support of Sonko, but they also express the frustration of the population, especially the youth, towards Sall and his politics. Senegal experienced protests against the COVID-19 restrictions last year in the height of the pandemic, when Sall imposed a night curfew in order to limit the spread of coronavirus. These measures particularly impacted those working in the informal sector, and had serious repercussions on the economy, leaving people, especially young people, unemployed. For the urban youth, it is difficult to find work also with a university degree. Young people have also been protesting against a government that, as we have seen above, is becoming more and more autocratic. In recent years, young people across Africa have started to mobilize and challenge their governments with demonstrations, demanding more accountability from politicians, better economic policies for the youth, and a stop to the violation of human rights. In Senegal, the movement Y’en a Marre (Fed up) was founded in 2011 to show the young Senegalese’s discontent for president Abdoulaye Wade, and now is showing support for the protests against Sall’s agenda.

The instability that Senegal has experienced in the last few months, has the risk of deteriorating even more. If Macky Sall does decide to make changes to the constitution and run for a third term, violence may resume, and get out of hand. Additionally, if Ousamne Sonko is convicted, he risks to serve up to 10 years in prison, and he would not be eligible to run for elections in 2024. This may also create further exasperation among his supporters, and escalate into violence. However, it is also important to take into account that Adji Sarr was brave enough to come forward and denounce her perpetrator. Senegal criminalized rape in Janurary 2020, and not taking seriously a victim in such a high profile case, can have severe repercussions on future rape cases. A thorough and transparent investigation is essential. However, this can be challenging, since the Senegalese judiciary system is closely connected to the presidency. The Supreme Court judges are appointed by the president, as well as five of the seven representatives of the Constitutional Council. This gives the president the possibility to affect the judicial system and blur its  transparency by influencing the decisions of the courts. There should be a more clear division between the presidency and the judiciary system. A reform of the judiciary system is necessary to ensure transparency and avoid any future allegation towards presidents of convicting political opponents to remain in power. In the case of Sonko, the risk is that if he is convicted, he will challenge the  court’s decision, and his supporters will organize new protests.

Addressing Sall’s actions to disqualify his opponents for the next presidential elections is imperative. As previously mentioned, the ECOWAS and the AU have not done enough in stopping other West African leaders to make changes to the constitution. ECOWAS and AU should intervene, and either use diplomacy to persuade Sall to end his second and last term as stated in the constitution, or impose sanctions on Senegal in order to send a clear message to Sall. A democratic and peaceful transition of power is the only option to make sure Senegal’s reputation as one of the most democratic states in the region remains.

The protests Senegal experienced in March sparked from Sonko’s arrest, are bringing up to the surface some deep rooted insatisfactions with the government, and it looks like Sall will have challenging times ahead. First, if Sall wants to avoid the risk of more protests, make the rest of his presidency easier, and avoid further violence, he should work on new policies that address the problems faced by the youth, and start a dialogue with civil society organizations either run or that work with the youth. Young people make the majority of the population in Senegal, and not having them on his side can compromise  his position. Second, the suspension of two TV stations and some social media platforms, raises the concern that freedom of expression is not being respected, preventing  the proliferation of facts and information, and diminishing Senegal’s reputation of democratic country. Third, Sonko’s charge is complicated because his conviction or acquittal will have a significant impact on different fronts: Adji Sarr’s life and reputation, the possibility of new unrest, and either negatively or positively influence public’s opinion on the judiciary system’s transparency and fairness. We will need to wait for Sonko’s trial later this year to find out how much this case will change the president’s Sall next years in office.

Kelly , C. L. (2021, May 25). Justice and Rule of Law Key to African Security. Retrieved from https://africacenter.org/spotlight/justice-and-rule-of-law-key-to-african-security/

Mampilly, Z. (2020, November 20). Senegal’s rappers continue to ‚cry from the heart‘ for a more just society. Retrieved from https://theconversation.com/senegals-rappers-continue-to-cry-from-the-heart-for-a-more-just-society-91263