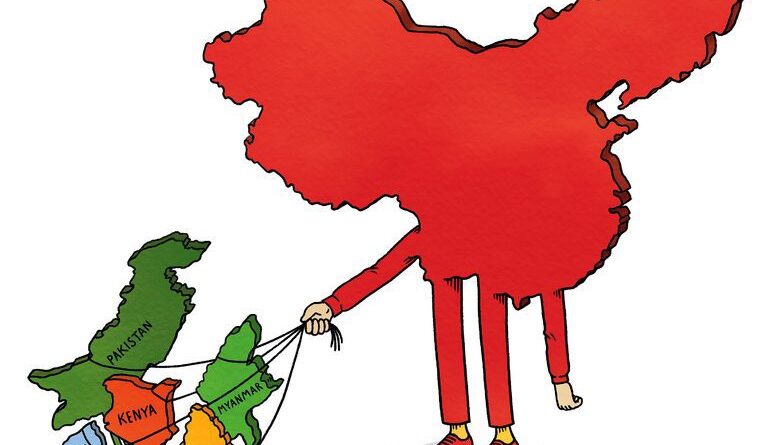 Debt trap diplomacy is a kind of policy or economic tool in which one country helps the other country in building a strategic infrastructure project by providing a huge amount of loan, sometimes more than the estimated cost of the project. Only this time, the deal starts with the long term high-value loans for infrastructural development of the smaller country and economic aid collateralized by the geopolitically strategic assets. (Gopaldas, n.d.) This kind of loan has been frequently provided by economically stronger nations to the developing or underdeveloped nations, often struggling to get financial assistance from other countries. These are the characteristic features of loans provided by China and have grabbed sharp criticism over its dubious terms and conditions. The amount of loans provided by China is enormous and even helps the country in finishing its project but in turn, also makes it dependent on it.  Another major characteristic of this economic assistance is that the countries on the receiving end have either failed to obtain loans from international financial institutions due to poor repayment records or already have an unpaid loan. As a result, a country on the receiving end of this enormous loan becomes more and more exposed and dependent on China for its development, knowingly or unknowingly more firmly under its grasp. In other words, the country gets engulfed in the debt trap – vulnerable to China’s control. And subsequently, when a country fails to repay the loan, China cedes some of their assets (for example strategic infrastructure projects, energy resources, land etc.) to get its payment and decrease the burden of the debtor country. This is also known as debt- for- equity- swap.

Just Debt or some Trap with it?

Researchers and scholars have expressed their concern over the huge amount provided by China to developing countries. However, the scepticism among scholars revolves around some valid points which question the debt provided by China. First, less paperwork involved. This raises doubt over the terms and conditions of the deal signed. Second, the deal signed is often kept hidden from the public domain and no documents are released by any of the nations which make the deal, making it more opaque and out of the reach of the public domain.      Third     , the authoritarian style government of China raises suspicion in the minds of people behind this debt-for-equity- swaps, questioning the viability of the deal. Fourth     , China does not take into account side factors that also determine a country’s eligibility to get loans (Western nations take into account such factors to keep a check on misuse of funds provided) like human rights violation, environmental degradation, ethnic cleansing, authoritarian leadership etc. It has invested huge amounts of money in projects that have been proven not feasible or unproductive and then ultimately taken its control due to non – pay ability by the country in debt. It reflects how      China prefers to keep the deal professional like a business affair and eliminates the morality factor from it, which means China will want back its money at any cost.

However, there are some other factors that need to be kept in mind before declaring it as a trap- First, countries sometimes invite China to invest in their projects. Second, the Leadership of the nation matters too. If the leadership is authoritarian, it will seek more and more loans from China to improve its infrastructure and fulfil promises to its citizens and also accomplish their royal needs. Third, it is the duty of the leader to analyse the feasibility of the project that needs to be developed and not the country providing the loan. Unsound project selection and poor implementation can result in the failure of the project and the wastage of funds. Fourth, the Leader needs to understand the deal of the loan and project before signing it blindly to avoid misuse of any strategic project or fund.

What has China offered to South Asia as a debt – diplomacy?

Pakistan is the neighbourhood adobe for China’s ambitious BRI project and its flagship projects like CPEC, Karakoram Highway or Main Line- I railway project. Pakistan’s geographical location has proved to be very beneficial for China as it will help in connecting China to West Asia and have access to its rich oil resources through Gwadar port. Although this project has helped Pakistan in turning its perennial electricity shortfall into a now-massive capacity surplus. (Business Standard, 2021) However, Pakistan’s debt liabilities are increasing under the CPEC project and will surpass $31 billion in the future as said by Asia times. (Shakil, 2021) An interesting fact is that the debt is owed despite many of the plants built actually not engaged in producing power due to the overcapacity issue and failure of Pakistan’s power authority to develop a national grid and meet ground level demands. (The Times Group, 2017) These contacts were signed when Pakistan was facing acute power shortages and accepted these conditionalities. (Shakil, 2021)

China has already taken over the control of the operations of the geopolitically strategic Gwadar port on lease for a period of 40 years. Moreover, CPEC construction has proved to be less beneficial to Pakistan than promised in the beginning. It was ensured that the project will bring employment and revenue generation for the country. Instead, the project has been built by Chinese labour, materials and equipment. The number of job generation for Pakistan is also not satisfactory. (Kannan, 2020) The circular debt obligations are exerting pressure on Pakistan’s economy. During the first half of the 2020-21 fiscal year, Pakistan paid over $7 billion in external debt servicing, a figure that equates to nearly half of the foreign exchange reserves held at the State Bank of Pakistan – Asia Times reports.

Sri Lanka’s Hambantota port is often cited as a perfect example of China’s debt-trap diplomacy. The Hambantota project started in 2008 under the presidency of Mahinda Rajapaksa and 85% cost of the construction was backed up by the EXIM Bank of China. (Gangte, 2020) Although Hambantota was not economically viable due to its remote location and lack of industrial development around the port, China invested such a huge amount in the project. The port construction came to halt in 2010 due to political instability. Sri Lanka’s debt was rising and the port constructed didn’t make any profit yet. (Jones & Hameiri, 2020) As Chatham House’s report states- Sri Lanka’s finance ministry reportedly estimated the port’s total losses at $230 million for 2011–16. Sri Lanka failed to repay the EXIM bank loan and that led to the ceding of ownership of the port to China Merchant Port Holdings Limited (CM Port) and leased Hambantota port for 99 years.

However, contrary to what is often claimed by the researchers, this is not a debt for equity swap deal or cancelling the deal in exchange for the control of the port. The Sri Lankan government is still obliged to pay off the five loans obtained by the EXIM bank in due course. (Moramudali, 2020). However, 70% of the stake of the port was leased to China Merchants Port Holdings Company Limited (CM Port) for 99 years for $1.12 billion. And this money wasn’t used to pay off the debt for the port, instead of to strengthen the country’s foreign reserves and short-term debt repayments (Moramudali, 2020). However, the long duration of the lease questions the intentions of China especially when other options could have been pursued instead.

Nepal’s position in South Asia is very strategic and significant, for China as well as India. This small country in the lap of the Himalayas has acted as a buffer between India and China. But rising anti-Indian sentiments in the country and increasing proximity between China and Nepal has gained a lot of attention these days. In June 2018, Nepal’s PM Oli signed an MoU on the cross-border railway line linking the Tibetan border town of Kerung with the Nepali capital, Kathmandu, and tourist towns of Pokhara and Lumbini (Buddha’s birthplace). (Adhikari, 2018) China has already constructed a railway line from mainland China to Shigatse via Lhasa and plans to extend it to Kerung (China)/Rasuwagadhi (Nepal) border point at Nepal-China. (Jha, 2019) The main issue is that the project will be designed and built by China-based companies and Nepal will gain nothing during the project completion process, not even the desired rate of employment generation. In addition, there’s a debate in Kathmandu itself on the financial feasibility of the project. (Adhikari, 2018)

Risks for South Asia: Price of this “benevolent” debt

Chinese debt policy has been defended many times, saying that it was not China who proposed the project or China didn’t take ownership of the resources, just took it for lease for some years. But if we look closely there are many other implications of these collateralized loans for the hefty amount of money. Some of these implications are:

What can be done?

China is trying to present an alternative to the Western hegemony in each and every area by producing more viable and economically feasible options. The same pattern is visible in the Chinese lending system which is popular amongst developing or underdeveloped countries.  Countries that have been turned down by the Bretton Woods financial institutions (due to a number of factors like human rights violations, constitutional crises or authoritarian government) are now being backed by Chinese financial institutions. (Sundquist, 2020) This needs to be changed and leaders of the developing countries need to be more visionary rather than being short-sighted and giving ownership of the country’s resources to a foreign nation. They      need to understand the terms and conditions of this “unconditional loan” being offered to them instead of blindly accepting it for their own benefits and luxury or recklessly using the allocated funds for personal recreational purposes. The economic feasibility and usefulness of the proposed project must be determined strictly and must be understood by the host government rather than getting mesmerised by the mere size of investment and project. Rather than bluntly rejecting the aid and loan proposals by the developing countries, financial institutions need to listen to the requirements and urgency of the country demanding it.

The West, especially the US, needs to work on this increasing footprint of China in the developing nations by adopting the strategy of Aid. Foreign Aid from democratic powers can be helpful in addressing multiple issue at once: countering terrorism, rebuilding fractured economies and it will also help to build goodwill amongst countries engaged with China.      And not only the US, but other developed countries also need to come forward and collaborate with developing countries over strategic projects instead of complaining about China’s “debt trap” and propaganda politics.