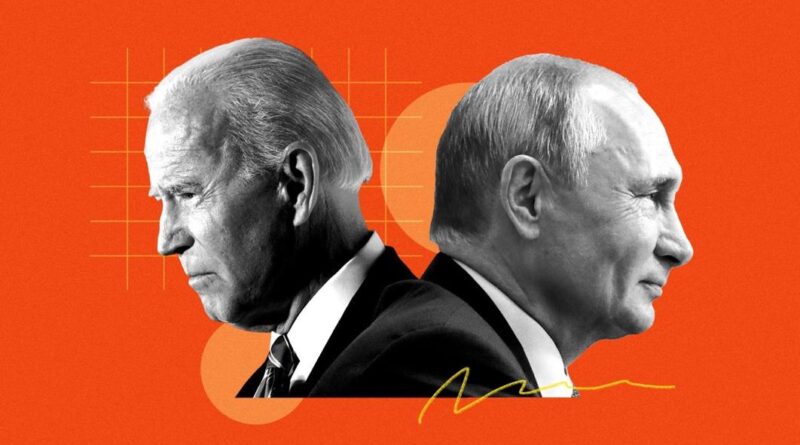 Few meetings offer the chance for President Biden to reaffirm and restructure US foreign relations than the highly anticipated Geneva summit.  As his first international trip as president, Biden packed a full schedule, attending both the G7 and NATO summits which left the standout bilateral meeting with Vladimir Putin to round out the eight-day trip. At a time when tensions between both nations remain high, last month’s talks have illustrated the need for careful coordination. Was Geneva’s historic neutrality able to serve as a calm backdrop for a constructive meeting between two major world leaders, or did the world witness little more than a self-serving spectacle?

While many questions surround this bilateral meeting and its purpose and potential, one thing remains clear- the world shall not expect a warm welcome as was the case under the previous Trump administration. If anything, this initial meeting will offer the chance to illustrate exactly where both nations currently stand and where they both intend to go, as partners or adversaries.

To understand the sensitivity of today’s meeting, we must keep yesterday at the forefront of our minds. Based on evidence gathered in a joint investigation conducted by the CIA, FBI and NSA, Russian interference had undoubtably occurred during the 2016 US presidential elections (US Senate Intelligence Report 2019). According to that report, Russian intelligence had begun gathering information regarding US elections back in 2014 and continued doing so through 2017 (ibid.). The report concludes that multiple methods were utilized to bring Russia’s primary interest to fruition- the electoral victory of Donald J. Trump.

In order to advance Russian ambitions beyond their own borders, social media became the main gateway to spread disinformation. With the intention to mislead the American people, the notion of election insecurity was spread. According to Facebook, between January 2015 and August 2017, over 80,000 publications traced back to 470 accounts were connected to the Russian Internet Research Agency company (Marineau 2020).  Furthermore, Twitter acknowledged that 50,258 accounts were linked to Russian bots which spread false information during the 2016 election cycle (Ibid.). These accounts are responsible for more than 3.8 million tweets, or about 19% of the total tweets concerning the elections (Ibid.). Considering the magnitude of their efforts, it seems that their methods have been proven effective, as more and more people fall under the belief that not only fellow citizens, but the government, are sources of skepticism rather than security (see graphs below). 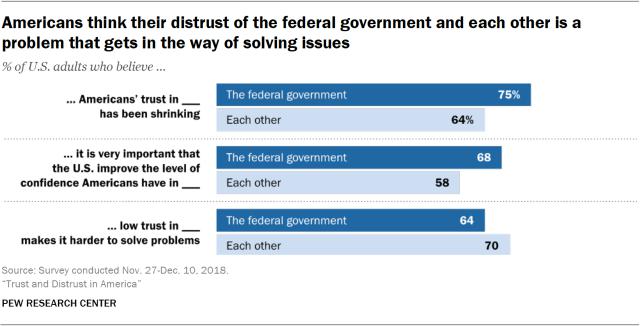 Unfortunately, that sense of mistrust has manifested in other facets of American society. As Russian interests catered around the aim of scraping away the sanctity of American elections, their fortitude seems to have paid off. According to a 2018 survey conducted by the prominent Pew Research Center, a staggering 47% of Americans have little or no confidence in others to accept election results regardless of outcome and 52% say they have little or no confidence that others respect the rights of those who are different from them (Pew Research Center 2018).  This data begs the question- is America losing its global standing on concepts such as diversity and tolerance? 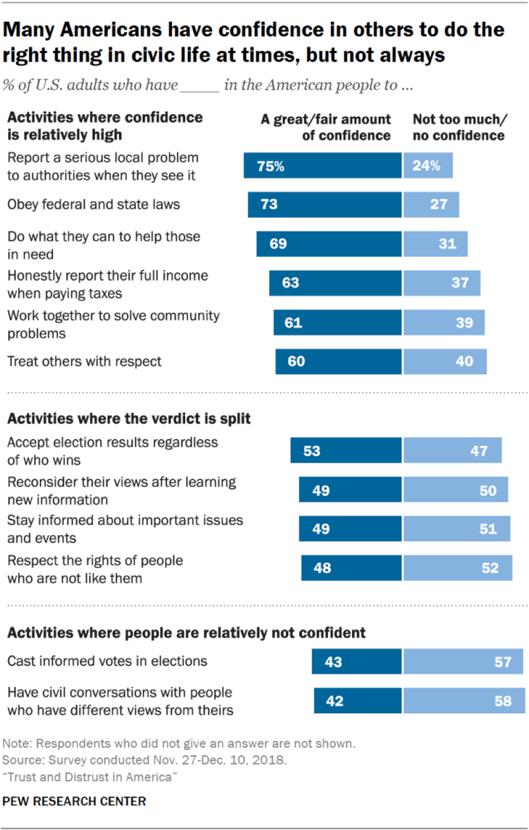 Coming into the recent 2020 elections and Russian interests seem to have remained loyal to Trump and his reelection campaign. Seeing as previous media efforts paid off, it  comes as little surprise that similar methods were recycled for the following election cycle.  As of August 2020, Facebook identified and dismantled three botnets spreading disinformation: two coming from Russia and one from Pakistan (Marineau 2020).

This incessant ploy to sway American perceptions and undermine the confidence in U.S. democratic institutions and voting processes requires proper scrutiny, something that the Trump administration was not willing to take seriously, which only further played in the hands of those who lost trust in the system along the way. While tweets and posts may not seem all too threatening, their vast reach have a way of finding those most vulnerable to disinformation campaigns.

As America’s democratic foundation continued to take hit after hit, Trump’s behavior during the joint press conference with Putin after the Helsinki Summit of 2018, sounded the alarm bells, as he sided with Putin’s denial of Russian involvement in US elections over his own national intelligence agencies which had just verified the opposite. After such a disgraceful political maneuver, failing to denounce the Kremlin, many considered Trump to be nothing more than America’s traitor and Putin’s puppet.

Considering the overall increased volatility and uncertainty during Trump’s term in office, this meeting was essential in revamping appropriate relations between the US and Russia. According to the White House, President Biden viewed the meeting as a means to work toward a more “stable and predictable” relationship and to avoid further escalation (VOA 2021). Although the need to recalibrate this historically combative connection could not be greater, this summit was not designed to make grandiose pledges or promises. It did however, in the words of President Biden, “ provide basic rules of the road” where both countries can abide by (Biden 2021). In that sense, his next statement makes sense- “he did what he came to do” (Ibid.).

During this meeting, which lasted roughly three hours, several themes were briefly discussed, with the most vital being, cyber security, nuclear arms and human rights. According to the White House, Biden gave Putin a list of sixteen sectors considered critical infrastructure and therefore off limits to any cybersecurity attacks. For example, energy facilities, critical manufacturing, transportation systems and agriculture and water services made the list. When pressed during Biden’s post summit press conference, Biden reiterated that Putin has agreed to the principle, but that actions must follow, stating that “responsible countries need to take action against criminals who conduct ransomware activities on their territory” (Biden 2021). Furthermore, it has been revealed that separate expert task forces will be made in order to develop deeper understanding and objectives regarding cyber security, highlighting both nations’ willingness to cooperate further (Liptak 2021). Beyond this list, few details were divulged on this matter.

Moving beyond the thin foundation of the cyber discussion, talks surrounding nuclear arms followed. The notion of reaching strategic stability where both nations agree to get back to regular, senior level talks is the first step in restoring security (Bender 2021). Both the US and Russia consider this aim within their own set of interests, as can be made evident by their mutual agreement to extend the New Strategic Arms Reduction Treaty (New START) within days of Biden taking office (Ibid.). Anything more significant was not only unexpected, but some have argued too risky for any initial meeting to attempt.

Finally, on the account of human rights, Biden was adamant that America would continue to raise the alarm against persistent violations of fundamental rights taking place within Russian territory. Naturally, Alexei Navalny’s name came up, as the prominent opposition figure and leader of the Anti-Corruption foundation, has been in Russian custody since January 17th  of this year, on charges of disobeying his terms of parole, a charge he claims is Russia’s way to intimidate the public from speaking out against the Kremlin (DW 2021). In closing remarks on the topic, Biden reassured Putin that the defense of America’s democratic values and protection of basic human rights is a part of American DNA, and these issues will always be on the table (Biden 2021). All in all, Biden came to remind the world that America is back and ready to meet both with allies and adversaries on the international arena.

The last meeting of both Heads of State took place in Helsinki during the 2018 G20 summit, and as previously mentioned, transpired under a much warmer reception. From Putin’s perspective, a meeting with any US president is considered critical, not only from the point of view of domestic affairs, but also as a means to reassert his position as a major player on the international stage. From the onset, things looked positive. As a leader, Putin has become quite infamous for his tardiness, arrived on time, as he was scheduled to arrive just before Biden. Perhaps this promptness indicates Putin’s interest in kickstarting relations on solid grounds.

As previously noted, the main topics for the leaders were related to cybersecurity, arms control and human rights. When the talk circled around the recent ransomware attacks, for which some have been linked back to Russian hackers, such as the REvil cybercrime gang, who recently carried out a global extortion scheme seeking seventy million dollars from Kaseya, a US-based company and their clients worldwide (Satter 2021). When pushed on these issues and Biden’s expectation that countries should be held responsible for activities which take place in their respective territories, Putin stated that most attacks in fact take place in America (Radchenko 2021).

One area where there seems to have been more harmonious desire to cooperate is in the area of nuclear arms control, something which the global community can undoubtably appreciate. As details are not quite defined, what we do know is both parties are willing to dedicate time and resources to this matter and for now, that is better than nothing.

Lastly, when the topic of human rights emerged, Putin was quick to point to America’s own domestic disturbances, most notably the January 6th Capital insurrection, stating that Russians will “figure out what to do with their own revolutionaries” (Kortunov 2021). The notion that Americans will not meddle into the internal affairs of Russia seems to have been a sticking point for Putin to reinstate his image as a powerful world leader. His trademark “whataboutism” has proven loyal, as its operation continues to pull Putin out of some particular hard-hitting questions. All in all, Putin may very well be satisfied with his performance, as he referred to his meeting with Biden as constructive and may have re-elevated his international standing as a credible leader.

As many anticipated, this bilateral meeting seems to have been designed to clear a low bar, keeping expectations to a minimum. Perhaps that is the best first step to take when tensions have not been this high since the end of the Cold War. After EU and NATO members met days earlier, it is with great global eagerness that this meeting restructures a more balanced, predictable EAST-WEST relationship, one built on a fundamental and mutual interest to keep the channels of communication open. Certainly, it is too early to make any confident conclusions regarding the success or failure of this first meeting, but for the critics, who consider these meetings as nothing more than self-serving publicity stunts- as the old adage goes- keep your friends close and your enemies closer.

Kortunov, A. (2021). What is the Main Outcome of the Putin-Biden Meeting? To whom did it turn out to be more profitable? And In General, Why Was It Needed? Answering the Main Questions about the Geneva Summit. Meduza. (meduza.io/feature/2021/06/17/kakovglavnyy-itog-vstrechi-putina-i-baydena-komu-ona-byla-vygodnee-i-voobsche-zachem-byla-nuzhna, 17.7.2021)

Marineau, S. (2021). Fact Check US: What Is the Impact of Russian Interference in the US Presidential Election?. The Conversation. (theconversation.com/fact-check-us-what-is-the-impact-of-russian-interference-in-the-us-presidential-election-146711, 1.6.2021)

Radchenko, S. (2021). What is the Main Outcome of the Putin-Biden Meeting? To whom did it turn out to be more profitable? And In General, Why Was It Needed? Answering the Main Questions about the Geneva Summit. Meduza. (meduza.io/feature/2021/06/17/kakov-glavnyy-itog-vstrechi-putina-i-baydena-komu-ona-byla-vygodnee-i-voobsche-zachem-byla-nuzhna , 17.6. 2021)