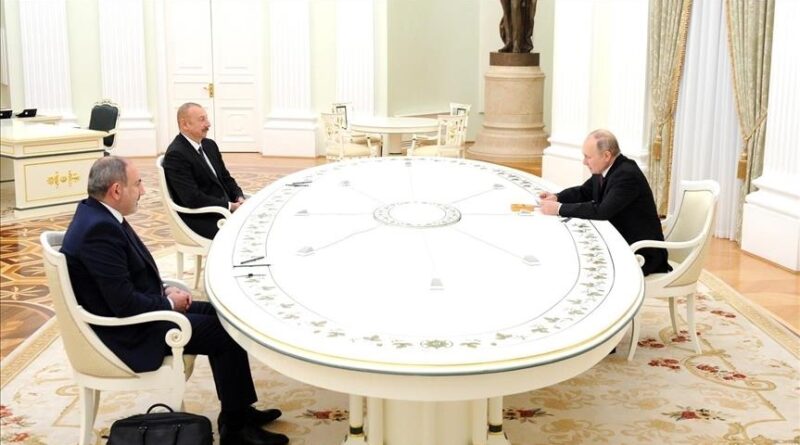 On November 26th, the Russian city of Sochi has hosted a trilateral meeting with the Russian President, Vladimir Putin, the Armenian Prime Minister, Nikol Pashinyan, and the Azerbaijani President, Ilham Aliyev. In line with the agreement signed on November 2020 after the Second Karabakh War, the Kremlin has seemingly found a solid and potentially long-standing solution for the thorny question of borders demarcation along the de jure Armenia-Azerbaijan border- Yet the serious humanitarian situation within the Armenian-controlled region of Nagorno-Karabakh, as well as the reopening of the infrastructural means of communication through the so-called “Zangezur corridor”, remain open and much-debated.

With the scope of stabilizing the whole South Caucasus around these three major and most pressing issues, the Sochi summit took place after a series of small-scale eruptions of violence from within Nagorno-Karabakh (Kucera 2021). Military clashes that happened during the summertime and early autumn had undoubtedly hit the nerves of Karabakh-Armenian and Azerbaijani military personnel. Against the truce proclaimed in November 2020 (Caucasian Knot 2021; Radio free Europe 2021; Panarmenian 2021), the Sochi summit gathered the three regional leaders with the attempt of paving the way to solid perspectives for the region in the long run. Many commentators and pundits have questions the reasons for which Moscow had felt the urgent need to rush the organization of the summit. Others have instead raised several questions regarding the Russian commitment to cool down the growing tensions of the last months.

There are two prominent reasons explaining the diplomatic diligence by which the Russian Federation has so far intervened after the 2020 dispute over the Nagorno-Karabakh. First, last December 15th, the Armenia Prime Minister and the Azerbaijani president are expected to meet with the European Council president Charles Michel, on the sidelines of the European Eastern Partnership works (Daily Sabah 2021). This appointment could be the first confrontation official occasion between the two Caucasian leaders since January to meet, after the last time in Moscow to further discuss the details of the 9th November agreement. The meeting, organized after the hostility recrudescence of the first half of November, has been interpreted by the Kremlin as a European attempt to act as the main player in a geopolitical theatre. A role that could recognize the Russian Federation as the undiscussed hegemon within the contested region. Granted that, it is quite easy to understand why, after months of silences, Moscow has rushed to organize a meeting. Depicting the latter as ‘crucial’, Putin has been able to test both South Caucasian leadership and their willingness to assess and address the reconciliation process. This Russian posture should be interpreted trough the lenses of Державност (derzhavnost) – namely, the historical sentiment of predestination and messianic grandeur deeply rooted within the Russian state apparatus. Remotely compared to the American ‘Manifest Destiny’, Moscow allows a similar interference degree within which it recognizes itself as a competitive player in the ‘Near-Abroad’. Having no longer a grip on the region, Putin would less likely tolerable a debacle under today’s circumstances.

Second, the same posture of the Russian Federation in the area remains nonetheless rather perilous. On November 16th, in the midst of clashes along the Armenian-Azerbaijani borders, the Armenian Security Council invoked a Russian intervention on the basis of the Friendship, Cooperation, and Mutual Assistance Treaty signed by Yerevan and Moscow in August 1997. The latter, plenty of precise words and binding statements affirm that the contracting parties must intervene whenever the counterpart sovereignty, territorial integrity, and security would be threatened (Tamrazian 2021). In the present situation, any kind of Russian direct answer to a similar request would have resulted in a backfire for Moscow. In case of a negative answer to Armenia, the Russian diplomatic position could register a heavy setback not only for what concerns the Caucasian framework. It could also impinge on the universal foreign policy approach in light of the credibility of its actual foreign policy strategy.

On the other hand, if the Russian Federation had decided to honor its commitment and intervene militarily to defend Armenia, Moscow would have been compelled to renounce the precious (and anything but obvious) formal neutrality which characterizes the Russian peacekeeping presence in the contended territories. A “boots-on-the-ground” presence which nowadays represents one of the main leverages in the Kremlin political toolbox for the South Caucasus. Having a great awareness of its country’s importance as a Russian ‘Pivot-to-Southern Caucasus’, it is highly probable that the Armenian political establishment aimed at knowingly stimulating Moscow’s response. Despite the fact that Baku would have reacted to such a development of events, in almost any case Yerevan would have had positive consequences for Yerevan (Sukiasyan 2021).

If it holds true that Azerbaijan counts on Moscow to appease the feeling of revenge that has spread like wildfire in the entire Armenian society since the end of the „44-days war“, it is also proven that Aliyev’s government is rather aware of the fact that the presence of the Russian armed forces on the spot could last much longer than foreseen by the 2020 agreements. According to Moscow’s military interventions in the „Near-Abroad“ after the collapse of the Soviet Union, the military presence in Nagorno-Karabakh might, even if in the guise of peace-keeper, de facto allow the Armenian minority to hold the reins of local political life, thereby provoking harsh criticism from Baku and reinforcing the Azerbaijani fears over the Russian contingent ‘partiality’ (Frappi 2021, Trenin 2021).

Moreover, Moscow’s peacekeeping management model has not so far fallen into Yerevan’s subtle demands, thus substantiating a diplomatic action aimed at protecting the balance of power already in place in the South Caucasus. Vis-à-vis Azerbaijani discomfort, Moscow is being capable of reaffirming its leading role in the sub-national dynamics by preventing further mass-scale escalation. In this regard, another diplomatic success achieved by the Kremlin with the Sochi summit was to keep Erdogan on a “waiting room”. As a matter of fact, Turkey, the main international supporter of Azerbaijan and an increasingly influential actor in the territories adjacent to the Black Sea basin, has not participated in the trilateral meeting. There is no doubt that the Turkish absence from the Sochi meeting can damage the role that Turkey will play in the future of the region. In fact, Turkey has already managed to politically penetrate the sector as a guarantor of security and compliance with the agreements of November 2020. Such a penetration, which has been officialized through the creation of a joint Russian-Turkish monitoring center in the Agdam region, has not impeded President Erdogan to have an official call immediately after the end of the Sochi works (TASS 2021).

In the very end, however, Vladimir Putin’s intention to preserve its prerogatives for the South Caucasus has also shown Russia’s intentions over its ‚Near-Abroad‘. A scenario which, if proven true in the near future, could yet again hit the nerve of the majority of Azerbaijanis and, perhaps, move Turkey-Russia’s situational partnership to a new phase of subtle confrontation such as in eastern Ukraine.

Source of the picture: https://www.aa.com.tr/en/politics/leaders-of-russia-armenia-azerbaijan-to-hold-trilateral-meeting-in-sochi/2428454?fbclid=IwAR1qy_BkjjmKQ9d42PHsUnxX4K-f1bFAkMv3yzMA_2vcETdH7BCJ3cnc7r8

Frappi, Carlo (2021). „Engaging and Constraining the Bear: Azerbaijan and the Russian Peacekeeping Mission in Nagorno-Karabakh.“ Accessed on 11 December 2021, https://www.ispionline.it/en/pubblicazione/engaging-and-constraining-bear-azerbaijan-and-russian-peacekeeping-mission-nagorno-karabakh-32098