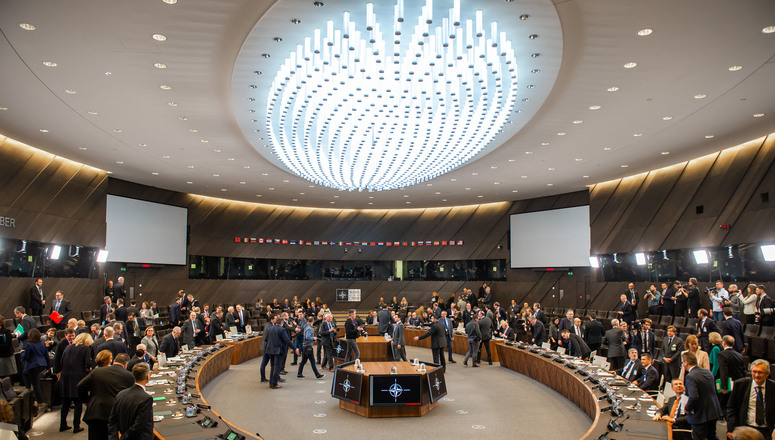 It is well understood through various international relations theories and concepts, such as realism and security dilemma; that the military spending numbers in themselves are an indicator suggesting the growing distrust among international actors and communities which effectively enhances strategic instability. The increasing global nuclear spending (ICAN 2021b) exhibits the ongoing threats regarding this particular weapon of mass destruction proliferation, nuclear weapons. Nuclear risks are crucial geopolitical-security threats for all international actors including NATO. With the fear of the repeated history of Hiroshima and Nagasaki, efforts for arms control and disarmament were initiated in the Cold War era.

NATO’s contribution and Arms control, Disarmament, and Non-proliferation (A.D.N.) efforts are no stranger to one another. The history can be traced back all the way to the 1960s and after the end of the Cold War era. NATO also has reduced the number of nuclear weapons in Europe according to its nuclear weapons strategy (NATO 2020).

NATO’s senior officers explicitly stated that NATO does not want an arms race, threats regarding nuclear weapons development in Russia and China are often cited as legitimacy for NATO’s nuclear deterrence strategy existence (NATO 2020). This, like various security policy cases around the world, implies the ripples of the changing global geopolitical and security dynamics impact NATO’s deterrence position, hence its implication on the non-proliferation of the pact. NATO allies often cite NATO’s stances as their own regarding nuclear non-proliferation efforts. However, cities in NATO countries​ have adopted resolutions in support of their countries joining the TPNW, including Washington, D.C., Paris, Berlin, Barcelona, and Toronto (ICAN 2020). Therefore, understanding NATO’s nuclear disarmament efforts in the scenario of today’s world will help establish a better comprehension of NATO’s future position regarding global nuclear deterrence.

Like most of the security alliances in the world, nuclearization is the initial factor that drove NATO’s deterrence strategy. This particular nuclearization emerged around the early 1950s with a series of global events such as the Korean War and U.S. production of fusion weapons (Nuti 2021).

However, NATO’s nuclear disarmament efforts took their turn significantly after the Cold War ended. One of the significant milestones exhibiting the shift in the alliance’s goals is shown through the report “Future Tasks of the Alliance “ led by the working which was run by Pierre Harmel who was the Belgian’s Foreign minister. This “Harmel Report” it was presented and initiated the concept stating that the military strength and tensions reduction agenda is not necessarily contradicting (Nuti 2021). The Harmel report marked NATO’s first milestone on its nuclear disarmament contribution. Some significant milestones following this report also included a “Comprehensive Concept of Arms Control and Disarmament” in 1989, a statement in its “2010 Alliance Strategic Concept” in 2010 and the NATO “Deterrence and Defence Posture Review (DDPR)” in 2012 (NATO 2022).

Global regimes regarding arms control, disarmament, and non-proliferation (ADN) are currently facing serious challenges. This is shown by the deterioration of numbers of the Arms control regime in the past several years. One of the most significant events is the crash of “The Intermediate-Range Nuclear Forces Treaty (INF Treaty)” which was, for decades, a bilateral agreement between the US and USSR (Nuclear Threat Initiative 2019).

Looking from the treaty association aspect, the treaty on the Non-Proliferation of Nuclear Weapons (NPT), which is one of the most crucial treaties regarding nuclear non-proliferation in the world, NATO does have the principle which stated “the nuclear – weapon states of the Alliance maintain absolute control and custody of their nuclear weapons” (NATO, 2020) which abided to the NPT’s article I and II regarding the transfer of nuclear weapons between nuclear-weapon-states (NWS) and non-nuclear-weapon-states (NNWS) (Arms Control Association 2019).

The Alliances and the Ban Treaty

While explicitly supporting the NPT, the new entry disarmament treaty such as the TPNW which is sometimes referred as “the Ban Treaty”, was not supported by NATO. This stance backed up by NATO’s argument regarding TPNW stated that the treaty is rather “odds” considering the existing non-proliferation and disarmament architecture (NATO 2021). It also stated that the treaty’s lack of verification mechanism, it will contribute to nothing but false hope and also risk the chance of undermining NPT’s work and efforts. This, however, is a common debate and argument regarding states which support and do not support the TPNW. Nevertheless, NATO insisted that this stance against TPNW has nothing to do with its support regarding nuclear arms control and non-proliferation.

However, the ICAN has made an interesting suggestion regarding NATO’s position with the Ban Treaty via its report title “NATO: A Non-Nuclear Alliance, Why NATO members should join the UN Ban on Nuclear Weapons” which is suggesting that not only that TPNW is in line with NATO’s stands for disarmament and nuclear non-proliferation but some of NATO member states itself also support TPNW (ICAN 2021a).

NATO’s stance regarding TPNW may not imply NATO’s efforts regarding disarmament and non-proliferation per se. However, given the nature of the deterioration of disarmament and its relevance regimes, especially one closely intertwined with NATO (Protela 2021), it is a great example of an affair to be observed.

Threats regarding nuclear weapons and the arms race are still relevant in today’s international political arena. Arms control, Disarmament, and Non-proliferation (ADN) regimes are currently facing various challenges. From the increasing global tension to emerging technologies, these also require NATO to rethink its efforts once again in order to make sure that it is ready for the upcoming future and has invested its very best front in contributing to global strategic stability affairs. There are also arguments that suggested that NATO should reassess its position regarding its stance on TPNW.

ICAN (2021a): A Non-Nuclear Alliance: Why NATO Members Should Join