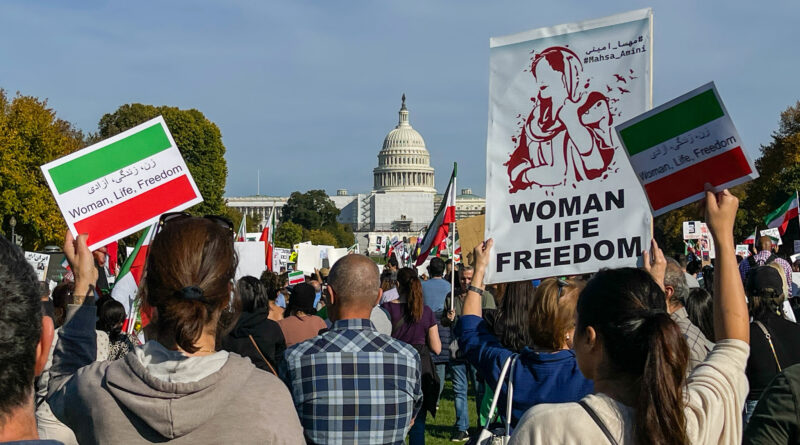 16.9.2022 – Date, when Kurdish girl Amini died after 3 days of detention by the morality police. The reason for being arrested was the insufficient fitting of her hijab. Some of the sources and messages from the youth stress that her hair was visible only a little bit. Even though Iranian officials claim the death was caused by health conditions and complications affecting her health before the detention, it caused mass protests in Iran as well as around the world. Moreover, her family was not even able to see her in the hospital in Tehran, where she died.

The first protests were seen in the Kurdish town Saqez, where the victim was buried. The protests and unrest have spread across Iran but also abroad very fast.

On the 10th of October, huge protests emerged in Germany to support the fight of the youth in Iran. Protests were seen also in Australia, the USA, Italy France, Sweden, and for instance in Switzerland.

Iranian officials have reacted intensively from the very beginning to stop the whole surge, using live bullets. Although Iranian officials have been controlling social media and the sources of information have been greatly limited, several videos have been shown online. Security guards and revolutionary guards can be seen using violence, and live bullets against Iranian protesters, even against young children.

On the other hand, according to the new hijab law, all girls and women who will publish photos of themselves without hijab will be excluded from social rights for 6 or 12 months.

As primarily young people emerged in the streets, it has influenced all spheres of social life in the country. Professors from high schools as well as universities officially signed a document requiring to release of all their students who are in detention.

Also, workers from oil companies have supported the protests, which might lead to an increase of the pressure on Iranian officials.

What is very interesting to see in these protests is that even though many generations and parts of Iranian society are strongly conservative, even these people are seen being part of the protests, supporting the freedom and respect for women in Iran. Women and men are walking alongside Iranian streets.

As almost 350 victims are reported by human rights organizations, including 43 children, the protests have started to be also against the reaction to it from Revolutionary and security guards in Iran. Unfortunately, this information differs from the official reports from Iranian representatives and is very hard to confirm the exact numbers. However, it was officially confirmed that more than 1000 Iranians have been charged over their participation in the surge, and around 16 000 Iranian have been detained. In the case of those under detention, there is a high potential of being executed, which has been strictly and intensively condemned by other countries. Around 20 people have been already  facing the death penalty.

An essential act has been done by Vice President for women and family affairs, Ansieh Khazali, who publicly expressed her concerns in Iranian media that women cannot be under any disrespect and that the situation must be solved immediately. Furthermore, she also requested the investigation of police activities and a report of the whole incident. In general, many public figures are in danger for showing their support for protesters and detainees. More than 40 journalists have been arrested.

Foreign influence and connection of other parties

It is crucial to perceive this surge as something very serious not only for the Iranian people but for neighbouring states and others as well. Women in Afghanistan, in Kabul, have been protesting in front of the Iranian embassy and are closely monitoring the whole situation. The Kurdish centre of the Iranian Kurdistan political parties has called for a strike, to support young Iranians demanding freedom for women and the end of oppression there. This happened before the whole incident happened and Iranian officials have been perceiving it as activity against the system and ayatollah, but furthermore as an act against stability in the country.

Moreover, Iran has pointed out that the US and EU or Israel have been influencing the whole situation, especially via public media and the presentation of the Iranian situation.

The whole situation can also influence the negotiations over JCPOA and the future of the Nuclear agreement. The first point of view is that some of organizations and countries are worried about Iranian activities in nuclear programs in connection to the current protests. It can be seen as a very good situation for Iran to continue enriching the Uranium and hide its activities over the attention of the whole world on the protests.

From the other point of view, as many countries have been considering another set of sanctions, the whole negotiation can be more complicated or postponed in general. Which would put the whole region at a high level of security risk.

During the last few days, Iran also asked Russia to support its activity to stop the surge. The help should include advisory consulting and equipment for stopping it.

Today, 4.12.2022, a new official report and statement have emerged in worldwide media. The Morality police, responsible for the arrest of Amini, is suspended. The morality police were developed by Mahmoud Ahmadinejad, as a tool how to spread the culture and clothing regulations. Its existence is dated since 2006.

Attorney General, Mohammad Jafar Montazeri said in the religious conference that “Morality police have nothing to do with the judiciary”. His answer followed the question of one of the participants about why the morality police have been terminated.

However, it does not mean the Morality police will not be restored. It can be just a temporary solution in order to calm down the protesters and stabilize the situation. Moreover, the binding regulations related to clothing are still valid and applied.

It is a question of whether the Iranian society will be satisfied enough with this decision, or, whether it will be demanding more and we will be witnesses of another Iranian revolution. These protests are, as has been discussed during the last months, the biggest since 2009 and, of course, 1979.

Walker, Tony (2022). Women-ledprotests in Iran gather momentum – but will they be enough to bring about change?, The Conversation, accessed November 20, 2022,  https://theconversation.com/women-led-protests-in-iran-gather-momentum-but-will-they-be-enough-to-bring-about-change-192165

Assawi, Danya, Bansinath, Bindu (2022). What to Know About the Protests in Iran, The Cut, Accessed November 26, 2022, https://www.thecut.com/2022/10/women-across-iran-are-protesting-the-morality-police.html

Source of the picture:  Yasin Ozturk/Anadolu Agency via Getty Images