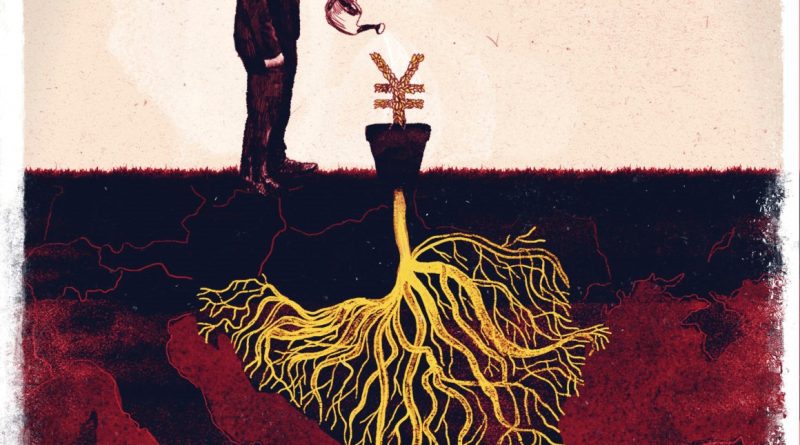 ’A foreign hand will scratch you, but not where you’re itchy.’’

“China is a sleeping giant. Let her sleep, for when she wakes she will move the world.”

Chinese leverage is not solely associated with certain African countries where most of the academic attention is heading. In fact, Chinese ambitions are worldwide to become a global player. Considering China, as an omnipresent actor might not be that preposterous. At the same time, China considers itself as an ‘’inherent superior’’ (Allison 2018: 207).

‘’China’s fingerprints are everywhere ‘‘, David Ignatius (2018) mentions for the Washington Post, and the Western Balkans (WB) is not any exception. Why is that so? There is no easy answer but one thing is clear, China tries to spread its influence in WB countries ‘’that will likely one day be full-blown members of the European Union.’’ (Karnitschnig 2017). And allies within the EU structures is always worth having, for instance, to secure Chinese investments (Vuksanovic 2017). Furthermore, the key actor working in China’s favour is currently Serbia which opens the door to WB for Chinese foreign investments and infrastructure projects (Le Corre and Vuksanovic 2019). Moreover, Chinese activities are part of the ambitious economic strategic plan One Belt One Road initiative with its goal to pave a new silk road (Tonchev 2017: 1) to boost the national economy. Hence, China’s revelation was not a coincidence. Chinese banks are also very generous in terms of their loans in WB offering quickly accessible loans which, as experts have warned, might have potentially resulted in deb trap diplomacy (Crosby 2019) if WB countries will not be capable to pay back. This situation could have already been seen around the world, lately in Sri Lanka when building the Hambantota port (Moramudali 2019).

Regarding the Chinese increasing role in WB, it seems that there is a considerable lack of influence in Kosovo. There are various factors why is that so. It can be Serbia which has not reconciled yet with Kosovo’s independence and simultaneously perceives China’s main partner in Europe (Surk 2017) and in this game China stands for Serbia – ‘’Chinese Ambassador to Serbia Li Manchang has said that as far as Beijing is concerned, Kosovo is Serbia – and that it shall remain that way’’ (b92 2018). Li also aptly portrayed these relations between China and Serbia as „the golden age between Beijing and Belgrade“ (ibid.) whereby Beijing agreed on $3 billion packages of economic investments and military purchases (Zivanovic 2018). In other words, Serbia has sought China’s support over Kosovo dispute as well as to support Serbian falling apart economy which cannot hold up without a considerable amount of investments (Vuksanovic 2017). Another reason is that China has never principally recognized Kosovo’s declaration of independence in 2008 due to geopolitical, inter-state matters and sovereignty disputes (Rey. D etc. 2018: 20; Lagazzi and Vít 2017: 4). What is more, the unrecognition was also supported by NATO bombing in 1999 during which the Chinese embassy was coincidentally hit by NATO strike (Lagazzi and Vít 2017: 4). For these causes, the Chinese attitude is strongly determined by the relations with Belgrade. Therefore, given the fact that the current conditions are rather comprehensive, this article is aiming to explore and examine the Chinese influence in Kosovo, if there is any.

If we look at the economic volume of both countries, we can conclude according to the latest data that the total trade in million Euros is rather low (see the table below). From these numbers can be certainly seen that trade with Serbia plays a significant role.

[1] Alike BRICS countries, Indonesia, or for instance Spain which firmly advocates Serbian position due to Basque country or Catalonia (Glenny 2012: 684). 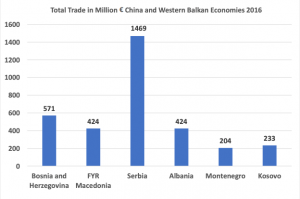 However, according to IMF analysis from 2018 (see the table below), the data shows that China is the third most important economic actor if we consider the value of the total trade. Nevertheless, compared with the EU countries it is almost five-times lower.

In terms of export, Kosovo is not even worth mentioning. Moreover, Kosovo is excluded from the economic 16+1 format where China ‘’has defined three potential priority areas for economic cooperation: infrastructure, high technologies, and green technologies’’ (CEEC 2016). On the other side, Kosovo is one of the members Western Balkans Chamber Investment Forum which is a joint initiative of the Chamber of Commerce and Industry in Serbia and the Kosovo Chamber of Commerce which could be considered ‘’as being a step ahead of politics in Belgrade concerning the non-recognition of Kosovo’’ (Bastian 2017: 39).

As it could have been seen above, China’s economic influence represents a marginal role comparing to the European Union or Turkey. When looking at the numbers we can trace the EU still plays a significant role considering that the EU contributes by 60 % of foreign direct investments (FDI) and 73 % trade. China’s contribution is about 3 % FDI and 5,7 % trade. Moreover, much of the Chinese attention is heading towards Belgrade (Day, Ryan 2019).

One might have thought that China solely determines its relationship in economic terms towards Kosovo. Nevertheless, China has also several times expressed its concerns in terms of security. This particularly happened on 14th December 2018 when Albanian dominated Kosovo’s parliament ‘’approved new legislation to transform the 3,000-strong, lightly armed Kosovo Security Force into an army that would grow to 5,000 active troops and 3,000 backups in the next decade’’ (Surk 2018). In return, Belgrade announced that this legislation concerning the Kosovo Army ‘’has jeopardized peace and security in the region’’ (Bacigalupo 2019). Afterwards, Serbia turned its attention towards the United Nations to discuss the new ongoing circumstances (ibid.) which Serbia perceives as an existential threat within fragile security stability. Due to the close relations between Belgrade and Beijing, as described above, China refused the creation of any Kosovo army without any hesitations (Bashota 2019: 81). However, on the one side, the new legislation had been unilaterally accepted without the Serbs parliament minority and also NATO opposed to creating a Kosovo Army ‘’unless the constitution was amended with the support of the Serb minority.’’ (Bytyci 2018), thus, there are doubts on both sides. On the other side, Kosovo president Thaci had expressed himself at the UN Security Council in New York that “nothing extraordinary happened in Kosovo’’ (Rudic and Morina 2018). Since then the situation has not somehow significantly changed and remained the same if we do not count considerable lack of money which Kosovo needs to keep the army in relatively good shape (Begisholli 2019).

To sum up, it can be stated that Kosovo does not have the primacy in China’s Western Balkans foreign policy. What is more, according to Vesna Bashota‘’ the activities of the Chinese Office are unknown’’ (Bashota 2019: 81). Even though that Kosovo would be interested in intensifying the common economic bonds with China, especially when Kosovo declared support for the One China policy and immediately closed all kind of relations with Taiwan, nothing has really changed so far and any kind of significant Chinese activities cannot be traced (ibid.), and probably  in the foreseeable future any important changes might not have been seen as long as Kosovo remains unrecognized by its crucial neighbour, Serbia.

Politico, China is investing heavily in countries that might one day join the EU.  13. 7. 2017

Bastian, Jens (2017). Report1 prepared by Dr Jens Bastian for the European Bank for Reconstruction and Development (with funding from the Central European Initiative) (Athens/London: EBRD).

China is investing heavily in countries that might one day join the EU. Politico. 13. 7. 2017 (https://www.politico.eu/article/china-serbia-montenegro-europe-investment-trade-beijing-balkan-backdoor/, 8. 8. 2019).

Lagazzi, Alexandr – Vít, Michal (2017). The Good, the Bad and the Ugly: Chinese influence in the Western Balkans (Prague: Europeum).