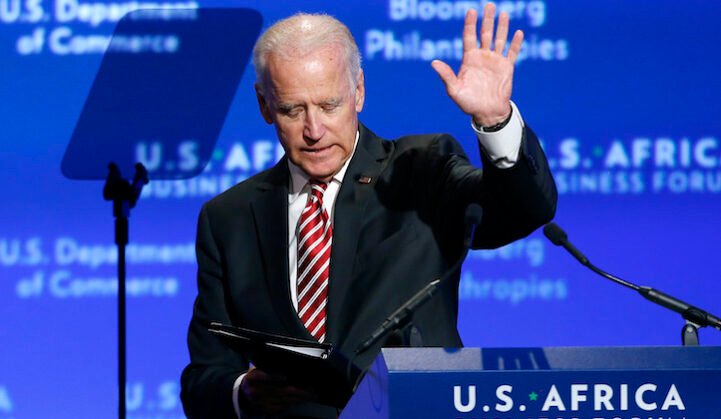 The recent US presidential election has been a turbulent process that officially ended on 14th December, when the Electoral College formally declared Joe Biden the winner and the new president-elect of the United States of America. After four years of Donald Trump’s presidency, many people in the US and around the world are looking forward to a change in both domestic and foreign policy. The US’s reputation abroad has been tainted in the past four years, due to Trump’s rejection of multilateralism, authoritarian-like behavior, and his ‘America first’ approach.  Since Trump’s election in 2016, Africa has not been of much interest to the Trump administration, apart from some derogatory comments about African countries, a travel ban imposed on some African nations, and some hints at challenging China and Russia’s interests on the continent. What will be different for Africa with Biden as president? How will Biden approach a relationship with African leaders and the African people?

Some of the main concerns in Africa are security issues, violation of human rights and the democratic process, as well as economic development, and China and Russia’s influence on the continent. The security concern is mainly in the Sahel and Nigeria, in Somalia, and Mozambique because of the presence of religious extremist groups, such as the ISIS and Al-Qaeda affiliates in the Sahel, Boko Haram in northern Nigeria, Al-Shabab in Somalia, and Cabo Delgado in Mozambique. Recently, Trump declared that he would withdraw American troops from Somalia, in an effort to keep his 2016 campaign promise to exit from the so-called ‘forever wars’. Back in 2018, Trump refused to assist peacekeeping missions, and John Bolton – the then National Security Advisor – declared that the US would limit its financial support of UN peacekeeping missions in the Central African Republic (CAR), Democratic Republic of Congo (DRC) and Western Sahara. In his election campaign, Biden also pledged to disengage from long-lasting wars, so there is a low expectation from the international community and the African people that the Biden administration will actively get involved in the fight against terrorism by sending new soldiers on the ground in the Sahel or Mozambique.

Even though Biden’s campaign website does not provide many details on the president-elect’s agenda for Africa, there is a section dedicated to the African diaspora. During his campaign, Joe Biden not only promised he would fight for racial equality in the US, but he also declared that he would reverse Trump’s travel ban on his first day of office. This will positively affect the African countries included on the travel ban list – Eritrea, Libya, Nigeria, Somalia, Sudan, and Tanzania – and facilitate visits and immigration to the US, not only from these countries but from all African nations.

On the economic front, Biden “told CFR [Council on Foreign Relations] that Washington should help African countries develop by strengthening trade relationships and opening new markets for U.S. businesses.” [1]. The decision to invest on the continent is also related to Washington’s concern regarding China and its influence in Africa. In recent years, the Asian country invested in many countries across Africa and became one of its main economic partners. During his campaign, Biden promised he would be tough on China, and the perfect stage to do so would be to challenge Beijing on its influence on Africa by forming economic partnerships with African nations.

Joe Biden and his vice president Kamala Harris are likely to take a different approach to Trump when it comes to promoting democracy and human rights around the world. The soon-to-be-former president ignored the violation of human rights in Cameroon’s English-speaking regions where hundreds of people have been killed in recent years due to tensions between the French-speaking majority and the English-speaking minority. He also did not show concern in the recent crackdown on peaceful protests against the Special Anti-Robbery Squad (SARS) in Nigeria. Trump’s silence on government violence on civilians and his acceptance of autocrats sent the message to authoritarian leaders that their behavior can be accepted and should not be questioned. The promotion of human rights and democracy in Africa is part of Biden’s foreign policy agenda. On one side, this shift in approach can be positive for Africans because international attention can bring awareness on local issues, and at least start a conversation about change. On the other, the behavior showed by the Trump administration towards democracy, its institutions, and human rights has been appalling. The rejection by President Trump of the outcome of the recent presidential elections is a clear example. The American reputation as a promoter of democracy around the world is compromised.

Something important to point out is that Biden included some experts on Africa in his cabinet. Nicholas Burns, an expert on Sub-Saharan Africa and the Maghreb; Michelle Gavin, a special assistant for Africa on the National Security Council during the Obama administration, a former US ambassador to Botswana between 2011 and 2014, as well as a former US representative to the Southern African Development Community (SADC); and Susan Rice, a former National Security Advisor during the Obama presidency, and an assistant secretary of state for African affairs between 1997 and 2001, where she worked on the crisis in DRC, Ethiopia, Eritrea, and Sierra Leone. The hope is that thanks to these people’s expertise, Biden will closely engage with African leaders, and create a new partnership that can benefit both the US and the African continent.

In the past four years, Trump almost ignored African nations. He never visited the continent during his presidency, and the few times he mentioned African countries, it was to degrade them, criticize them, or impose tough policies that affected negatively the African population.  Even though Biden did not put Africa as a priority in his campaign agenda, the hope is that in the next four years he will become more interested in creating a relationship with African nations, not only to provide guidance on economic development, and to promote the respect human rights and democracy, but also see African countries as real and equal partners on the global stage.

Afrique, Jeune. “US: Who Will Advise President Joe Biden on Africa?” The Africa Report.com, The Africa Report, 9 Nov. 2020, www.theafricareport.com/49681/us-who-will-advise-president-joe-biden-on-africa/.