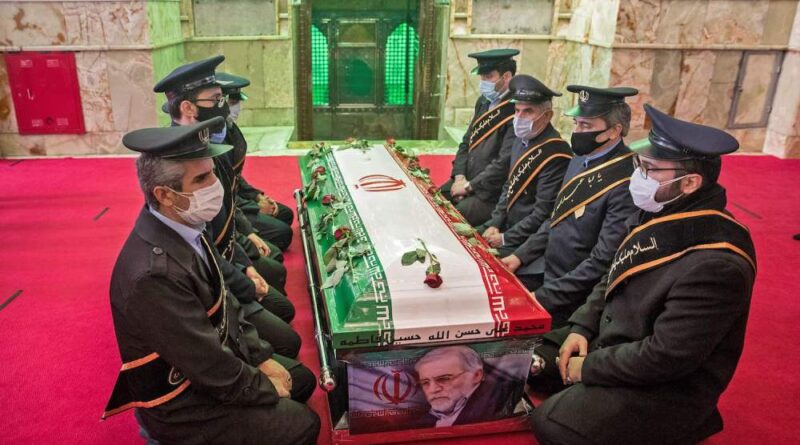 The assassination of the nuclear scientist Mohsen Fakhrizadeh has been opined to be part of a sequence of “a pattern of escalation and a context”.[i] It has been contrasted with the assassination of the Iranian General Qassim Soleimani in early 2020, Majid Shahriar who was similarly an Iranian nuclear scientist, and Masoud Ali Mohammadi who was an expert in particle physics. Another attempted assassination additionally took place on the same day as Mohammadi’s on Fereidoon Abbasi Davani who was the head of the Atomic Energy Organization of Iran from 2011 to 2013 and is said to have worked with Fakhrizadeh along with Mohammadi. The pattern further was seen in Natanz wherein Mostafa Ahmadi Roshan who oversaw a department at Natanz uranium enrichment facility was assassinated.[ii]

Fakhrizadeh, on the other, was even more influential and performed a vital function in the country’s nuclear program in the early 2000s, however, some speculate that his work continued following the dismantling of the Iranian nuclear weapons program in 2003.[iii] Nevertheless, some have observed that the assassination followed the confirmation[iv] of firing up of advanced uranium-enriching centrifuges at Natanz, the primary Iranian enrichment site, by the International Atomic Energy Agency (IAEA), the United Nations’ (UN) nuclear monitoring agency. This is in a long line of breaches that have already been perpetrated by Iran including the increasing of enriched uranium’s purity and its quantity which have been part of a response to the US withdrawal from the Joint Comprehensive Plan of Action (JCPOA) and the return of US sanctions.[v]

Moreover, Fakhrizadeh’s role has been purported to have worked on the assembly of a nuclear warhead under the guise of the acknowledged civilian program which is likely to have played a part in his assassination. A United Nations report referred to the activities overseen by Fakhrizadeh as have been “in support of a possible military dimension to [Iran’s] nuclear program”[vi] within the so-called Amad Plan[vii] The Iranian has alleged and accused that Israel[viii] and the Mujahedin-e Khalq (MEK), a “regime change”[ix] organization which has been exiled and operates from outside the country, of the assassination due to the high level of security around Fakhrizadeh coupled with the sophistication of the attack including the utilization of Artificial Intelligence.[x]

Israel has neither denied nor confirmed the allegations. A MEK spokesperson has denied the accusations and called them “rage, rancor, and lies”.[xi] Nevertheless, Israel has been stridently opposed to any attempts by the Iranians to build a nuclear weapon in addition to considering any such acquisition as an existential threat. Scholars have opined that a recent report by the IAEA may have exacerbated these perceptions.[xii] There have also been reports that Israelis had assassinated a top al-Qaeda leader, Abdullah Ahmed Abdullah or Abu Muhammad al-Masri, in Iran in the same month Fakhrizadeh and “mysterious explosions”[xiii] which have raised Iran’s threat perception as well as put a spotlight on its relations with a Sunni terrorist organization.[xiv]

Moreover, Israel’s Prime Minister Benjamin Netanyahu had made a reference to Fakhrizadeh in a speech on Iran’s nuclear program in 2018.[xv] Netanyahu likewise claimed that Fakhrizadeh headed the Organization of Defensive Innovation and Research (SPND) of the Iranian Defense Ministry and heading the Amad project. According to a report released in 2011[xvi] by the National Council of Resistance of Iran (NCRI), an opposition group, Fakhrizadeh was a deputy defense minister, a brigadier general in the Islamic Revolutionary Guard which has been designated as a terrorist organization by the US and was part of the Iranian ballistic missile program.[xvii] He was also personally sanctioned by the UN as a proliferation risk due to his efforts to acquire “technologies”.[xviii]

Additionally, he was named in a 2007 UN resolution on Iran’s participation in nuclear or ballistic missile pursuits.[xix] Previously, Iran had refused to acquiesce to the demands from the IAEA to allow the questioning of Fakhrizadeh by UN inspectors emphasizing his academic credentials.[xx] Furthermore, it has also been indicated that Fakhrizadeh had the “full trust”[xxi] of Ayatollah Khamenei along with the knowledge of most of the aspects of Iranian nuclear efforts, and as such his assassination could have wide-ranging consequences for Iranian nuclear ambitions.

Another facet of the assassination is the perception that the attempt was to derail the Iranian ambitions in the last months of President Trump’s terms as President-elect Biden has been slated to restore the JCPOA.[xxii] This could result in limited or “small-scale retaliation”[xxiii] through a proxy as Iran waits for a response from the incoming Biden administration, however, concerns remain in the future of a retaliatory assassination.[xxiv] Nonetheless, the US involvement in the assassination remains in doubt as President Trump some months prior had asked for options regarding Iran’s nuclear infrastructure.[xxv] There has also been a convergence of interest in the last months of President Trump’s Presidency between the US, Israel, and Saudi Arabia which might have dictated the assassination.

This has also made an Iranian response probable for “psychological balance and political”[xxvi] face-saving. Nevertheless, a situation of intense hostility and friction has been created which might make US-Iranian relations difficult in the future. Furthermore, apprehensions have been voiced about overutilization and the normalization of the assassinations as “a tool of statecraft.”[xxvii] For the Iranians, the assassination has further raised issues related to their capability to maintain secrecy and security which might be exploited by rivals.

Notably, the multiple dimensions of the assassination have been used by a reason by experts to suggest that there might only be limited or no accountability such as in the case of Shahriari case[xxviii] or a measured response comparable to the one following the assassination of General Soleimani. However, it is important to acknowledge that the Iranians especially the Quds Force could pursue an enhanced presence to pressure Israel along its border.[xxix] Moreover, experts are concerned that Iran may employ its vast proxy web across West Asia for retaliation rather than implement enormous direct state-sanctioned reprisal which would give the regime plausible deniability[xxx] during re-engagement with the US. These activities likewise might be intended in a way to intentionally leave space for Iran to not strike back or make it difficult to do so.[xxxi]  Other considerations for Iran include retaliation which avoids large-scale warfare or destructive airstrike on its defense hardware.[xxxii]

Nevertheless, in the meantime, the status of US-Iran relations remains tense with reconciliation being a distant dream.[xxxiii] The Iranian government, meanwhile, is besieged by hardliners who counted Fakhrizadeh as one of them and are advocating for action. This leaves a difficult choice for the Iranian government which seems to be trapped between acting or to embark on a waiting game till the Biden administration comes to power in Washington. The assassination has provided Iran with leverage or “fresh grievance”[xxxiv] for JCPOA negotiations as compliance without compromises from the US doesn’t appear to be probable including backtracking from the Trump administration’s “maximum pressure campaign”.[xxxv]

In the meantime, the Iranian government has been subjected to demands for a restructuring of domestic security mechanism,[xxxvi]and to subvert those, it had tried to exaggerate the sophistication of the methods of assassination. However, Iran’s deterrent capabilities have been significantly weakened by the anticipation of restraint[xxxvii] by its adversaries which might warrant reforms before retaliation. Additionally, the lifting of the UN embargo[xxxviii] also warrants Iranians access to the resources needed for retaliation.

The assassination has equally acted as an impetus for Iran’s Parliament to proceed with a bill that would halt UN nuclear inspections and if no respite is offered from sanctions on oil as well as banking by the signatories to the JCPOA, the Iranian government is required to increase its uranium enrichment to 20%.[xxxix] This is at the brink of quantity needed for nuclear weapons and is greater than required for non-military applications. This bill is likely to complicate the JCPOA negotiations further and raise regional tensions to high levels.

[ii] Oliver Holmes, Iranian Scientist’s Death only the latest in a Long Line of Attacks blamed on Israel, November 27, 2020, The Guardian. https://www.theguardian.com/world/2020/nov/27/iran-has-long-accused-israel-of-killing-its-nuclear-scientists

[vi] Factbox: Who is the Iranian Scientist killed in Tehran?, November 27, 2020, Reuters. https://in.reuters.com/article/iran-nuclear-scientist-fakhrizadeh-factb/factbox-who-is-the-iranian-scientist-killed-in-tehran-idUSKBN2871XI

[xiv] Top Iranian Nuclear Scientist’s Assassination & How it will Impact US Diplomacy in the Middle East, December 1, 2020, ThePrint. https://theprint.in/world/top-iranian-nuclear-scientists-assassination-how-it-will-impact-us-diplomacy-in-middle-east/555063/

Picture: Malekpour, Hamed (2020, November 30). Members of the Iranian armed forces pray around the coffin of slain nuclear scientist Mohsen Fakhrizadeh during the burial ceremony in Tehran, on Nov. 30. Retrieved from: https://foreignpolicy.com/2020/11/30/how-will-iran-react-to-another-high-profile-assassination/.