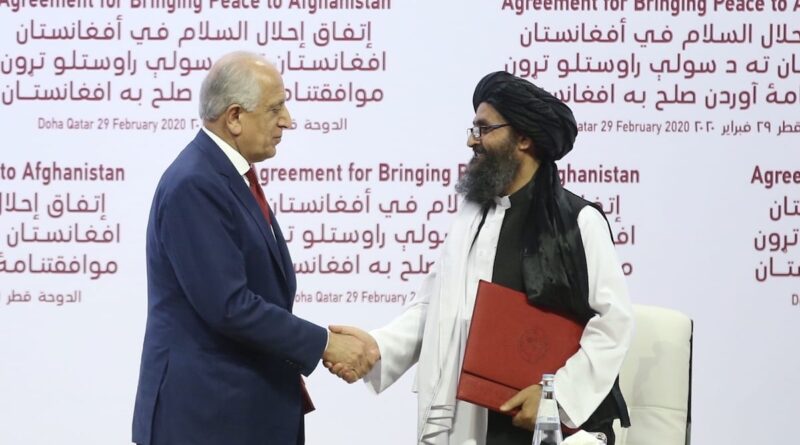 It has already been 19 years of the war in Afghanistan. Through the years, the number of foreign military units has been changing, even the participating actors. Three actors have remained stable: The US, Afghan government, and Taliban, which has, as one of the most crucial actors operating in Afghanistan, played an essential role in negotiating the future state of Afghanistan, including political, military as well as social security.

Since 2018, the US administration has been actively monitoring the situation and discussing it with Taliban and Afghan formal and civil representatives. Furthermore, Khalilzad, as US-Afghan peace envoy, participated in a meeting where he met also Pakistani and other regional governments due to the high importance of stability in the region.

On the 29th of February 2020, the US, Afghan president, and Taliban signed the Agreement for Bringing Peace to Afghanistan, from which the main outcomes should be:

However, all parties have agreed on further sub-points related to future security in Afghanistan. For example, the US can, with the full consent of the Afghan government, participate in security measures in Afghanistan in case of a potential spread of terrorist activities, especially in the case of ISIS or Al-Qaida.

Considering the economic impact of the long-lasting war, the US and Afghanistan agreed on economic cooperation.

The future vision of Afghanistan and potential threats after US withdrawal

The main issue in terms of dealing with new agreement talks is the different vision of the future of Afghanistan. According to Taliban opinion and position, Afghanistan should be unified under Islamic law, whereas the Afghan government is planning to establish, obviously, a democratically led state.

There is also another possible perception of the situation, focused on operating actors in the region. Apart from the Taliban, other terrorist groups have been active which might continue and complicate the rebuilding process.

First of all, it is Al-Qaida, along with ISIS the most “successful” terrorist organization on a global level. Al-Qaida has been closely communicating with the Taliban and has played the role of partner and consultant in terms of the agreement and future steps. Al-Qaida sees the agreement as a win for the Taliban. It is a question of whether the Taliban will remain the main actor and Al-Qaida will be just a cooperator, or if there is a risk of unifying both groups as a single actor and therefore represent a new threat not only for the region. Moreover, the joint action of these terrorist groups would very likely be followed by military revolution too.

Another active terrorist group is Islamic State Khorasan Province (ISIS-K), which has been fighting with the Taliban for the territory. The numbers of its fighters are between 2-4 thousand as many of them have fallen in the open conflict or have been arrested by the Afghan government or US soldiers.

On the 5th of March, 2021, the US diplomatic envoy Khalilzad and Taliban leaders met in Doha, Qatar. Prior to this meeting, Khalilzad met also Afghani representatives in Kabul, in order to discuss the current situation and be prepared for the separate meeting with the Taliban.

During this meeting in Doha, many issues have been discussed, including the continuation of smaller attacks on the US as well as Afghani military units. Furthermore, the change of the US president has led to a slightly changed perspective of US administration. The new US plan is to invite more regional actors such as Pakistan, Iran, India, Russia or China to further discussion. This step might be seen as a move towards a more multilateral way of communication than it was during the Trump administration. However, Iran, Russia as well as China have been supporting the Taliban, especially due to the fact that all these countries need stability in the region, and therefore have been trying to stabilize the position of the Taliban during the negotiations and help to handle the whole situation in a moderate way. As it is needed to have a mutual communication and agreement with Taliban, new condition from their side has occurred. Approximately 100 Taliban members will be taken off from the UN list of terrorists.

It is a question of whether the extended participation of foreign actors is going to be helpful and efficient, or whether it will increase the even now very complicated level of communication. The Russian and Iranian influence and ideological connection with the Taliban should be perceived as a high-risk factor, which should be supervised very closely by the UN security council and Afghan administration. We have experienced that foreign influence and protection of its own interests have never brought stability in the region or the needed help for increasing the mutual cooperation towards rebuilding stability.

Moreover, the potential unification of Taliban and Al-Qaida would represent a new terrorist threat on a global level. Many people worry about the withdrawal of US and UN troops as they do not feel completely secure and do not fully trust the agreement, especially in terms of the Taliban’s credibility. They feel a potential risk of a military revolution and Taliban overtaking Afghanistan, which might potentially lead to another open conflict including foreign interventions.

Even though the Taliban should have been continuing in intra-Afghan talks, the reality has been different, as the Taliban has been communicating only with the US officials. Furthermore, the Taliban has not been fully binding the agreement as attacks on Afghani as well as US units have continued. Unfortunately, the support from Iran and Russia has not been only political. Very likely, there has been a support of Taliban’s military attacks in Afghanistan, which have been continuing regularly across the whole country. The country has still been divided into Taliban and Afghan administration’s territory.

Last but not least, the economic perspective should not be put aside. Even though the US has undertaken itself to economically support Afghanistan in re-stabilization and post-conflict reconstruction, it is a question under which circumstances will be the US willing to keep its promises.

Women rights and their role in the peace talks

During the last two decades, Afghani women have gone a long way to a better perception of women and equality. Currently, we can see women in high positions, managerial roles, ambassadors, etc.

On 31st of October 2020, the UN Security Council published a new resolution number 1325, where the importance of women in the peacebuilding processes is stressed out, and the biding rule for including the theme in negotiations and peace talks. Furthermore, human rights and women and girls’ rights have to be implemented.

However, the direction of the US communication is more towards the general rights of women instead of pointing out the necessity to abide by this resolution. Afghani women, rightfully, feel the emergency of the right perception of women’s rights. There has been a concern of Taliban presence in future Afghan government or its significant role in new Afghanistan in general, as the role of a woman under Taliban perception and vision is not equal, more discredited within the society according to Taliban religious and cultural ideology.

On the 18th of March, Russia hosted an international security conference, where representatives of the US, Russia, China, Pakistan, Afghanistan, and the Taliban discussed further peace steps. Only one woman was invited, Afghani member Habiba Sarabi. The question of women’s rights within the Middle East has been put aside several times during conflict negotiations and currently, it seems to be the same situation again. It is important to mention that 51% of inhabitants in Afghanistan are women and should not be excluded from the peace talks.

The concern about the future of women, girls, but also minorities has been strengthened by the Taliban’s statement which said that they will not accept the solution where a political system would be above them. However, the Afghani president, under the peace plan, has planned to organize new elections within 6 months.

It only proves the complexity and extremely complicated character of this conflict and the very difficult position of all acting actors participated in peace-building talks. The position of the Taliban is definitely the strongest one regarding the past decades and shows the delicacy of all negotiations. The most important question probably is what will be given at stake with relation to the Taliban’s position and what will be abandoned?