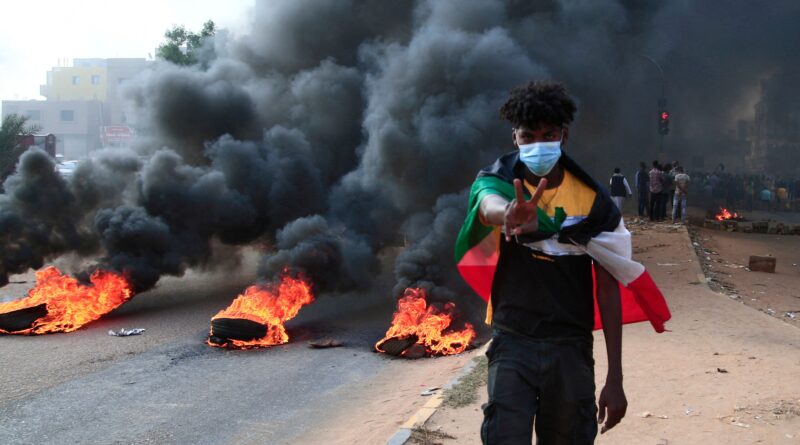 In the last year, Africa experienced a rise in military coups, the most recent was in Sudan, a country that has been facing political unrest since 2018, when people started to protest across the country to express frustration for the high prices of food and economic stagnation. Protests continued until April 2019, when the then leader Omar al-Bashir was forced to step down after 30 years in power. A new period of stability and a path to democracy seemed near for Sudan, and the Forces of Freedom and Change (FFC) coalition formed by civilians and rebel groups present in the country signed a power sharing agreement with the military in July 2019. The rebel groups signed the Juba Peace Agreement in 2020,  and a transitional government was established, made of both civilians and members of the military. The hope that Sudan could finally establish a democratic government quickly faded in October 2021 when a military coup deposed the transitional government.

Before the coup, the civilian population was ready, after years of unreliable politicians, to have a solid civilian government, begin the process of transitional justice after the revolution of 2019 and gain justice for the victims of the protests, and finally exit a period of economic stagnation and unemployment. They did however express some frustration with the civilian government because the economy was still stagnant and it appeared that the military had no intention of paying for the consequences of their actions during the 2019 uprisings.

With the civilians‘ dissatisfaction with the government, the military saw an opportunity to take full control of the Sovereign Council, and organized a coup to gain power. In the days after the takeover, people went to the streets to protest against the military ascendancy to power, and demand the return of the democratic transitional process. The Sudanese Professionals Association (SPA), made out of educated professionals, called for strikes across the country with the aim of halting economic activity in order to express people’s dissent with the coup and their demand to return to a power sharing between the military and civilians in the transitional council. In response to protests, the military forces opened fire on protests killing 20 people, and blocked access to the internet to prevent the population from organizing new marches.

It’s clear that the military highly miscalculated people’s dissatisfaction with the civilian government, as well as the sophistication of Sudanese activists who involved protesters from all social classes and backgrounds. The military thought they could regain power without much dissent from the population. However, the people of Sudan showed that they will not tolerate other years of military rule or undemocratic governments, and they are fighting back with strikes and protests. But what was the military trying to achieve?

At the time of the coup, General Al-Burhan was the chair of the Sovereign Council, and the FFC had been vocal in wanting to have a change in guard in November, in accord with the transition process. Prime Minister Hamdok had also started investigations on the violence and human rights violations committed by the military forces during the protests in 2019 while Bashir was still in power. With the coup, the military most likely wanted to avoid any repercussions. The coup was also a way to get those politicians who are sympathetic to the military’s involvement in the government.

There have been speculations on whether the military received external support. Countries like Egypt have expressed interest in supporting Sudan and its military because they are in need of an ally against Ethiopia in the dispute over the Grand Ethiopian Renaissance Dam on the river Nile. The Egyptian representative at the African Union (AU) voted against the motion to suspend Sudan after the coup. The United Arab Emirates have been close to Sudan’s previous government, and would like to see the military remain in power in order to gain business partners in the country. Russia is interested in forming a relationship with the Sudanese military to have permission to build a base on the coasts of the Red Sea, and has shown its support. If foreign powers did help the Sudanese military staging the coup, Al-Burhan will have supporters that will help him hold power for as long as he wants to.

The political transition that began in 2019, actually brought some positive changes to Sudan from an international level. The United States (US) decided to end a decade long embargo and take Sudan off the State Sponsors of Terrorism list, so that the economy could startt to recover from years of isolation. Other western countries also started to send aid to the new Sudanese government in order to help the post-Bashir economic recovery. However, after the coup president Biden and other western governments decided to freeze millions of dollars aimed at assistance to the new government, confirming that a military involvement in Sudan’s fragile political transition can be harmful to the process and for its future as a potential democracy.

After the coup on 25th October, people kept protesting, and the military was forced to hand over the cabinet to Prime Minister Hammock. On 21st November, Hamdok signed an agreement with Al-Burhan to restore the transitional process, which included Al-Burhan’s wish of creating a new government of elite politicians. The agreement was met with resentment by the Sudanese people, who felt betrayed by Hamdock. On 19th December thousands of people marched to the presidential palace in Khartoum, to commemorate three years since the first protests against the then president Omar al-Bashir and their wish of a civilian government, but they were met with teargas and violence from the military.

Before the September coup attempt and the successful October coup, hope and optimism for a new Sudan was realistic and almost palpable. However, after the events in the past two months, it is difficult to envision democracy. More than 40 people have been killed during the protests, and many more arrested. All the sacrifices the Sudanese population has made since April 2019 seem like they have been for nothing. Accountability for the military forces and justice for the victims of the 2019 protests will probably never be brought up again, creating obstacles to the transitional justice and peace process. The elite and the military are back in power, and with the long history they have at holding control of the government, it will be difficult for them to step back and let democracy do its course.

Gavin, Michelle. (2021). “The Crisis in Sudan: What to Know”. Council on Foreign Relations. Accessed December 12, 2021, https://www.cfr.org/in-brief/crisis-sudan-what-know

Lons, Camille. “The Gulf States and the Sudan Coup – All Is Not What It Seems.” International Institute for Strategic Studies. Accessed November 18, 2021, https://www.iiss.org/blogs/analysis/2021/11/gulf-states-and-the-sudan-coup