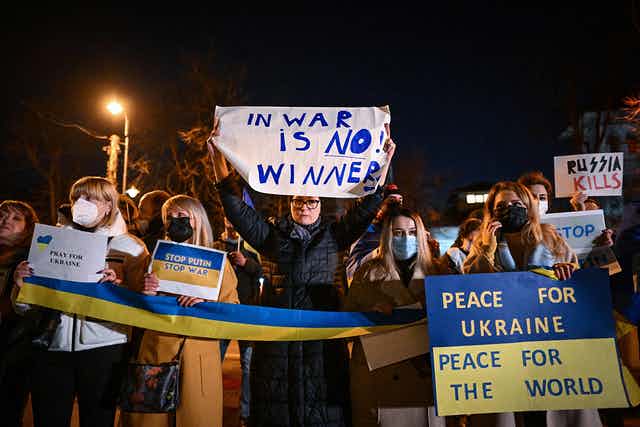 On the early morning of the 24th of February, Europe woke up to a dreadful morning. Many people didn’t want to believe incidents. It was a slap to the face of all diplomats sitting in the UN Security Council, to people working in field of international justice, questioning of decisions made by the International Court of Justice, all those who believe in “rules of games”. That morning brought disappointment to people not only in Europe but around the world. In fact, we have been already for some time witnesses of “the show of violation”, misinterpretation and misuse of the international law, inflationary violation of the UN Charter – sadly by one of its permanent members. The rules that states set up after world war II codified the major principles of international relations, were perverted.. Jus ad Bellum refers to the conditions under which States may resort to war or the use of armed force in general. The prohibition against the use of force amongst States and the exceptions to it (self-defence and UN authorization for the use of force), set out in the United Nations Charter. In a recorded video, the president of Russia claimed he decided to conduct a military operation based on a request for help from Donetsk and Luhansk republics. He constructed his actions based on Article 51 of the UN Charter and mutual friendship agreement with Donetsk and Luhansk. This justification for war has several serious legal issues.

The right to Self Defence

The nature of self-defence comes from the common rationale of lawfulness to repel violence with violence. Article 51 of the UN Charter indicates a self-defence as an inherent right of a state that is based on individual or collective self-defence.[1] The wording inherent right is mostly in literature attributed to the tradition of positive law and jus natural against armed attack. ICJ affirmed this view when it referred to Article III of Definition of aggression as customary law. However, it also declared that there is no arising right either to the individual or collective self-defence against acts which do not constitute an armed attack.[2] The ICJ in Corfu Channel case[3] recognized the right of self-defence as support in principle of non-intervention and equality of states stating that respect for territorial sovereignty is an essential foundation of international relations. Such a decision generally endorsed the importance of Article 2(4) and the need for legal assessment before the invocation of self-defence. Referring to the situation in Ukraine, there is a critical issue between the breach of territorial integrity and the right to self-defence.

Article 51 of the UN Charter

“Nothing in the present Charter shall impair the inherent right of individual or collective self-defence if an armed attack occurs against a Member of the United Nations, until the Security Council has taken measures necessary to maintain international peace and security. Measures taken by Members in the exercise of this right of self-defence shall be immediately reported to the Security Council and shall not in any way affect the authority and responsibility of the Security Council under the present Charter to take at any time such action as it deems necessary in order to maintain or restore international peace and security.”[4] (UN Charter)

The first issue becomes with the constitution of the armed attack and its requirement for invocation of Article 51 of the UN. Some scholars advocate so-called narrow interpretation of the relationship between Article 51 and 2(4). Therefore, any armed attack is illegal, and defending state is strictly bound by the proportionality principle.[5] The ICJ distinguished between ‘the most grave forms of the use of force’ and ‘other less grave forms’, and only the most grave form constitutes an armed attack.[6] Additionally, ICJ expressed its view that ‘States do not have a right of collective armed response to acts that do not constitute an armed attack.[7]

With regards to the interpretation of international law there is a missing trigger of an armed attack in general. The president of Russia did not refer to any particular armed attack. We can think about series of incidents by paramilitary groups such as the Azov Batalion.

The group has been controversial, and it was accused of spreading extremist content, propaganda and recruitment of neo-nazis from all over Europe[8]. Also, the group Azov has been implicated in a number of violent incidents outside of Ukraine. The Soufan Center has identified ties between the Christchurch shooter and Azov.[9] However, Russia did not present any evidence of even a directly planned or already executed attack on Russia. Despite presence of extremist organizations, the gravity for the armed attack is desperately missing. The gravity of attack as a precondition for the use of force as self -defence is missing.

What constitutes a military intervention by invitation legal? Furthermore, is the legitimacy of a self -pro-claimed government a legally sufficient?

Despite the consensual character, the military assistance to inviting state might raise two crucial questions about its lawfulness Firstly, it is about the intervention that endangers the collective security system, by genocide, war crimes, crimes against humanity, cannot be considered as legal.[10] Another challenge is intervention by invitation in contrary to territorial integrity as Article 2(4) of the UN Charter prohibits states from using force against the territorial integrity or political independence of another state. The third question is about the legality of newly created republics, and question of their independent government.

Where to go next?

Source of the picture: https://theconversation.com/international-law-says-putins-war-against-ukraine-is-illegal-does-that-matter-177438

[1] Charter of the United Nations

[2] Case Concerning Oil Platforms (Iran vs the USA) [2003] para 48, the US used the wording „Inherent right to take defensive action against the attack.“

[5] For example, Josef L. Kunz, ‚Individual And Collective Self-Defense In Article 51 Of The Charter Of The United Nations‘ (1947) 41 The American Journal of International Law <https://www.cambridge.org/core/journals/american-journal-of-international-law/article/individual-and-collective-selfdefense-in-article-51-of-the-charter-of-the-united-nations/6503C6622F31575AB631D5C7E02DBF70>.accessed 6 January 2020.

[8] Blackwater is in the Donbas with the Azov Battalion – World Beyond War (https://worldbeyondwar.org/blackwater-is-in-the-donbas-with-the-azov-battalion/)