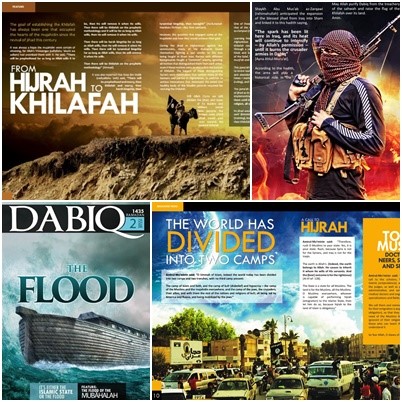 Dabiq serves as one of the main communication tools mirroring the life in the Islamic caliphate and the way it functions, as well as it justifies Islamic State’s (ISIS’s) religious and political ideology. It reflects the perception of how the ISIS’s “brothers” view themselves and what is their main intention after the caliphate’s establishment. However, when reading it one should consider the fact that the material is one of the main propaganda tools and thus, not all of the claimed statements are to be taken as the truth necessarily. 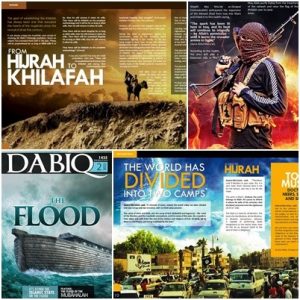 The name that ISIS chose for its magazine equals the name of a village in the northern Aleppo province called likewise, where the supposed final apocalyptical battle between the “crusaders” and Muslims is to take place, when the right time comes. As William McCants points out in a study “ISIS Fantasies of an Apocalyptic Showdown in Northern Syria” published by Brookings Institution, ‘In a prophecy attributed to Muhammad, the Prophet predicts the Day of Judgment will come after the Muslims defeat Rome at al-`Amaq or Dabiq, two places close to the Syrian border with Turkey. Another prophecy holds that Rome’s allies will number 80. The Muslims will then proceed to conquer Constantinople (Istanbul).’

Stressing the importance of Dabiq as an ideal place for the last fight against infidels, the quote of Abu Mosab al-Zarqawi, beloved chief of former Al Qaeda in Iraq, opens its every issue claiming that: ‘The spark has been lit here in Iraq, and its heart will continue to intensify – with Allah’s permission – until it burns the crusader armies in Dabiq.’ The status of ISIS as an independent structure divided from its other rivals is also underlined in Dabiq’s rhetoric, where Abu Mosab al-Zarqawi is being quoted instead of other leading jihadi figures. Harleen K. Gambhir notes in her study “Dabiq: The Strategic Messaging of The Islamic State” published by the Institute for Study of War that, ‘Quoting Zarqawi, rather than Osama bin Laden or another Al Qaeda (AQ) leader, underscores ISIS’s desire to frame itself as an independent organization religiously superior to AQ or Jabha al Nusra.’

Each and every issue of Dabiq is themed, having different name and a main headline, suggesting the main topic which the present copy deals with. It usually discusses the key happenings on the domestic as well as the international scene from ISIS’s point of view. Keeping its readers up-to-date with ISIS’s performance towards the world outside their ruling, the so-called Dabiq team provides us with reports on the territory advancements and the attacks executed by caliphate’s soldiers in every issue. By reading Dabiq, the fans and members of ISIS are provided with the news from their most credible primary source. The military reports are always accompanied with the pictures from the battlefield and the columns inform the targeted audience about the battles and territorial gains. They refer to it as to a “liberation” of the lands, which are thereafter under the rule of ISIS in the cases of their victory. Claims made in the magazine are being further supported by the digital visualizations of the adversaries who fell thanks to the soldiers of ISIS, as well as the hostages that are being kept by the ISIS. Sometimes the call for ransom of the hostages is raised on the very last pages of Dabiq.

Via Dabiq, ISIS communicates its visions to the world. Harsh critique of the opponent jihadist movements and the western leading figures often follows. Islamic jihadi movements not allied with ISIS are being approached and criticized through Dabiq. For instance, the eighth issue of Dabiq blames the Levant Front to ally with AQ in Syria, whereas the eleventh copy of ISIS’s magazine directly opposes AQ and its affiliates, accusing them of cooperation with the crusaders. ISIS perceives everyone who is not their member or at least supporter as either apostate or crusader. The western officials are usually being mocked by the editors. Each and every imprint of Dabiq includes the section titled “The Words of Enemy”, where the editors issue authentic statements of personalities perceived as crusaders. By such actions, the editors of Dabiq make their supporters aware and updated about the notions in which they, as a common community, are understood by their enemies.

But it also brings a message to those trying to counter the ISIS digital propaganda that the statements claimed by the high-ranking western officials are being under close surveillance and monitoring of the other side and can be misused in favor of the further propaganda and resistance, by ISIS.

In order to be more attractive in the eyes of its followers, almost every issue of Dabiq offers an interview conducted with some of the leading figures of the ISIS membership. People interviewed are usually the commanders of different provinces under the rule of ISIS. Next sections that Dabiq includes are devoted to historical lessons, providing further justification of their cause and to the reports from different provinces. There is also a rubric aimed at the female audience. Although the women’s role in the caliphate is secondary it is still important, and by the section devoted to women Dabiq team aims to appeal to more female supporters.

The last page of Dabiq always closes with the depiction of a peaceful photo of birds flying over the river or the illustration of nature, etc. The calm picture is being supported by an utterance of a leading figure of Islam, as ISIS’s ideology perceives them. Such a propaganda closure is supposed to leave the readers with the tranquil feeling, further strengthening their confidence in doing the right thing when fighting for the cause.

At a first glance after opening the file, Dabiq seems as any other western non-propaganda magazine in terms of the tech savvy which its creation surely requires. But the reality is that the magazine presents a deep ideological doctrine of ISIS and its focus.

Author’s note on sourcing: All the issues of Dabiq are available at the website of The Clarion project, which were used also for the purposes of this article.