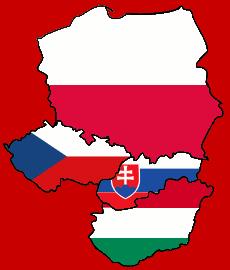 Central and Eastern Europe remains a sensitive area of clashing great geopolitical concepts and the rivalry of military-political blocs. In the 20th century the above mentioned area was dominated by the competition between Russia/the USSR and Germany, later in time of “Cold War”, by eastern and western blocs. Presently,after a redefinition of old theories and doctrines, Central and Eastern Europe again became an area of rivalry between the Euro-Atlantic structures and the Russian power.
At the same time, through over the last 100 years, we can observe the emergence of integration initiatives aimed at empowering the countries of the region. They base on intellectual heritage of great historical concepts, such as the Jagiellonian idea and they materialized in the form of regional military and political-economic alliances and associations. The history of the 20th century showed that neither federation nor confederation concepts, nor attempts to build opposing military blocks withstand the passage of time and were not able to transform into an effective system of collective security in this part of the continent. However the majority of the countries in the region embarked on the integration process of the EU and NATO initiated after the end of the “Cold War”. Nevertheless, the leaders of the countries between the Baltic, Adriatic and Black Sea did not abandon further sub-regional integration initiatives aimed at strengthening the potential of this area in international relations – the most recent initiative of this type is the Three Seas Initiative.
 Does in time of the political, social and economic crisis of the

-Does in time of the political, social and economic crisis of the European Union and the tightening rivalry between NATO and Russia, such concepts can be effective and does the old idea of Intermarium in the new version have a chance of implementation?
 What role the Central and Eastern Europe, integrated in the framework of the Three Seas initiative, will play in the geopolitical game of the powers?
 Is the Three Seas initiative an attempt to strengthen the eastern flank of the European Union, a new division within the EU or a counterbalance to the German-French power?
 In what areas the countries of region should strengthen the ties between them?
 What are the goals and interests of the Central and Eastern Europe states and what divide them?
 To what values, ideas and concepts from the past can we derive in process of creating political and economic constructions in the 21st century?
 Where is Ukraine going and what is the future of this important element of international order in the region?

Answers to these and many other questions will be sought by the conference organizers and participants of the International Scientific Conference “From Intermarium to Three Seas Initiative. Integration and Collective Cecurity Conceptions in Central and Eastern Europe in the 20th and 21st Centuries”. We kindly invite researchers, experts and analysts in the fields of international relations, diplomacy, geopolitics, law, economics, history, and securitology to exchange ideas, opinions, views and doubts related to the experiences and forecasts of integration initiatives in Central and Eastern Europe. Suggested thematic areas of the conference:

Present
 Central and Eastern Europe in the contemporary geopolitical thought and geopolitical doctrines of the superpowers;
 Central European countries after the disintegration of the bipolar division of the world: the abandonment of federal concepts and the path of integration with the EU and NATO;
 Subregional cooperation initiatives in Central European countries (Central European Initiative, Visegrad Group, CEFTA, Baltic Council, Three Seas initiative);
 Initiatives for energy and transport security in Central and Eastern Europe (Nabucco pipeline, Baltic Pipe, Via Carpatia, Via Baltica);
 Military cooperation of Central European countries within NATO; does the security environment and the military potential of the Three Seas countries create a need and give the chance to create a military alliance?
 Eastern Partnership as an Eastern dimension of the EU policy;
 Sub-regional dimension of the Ukrainian conflict;
 References to the concept of Intermarium in Polish political thought in the Third Polish Republic – eastern politics of Lech Kaczyński;

Future
 EU crisis and possible return to the concept of a Central European federation;
 Areas of cooperation between Central European countries in the area of security (fighting against international terrorism, efforts for energy security, common immigration policy);
 The Polish-Croatian Three Seas Initiative as an opportunity to strengthen the cooperation of the EU countries from Central and Eastern Europe in the field of economy and energy to reduce dependence on Russian energy system;
 The area of Intermarium in great powers geopolitical games;
 Three Seas Iinitiative: a threat or support for V4, NATO, EU (PESCO)?
 Political, economic and military aims of joining Germany to the group of Three Seas states;
 The importance of US support for the Three Seas initiative;
 The interests divergences of the Three Seas states and Germany in the aspect of energy policy – construction of the Nord Stream 2;
 Federalization, occidentalization or return to the Russian sphere of influence – visions of the future of Ukraine.