To defend your enemy, bring up his kids – Chinese proverb

Russian soldier hunts a family in their house (source: https://www.youtube.com/watch?v=jXpvC5-P49g)

A lot of people outside the gaming community are convinced that computer games are simply just fun. They can spend hours talking about their destructive impact, about the promotion of violence, immoral behaviour, etc. Some movies might be taken this way, too. However, a lot of people will agree that movies reflect the certain reality of the world we live in. With all the available technology and information, nowadays, computer games also reflect particular global trends, but there are only a couple of comprehensive researches about it.

Call of Duty is probably one of the most world-known first-person shooters game, a phenomenon of the gaming industry. In 2003, when it was released, it has fascinated millions of players worldwide – one could be deployed as a part of 101st Airborne division in Saint-Mere Eglise, drive T34-85 straight to Berlin, flying Boeing B-17 bomber, sneak into Tirpitz or storm German defence without rifle aka Enemy at the Gate. Yet, in 2019, CoD still fascinates the gaming community. Especially when it comes to politics.

Originally the main adversaries were the Nazis, that were fought against by the Soviets, Brits and Americans in the storyline of the game. It has changed since 2007 when Infinity Ward has transformed the series from the WWII shooter to the shooter of the modern era. Therefore, the enemies were transformed as well.

Since the release of CoD Modern Warfare in 2007, unnamed Arab rouge state and its leader Al-Asad, that sought to obtain WMD has used nuclear weapons against the American soldiers that came to liberate that state (CoD MW), Russians have launched an attack on the U.S. and even nuked it (CoD MW2), then Russia conducted series of chemical attacks all over Europe, Russian tanks are seen on the streets of Paris and Frankfurt, but in the end, Russia is successfully defeated by the USA (2011).

Political controversy has become a part of Call of Duty. CoD Modern Warfare 2 (2009) was censored in Russia and became a centre of scandal. The problem is that there was one mission in the game – No Russian. In the plot, the CIA has launched a deep undercover operation in Russia and sent one if its agents to Moscow to spy on the main adversary – Vladimir Makarov. At the beginning of the mission, we see a black screen and hear sounds of loading arms and the phrase “Remember, no Russian”. Afterwards, five armed to the teeth men leave the elevator of the international airport in Moscow and start the mass shooting, which was inspired by the Columbine High School massacre and a Mumbai terrorist attack in 2008, according to a scriptwriter Jesse Stern (Gaudiosi 2009). The level was removed from the PC version of the game, however, remained included in the ones on Playstation and Xbox. 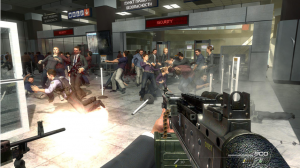 Ten years after, a little has changed. On October 25th, the new Call of Duty Modern Warfare was released and again became a topic of international scandal. The game takes place in a fictional country of Urzikstan (which is supposed to portrait Syria), which was occupied by Russia since 1999 (at that time Chechen war has started) and struggles for its independence in an endless civil war. The conflict has four sides: Russia, presented by rouge general Barkov, terrorist group Al-Katala (can be compared to ISIS), freedom fighters (not the Mujahedin’s) that fight for their democratic country (can be compared to SDF or FSA) and British and American task force. Humanitarian workers wearing white/green helmets are also present in the game.

All that draws parallels with the Syrian war with all its horrors. Executions and killing of civilians committed by Russians, which are unfortunately present in the Syrian war in the real world, add more pressure to the atmosphere in the game.

Another issue is the so-called “grey morality” – when you can not distinguish a friend from a foe or, as Dave Stohl, Infinity Ward co-studio head (Phillips 2019) said “creating an emotionally charged experience that’s inspired by the headlines in the world today, where the rules are grey and battle lines are blurred”. Developers had intentions to show all horrors of war, its dark face as it is. Which was, by the way, brilliantly done – war, in neither of Call of Duty games, looked more real and horrifying than in Modern Warfare. But as these horrors are committed by the Russians, they cement the image of the hostile Russian soldier (that is as big as Ivan Drago from Rocky) who enters houses and kills parents in front of their children, massively executes civilians, and tortures innocent people as retaliation measures.

These scenes look like an episode of HBO TV-series Homeland, Hurt Locker, Black Hawk Down or other patriotic movie but accompanied with dialogues of Russian soldiers – they laugh, crack dark jokes about “liberation” and warn that these executions will be preventive. In the background, one can hear endless cryand moanings of civilians, beaten by the Russian military.

There is also one thing that has angered the gamers community which claimed the following as an American attempt to rewrite history (Dayus 2019). In one episode, one of the main characters – Farah Karim, the leader of the liberation forces, mentions the Highway of Death, an infamous episode from the Iraqi war in 1991. The U.S.–led coalition forces have attacked the retreating convoy of Iraqi military causing death of roughly 800 servicemen. The episode, or better put, the consequences were shot by Kenneth Jarecke, who took probably his best picture – the face of the dead and burned Iraqi soldier that did not manage to leave the vehicle. The picture depicting silhouettes of the face with a skull and burned flesh was rejected to be published by magazines such as Associated Press and the Time (Deghett 2014). In the game, however, Farah testifies that “the Russian military has bombed the people who were trying to escape”.

The same with an episode, that has angered the gaming community, taking place in Haditha. Originally a war crime committed by the U.S. troops on November 25th when 24 Iraqi civilians were slaughtered by the Marines was portrayed as a Russian crime in the game or parallels with the storm of the embassy attack in Benghazi, that was misinterpreted (Kent 2019).

Regarding this, the game was banned from selling on the Playstation consoles, however, remained available for the players of PC and Xbox. Nevertheless, what has to be mentioned, all mentions of Russian troops, Kremlin and Moscow were replaced by the “Barkov men” because of political correctness. This, however, was not enough and the game came under attack by the Russian state media that claimed it as a propaganda and an attack on Russia (Kleymenov 2019).

Alongside it, members of the worldwide gaming community have called it a demonization of Russia but not as a “grey morality”. The game makes clear who is a friend and who is a foe. On Western forums, gamers were disgusted by the game labelling it as an American propaganda (Batchelor 2019). On the Russian internet, the debate still goes on. A lot of famous bloggers and streamers like Ilya Maddyson, one of the pioneers and icons of Russian YouTube, have denied to promote the game (Horton 2019).

Soviet troops in front of McDonalds in the USA, scene from Red Dawn, 1984 (source: https://medium.com/@rickbrownell/red-dawn-a-cold-war-movie-classic-8d1997f0d1e3)

Yet, the international situation right now is very complicated and relations between the U.S. and Russia are not very positive. People hear loud rhetorics from the politicians that both Moscow and Washington are willing to cooperate. At the same time, the U.S., and generally the Western media transmit the hottest topics – “Russian propaganda”, disinformation, hybrid war, etc. In the Russian media, people talk about the same things from their point of view – tricks of the State Department, and what is a vital topic for the Russian state media and pro-Kremlin internet – russophobia. This narrative is very strong in Russia and instantly triggers a patriotically orientated population.

At the same time, anti–Russian narrative of Call of Duty works for the enlightened liberal segment of the Russian population, which claims that the Russian government spends more money on suspicious initiatives abroad, that it does on development of Russia. Which is true. Yet, in global power, 26% of children live in families with income less than subsistence level (RBC 2019) and 4,8% of people are unemployed (Federalnaya Sluzhba Gosudarstvennoy Statistiki 2019). Russian state forgets the credits for 20 billion U.S Dollars to African countries (BBC 2019) and the new Call of Duty, to make it simple, adds more fuel to the fire.

However, if we put aside the conflict between Moscow and Washington, the game works for each ideological mainstream discourse. It works for the not really enlightened U.S. population that believes in the tales of McCarthyism or invisible “hand of Moscow” and are afraid to wake up tomorrow and see scenes like from the Red Dawn, as well as it works for the Russian discourse, where Russia is encircled with enemies’ fortress that are trying to break it apart. Moreover, the game enables the Russian state media to justify its operation in Syria (where it only provides humanitarian aid and fights terrorists) and portray the U.S. and generally the West as the ones who are ought to get the Russians and portray them as evil.

The saddest thing is that the young generation worldwide(!) will play it and see what they see – executions, deaths, supernatural suffering committed by Russia. Through the game they will be fed with an image of a Russian soldier in a marine singlet, beating women and children to death. In an era of post-truth, where the understanding of reality is relative, it is a mind manipulation in a spirit of anti-American/Soviet propaganda during the Cold War. Broadly, it could be called as transmission of national idea of the state, of the ideology. It is like public diplomacy through which the national interest, the foreign policy goals and doctrines, like Global War on Terror are transmitted. It is something that reflects the general political discussion at the high policy level, like for example, the National Security Strategy of the USA and Russia. And it definitely does not build bridges between people but cements an image of who your real (public) enemy/threat is and shows where we ideologically are today.