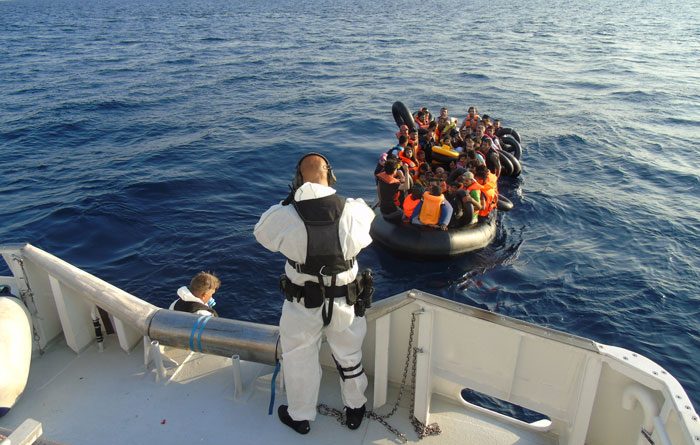 The Arab Spring that erupted at the start of the last decade is one of the most significant events of this century. These waves of demonstrations and revolts affected, with varying degrees of intensity, the North African and the Middle Eastern countries. The outcomes of these uprisings also impacted the neighbouring areas –among which are some European countries- in diverse forms, including mass migration. 2011 was the start of an exponential increase in the number of people that crossed the Mediterranean to reach European shores and left behind their unstable regions. Since then, various European countries have had to face this humanitarian crisis, that would soon turn political.

Of those countries, Italy received a considerable number of migrants because its geographical position made it one of the most accessible entry points. The massive waves of migrants that reached its shores brought with them new challenges for the country on different levels, including those related to the development of security practices dedicated to the securitisation of migration. In this regard, it is important to understand to which extent migrants are considered a threat to society and, therefore, a matter that needs to be secured (Taureck, 2006: 53-61).

Even if scholars have found it challenging to explain the core meaning of the concept of identity (Fearon, 1999: 1-45), it can be used alongside the constructivist theory (Barnett, 2018: 85-99) to analyse the behaviour of society. Furthermore, the different trends within security studies –particularly the Copenhagen School (Buzan, Wæver & Wilde 1998: 21-47) and the Paris School (Bigo, 2002: 63-92, Tsoukala, 2005: 161–192 in Bigo & Guild, 2005)- can be used as a key to outline the Italian scheme to address the issue of migration and relate it to the other actors involved.

The first issue that must be discussed is the relationship between Italy and migration. Scholars mention that the connection between the country and the phenomenon is recent when compared to other European countries. The end of the Second World War marked the begin of enormous migrants flows. That was not the case for Italy, who started receiving migrants during the 1970s (after the oil crisis of 1973) and saw its first laws to regulate migration come to force in 1986 (Caponio & Graziano 2011: 105-120).

The new migration laws rose numerous discussions regarding the condition of foreign workers and the cases of racism against them. However, both politicians and the Italian media have underestimated this issue. Moreover, during the ’90s Italy experienced enormous political changes, shifting from the so-called Prima Repubblica (First Republic) to the Seconda Repubblica(Second Republic). This was a result of numerous political scandals; the old political parties ceased to exist and were replaced by a new political spectrum. Because of this, the subject of migration and its regulation went under the radar until new intensive flows of migrants arrived in the following years.

The matter arose again in 1998 when the centre-left government formulated the Turco-Napolitano law. The legislation introduced considerable changes in the migration sector since its primary purpose was to block illegal immigration and to regulate the migration and naturalisation processes (Magnani, 2012: 643-664). Furthermore, the government introduced the Temporary Stay Centers in order to contain illegal migrants, those who broke the laws and those who needed to be repatriated (L 40/1998).

The Turco-Napolitano law lasted four years, until 2002. In 2001, Berlusconi’s centre-right government took office and worked to pass a new law called Bossi-Fini. The new law aimed to fill the gaps of the Turco-Napolitano law, introducing more restrictive features to attempt to secure the country against migrant flows.

The law was conceived in a period of general unease; the 9/11 events were recent and Italy, like many other countries, was waging war against terrorism. Migration fits in this context because it was identified as the vehicle of social disorder, economic instability and –potentially- an unbearable threat for the population and the political establishment (Magnani, 2012).

Furthermore, the law set up the patrol of the territorial water and the reinforcement of the sanctions against human traffickers in order to stop their proliferation. Also, the law provided the regulation of the work permit and asylum-seeking status. Moreover, it added further measures to control the migrants, registering them, taking their fingerprints and identity photos, as well as increasing the time needed to obtain citizenship (L 189/2002).

As mentioned before and because of its position, Italy is one of the preferred docked points for migrants, just as Libya is their preferred point of departure.  It has to be said that Libya and Italy are not the only countries involved in migration flows, but the movement of people between them is tremendous.

The aftermath of the Arab Spring had a massive impact on the migration flow; in 2012, UNHCR’s reports revealed that roughly 10% of the Libyan population had left the country. That percentage did not include the approximately 2.5 million refugees and migrants that were in transit in Libya waiting to migrate to other destinations such as Egypt and Tunisia (Zupi, Mazzali & Hassan, 2012: 1-35).

The lack of a stable government made the management of migrants within the Libyan territory troublesome, the violations of human rights increased, and the monitoring of the illegal migrants and human traffickers became complicated to prevent (Zupi, Mazzali & Hassan, 2012).

During the first decade of the 2000s, the registered peak of migrants directed to Italy was of approximately 36,000 (2008). In the second decade, the number grew exponentially, reaching its peak in 2015 with over 154,000 people (Paoletti, 2010: 269-289, Zupi, Mazzali & Hassan, 2012). Furthermore, the requests for asylum increased in Italy; despite the country not being the one with the most requests in the EU (and in the world). The situation was unprecedented, and it was challenging for Italy to deal with the issue because, even after the large exposure to migrants, numerous Italian and international scholars agree on the fact that the Italian population has always struggled to see its community as multi-ethnical (Ambrosini, 2011: 175–194).

Academics describe how Italian society had never accepted migration, perceiving it as a threat even in times when the flows were not consistent. The feeling of insecurity was also caused by the politicians, whose narratives depicted migrants as a threat for the community, especially regarding organised crime, terrorism and religion. Notably, these views were shared by right-wing parties, and they included in the list the connection between migrants and drugs trafficking, the increase of prostitution and, most significantly, the change in the native community through the assimilation of their religion and customs and traditions (Tsoukala, 2005 in Bigo & Guild, 2005).

Not even their inclusion in the job market helped migrants to be perceived as anything other a threat “Italian identity”, and political decisions were proof of that. Among other things, the Bossi-Fini law increased the time and requirements necessary to obtain Italian citizenship (Ambrosini, 2011: 175–194). Naturalisation would give migrants many rights, including the possibility to vote the elections. However, as they are still perceived as a threat to the social order, the law prevents them from taking part in politics. A ruling of the centre-right government in 2009 undermined the migrants’ inclusion in the social community, which contributed to the division of society into Italians and others, and reinforced the sanctions against illegal immigration (Ambrosini, 2011).

The media also had a crucial role in the development of the concept of “migrants”. The news outlets of the ’90s spread the idea of the correlation between migration and criminality, which resulted in concern for public security (Paoletti, 2011: 59-78). The press’ narrative of migration and the politicians’ pressure on the need to securitise the issue, exacerbated the tolerance of the population and increased their rancour against the non-EU citizens.

The speech act postulated by the scholars of the Copenhagen school plays a vital role in Italy regarding the securitisation process of migration. It is common for politicians and the media to address migration in Italy as an “invasion”, like some kind of conquest of the Italian lands (Paoletti, 2011). The depiction increased the unease among the population and required more measures to combat migration. An example of this is the Bossi-Fini law (and the judicial procedures that followed focus on intensifying security procedures), which increased the control towards illegal migration and made it more challenging to get the Italian citizenship or the residence permit.

After 2011, many disembarkations took place on the Italian shores, and the rhetoric of both politicians and the media continued to describe migration an invasion which purpose was to threaten the security of the Italian population.

The securitisation process is not easy to achieve, and it takes time to reach the stage of desecuritisation – a concept defined as the necessary procedure to demolish the concepts that generated insecurity in the first place- (Huysmans, 2008: 124-144).

Overall, numerous scholars believe that the most effective way to move from securitisation to desecuritisation, and then to asecurity (identified as the stage in which the threat is labelled as a standard-issue and addressed as a political problem) (Vaughan-Williams & Peoples, 2010: 75-88) is to secure migration through national institutions (and their practices). This would contain the population’s unease by moving the threat from the security domain to the political one (Bourbeau & Vuori, 2015: 253-268).

The securitisation of migration in Italy should be analysed from different perspectives in order to understand if the Italian approach is valid; however, each one of them will give a different verdict. The most coherent mode to proceed would be to examine securitisation in two different ways; the first one regarding the constructivist perspective, the second looking at the institutional practices. However, human knowledge produces the structures that compose both the society and the notion of identity, which, in the end, influence each other and result in an endless loop.

Before reaching practical securitisation (and desecuritisation) of migration, it is essential to work more on separating the socially-constructed notion of migrants and identity. Italian society is very attached to its conception of identity, and it wants to preserve it and guaranteeing its survival.

The political establishment and the population influence each other. Through its rhetoric and narrative, the establishment increases the unease among the community, who then perceives migrants as a threat and demands the necessary measures in order to secure the issue.

Furthermore, the media has an essential function in the securitisation process since they influence society’s behaviour towards migrants by using terms and images that convey the idea that there is an ongoing invasion, and that the community may be in peril.

The Italian practical procedures of securitising migration appear to be effective: when migrants reach the Italian shores, they are restrained, registered, identified and, in some cases, expelled. Furthermore, even though Italy accepted to give international protection to numerous migrants, the country also decided to decline a more significant number of requests on the basis of the need to protect the security of its population (and the European one). It also has to be mentioned that –unlike other European countries- Italy did not experience episodes of migrant‑related terrorism.

However, in Italy, the process of politicisation of migration is far more potent than the securitisation. Politicians, bureaucrats and the media master the social construction of identity and the influence that it has on the definition of notions such as threat and security. So, it becomes challenging to determine the results of securitisation, which are construed intersubjectively, and thus move on to an objective desecuritisation of the issue.

Regarding desecuritisation, the Italian case is demanding for the reason that it seems difficult to achieve. The future challenge for the country and its political establishment is to move the issue of migration from the sphere of security to the asecurity one. There is a need to redefine the meaning of «threat» in the societal sector, that would facilitate the integration of migrants and de-escalate the feeling of uneasiness regarding the threat to the identity.