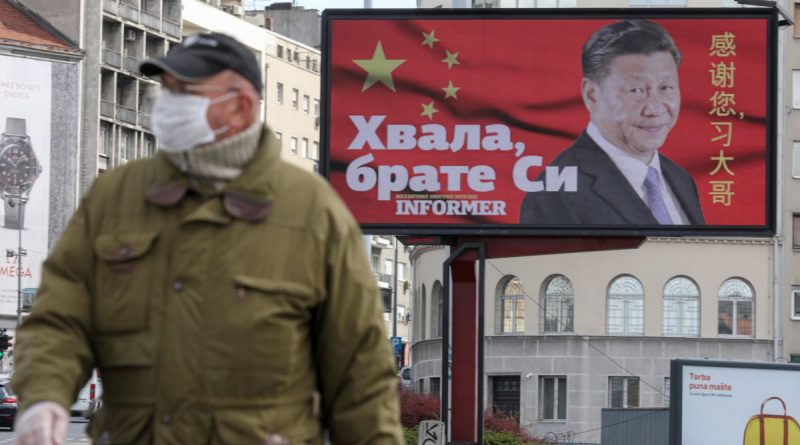 Serbia has confirmed its first case of coronavirus on 5th March 2020, on the very same day, it has been spotted in Bosnia in Herzegovina. By that day, the virus from Wuhan has been spotted in almost every neighbour country, except Bulgaria (8 March) and Kosovo (13 March). According to publicly available information, it was the man, who has been often travelling to Hungary (on March 4 first case was confirmed).

Taking a look at the media discourse, it is apparent that there have been many similarities to the range of other countries (unsurprisingly like Russia, for example) that have chosen the tactics of denial. Basically, as most of the media in the country are, in some way, loyal or non-critical of the government, this resource has been well used.

Particularly one character comes in the scope — pediatric pulmonologist (that is more a media figure than an actual doctor) Branimir Nestorović who literally on 26. February during the press conference called by Mr Vucic, as a true Slavic gentleman who appreciates nicely dressed women, told them to go shopping in Italy, because there are “the biggest discounts”, that it is necessary to wait till April, “get the vitamin D” and the virus will go away together with tons of other absurd remarks (Novosti Online 2020). On that very day, Italy had 445 active cases confirmed with 12 lethal ones.

In only 9 days there have been nearly 50 confirmed cases. Later that day, president Vucic (after cabinet consultations with Chinese partners) has addressed the nation and declared a nationwide state of emergency amid the growing threat. Under the new rules, all citizens older than 65 are required to stay at home, all public events have been cancelled, public transport has been reduced to weekend schedules, all kindergartens, schools and universities have been closed, working hours of restaurants have been limited, but later on they have been closed. The ones to enter Serbia had to stay self-isolated 14-28 days.

Within several days the nationwide curfew had been imposed, movement of citizens, especially older than 65 had been strictly reduced to 30 minutes per day and controlled by the law enforcement structures, land and air communications had stopped, the country had been closed. Violators of the curfew had to be fined and wearing face masks had been advised. Soldiers started guarding entrances to hospitals and governmental buildings. The fear has been set among the people. 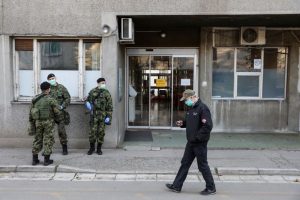 It was, however, not just a simple message that had to unify the nation. Mr Vucic took advantage of the situation. Under the new regulations, the planned parliamentary elections (26th April) were postponed. Also, entire political marketing was forbidden under the sauce, that it would be unethical to criticize the government, which is doing everything it can to save the country. Importantly, such a step is clearly aimed at the opposition, that had been rallying and protesting against the corrupt government, media suppression, and generally authoritarian shift.

Serbian leader also has sent a clear message: “European solidarity does not exist…it is a fairytale on white paper…”, Serbia will deal with the crisis bravely alone, just with a little help from friends… Russia and China (CGTN 2020). Russia (a guarantee of Vucic’s popularity) has sent 11 planes of the Russian armed forces with troops, equipment, and medical personnel. Russian soldiers then, later on, have been broadcasted on the state TV and used by the propaganda machine to determine who is a friend and who is a foe.

But Mr Putin was late. The very next day (16th March) after the state of emergency had been imposed, first Chinese aid started to arrive. Pro-party newspaper Xinhuanet even quoted Vucic, that “the only ones allowed will be Chinese doctors” (Xuequan 2020). The People’s Republic then sent several more planes with aid, what has come under criticism from the EU, that, Vucic is praising Chinese help, showing it off, but avoids far more substantial help from the European Partners (Bildt 2020).

Basically Vucic had found a political Eldorado — 3+ sources of aid, the opposition is silent, no one irrelevant is making troubles. The only thing if it was like that.

The reality for Serbia turned out to be way darker, than Vucic and his propaganda machine had been showing. Yet, the president had been doing a great job of building up an image of a man who is capable of handling with the difficult situation, delivers protective masks himself, accuses the employers of firing their workers, promises 100 euro payments for everyone above 18 years old (the question is how many people will actually get it), postpones mortgage payments, gives 3x wages for the companies, and endorses the contact businesses to produce everything the country needs, except masks. When asked about the place of their origin, the president said “not to ask him” about it, but rather “prosecute me one day for getting my people the respirators they needed”. Simply stated he was doing everything it can to save its people.

At this point, it is reasonable to take a look at this issue from the point of view of society. Many people have been locked up in their flats almost 24/7 with almost zero privacy. The media and the emergency committee had been reporting daily updates and statistics for the past 24 hours. However the information was given to the people partially, many things have remained behind the scenes.

In an attempt to control the population by setting fear and uncertainty, it became frustrating. All together with limited rights, the people got traumatized psychologically and subconsciously, which, in several cases lead to an increase in domestic violence or even suicides. The state has failed to deliver psychological aid to the victims and the ones in need. Everyone right now knows, how it looks, especially right now.

But on the other hand COVID testing was poor and insufficient, many people, with or without viruses have been held in the same room prior to the testing. The whole procedure had been taking long, tests were not accurate, several hospitals, according to a detained and now released journalist Ana Lalic, did not have protection for nurses, lack of equipment, and simple chaos in the organization of work of the hospital (Lalic 2020). This all has to be mentioned with the fact, that the EU was and is the main sponsor of the Serbian healthcare system. The Union had donated Serbia hundreds of millions of euros and equipment. Without it the situation, frankly speaking, would have been darker. 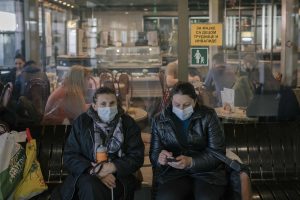 However, what the government has done so far seems to be working. The situation is changing every day. For now, it is promised, that from 27th April curfew will be lifted and intercity connections to be resumed. The country will slowly come back to normal life.

The question is how “normal” that would be. Serbia is not a rich country and the big question is how the crisis will affect it. It is unlikely that after all the payments to the business and individuals that have lost their jobs, savings, and money, the government will have something left. But apparently it is not on the Vucic’s agenda. He is comfortably sitting on several chairs at the same time, and with the same level of comfort, he is getting deeper into debts to almost everyone.

This will leave its trace on the political life of Vucic. Firstly he has been selling him to Russia and Putin to get popularity, to win the elections, to be (read: make an image) a strong leader of a strong nation. Right now this is China’s turn. Start Monday 27 Serbia will come back to normal life with uncertainty. How normal would be the new normal life in the country, that is located in the middle of a love triangle of Russia, China, and the EU? That would be the question for the future.

About the Author: Igor Suvorov is a Russian-born graduate of International Relations at the University of West Bohemia. Igor has conducted various researches and has written several papers on illegal arms trade of the Czech Republic, human rights in the post-USSR countries for Amnesty International Czech Republic. Moreover, Igor has been dealing with matters of civil society and political repressions in the former Soviet Union and modern Russia. In his professional career, Igor runs several projects in the field of migration and integration of foreigners, youth work and social inclusion. During his studies he had completed a bachelor’s thesis with an aim on the US foreign policy in the Middle East. At the CBAP Igor covers Russian influence in the Western Balkans and leads the PR related activities. Reach me out for more details, cooperation, or in case of questions! (igor.suvorov@cbap.cz).