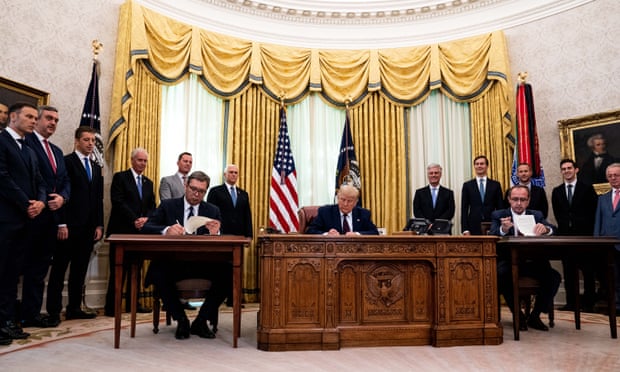 In the last two decades after the NATO intervention in Kosovo, Serbia and Kosovo have met several times, signing some agreements like the Bruxelles Agreement trying to normalize relations between them.

After several years of delays and pause in further negotiation, the dialogue has begun to move again with the curious speed in the last year. The new course started when later this year, Donald Trump nominee as the special envoy for the Balkans, his ally Richard Grenell. The American efforts soon brought to the sign of a new agreement on the air and rail connection between Pristina and Belgrade. These were just some anticipatory agreements to reach the White House’s final signature on Friday, September 4, of a comprehensive economic understanding among the two parties. The undiplomatic American approach followed more an economic aim to reach a sort of agreement as fast as possible without proper coordination with the European Union, the other player involved in the dialogue.

The result was a document signed in Washington, celebrated as a historic agreement by the American President and both the Serbia President Vučić and the Kosovo Prime Minister Hoti. The settlement leaves some doubt on the quality of the document and its real chances of implementation.

The Washington talks‘ first problem was the lack of legitimacy in both Serbia and Kosovo that are going through some troubled political times. In Kosovo, the new prime minister Avdullah Hoti is ruling with a small majority in Parliament, without the support of the last election-winning party (Vetëvendosje party), and a lack of consensus among its citizen on the way is handling the pandemics. Moreover, President Hashim Thaci, the strongman of the country who has led all the previous negotiations with Serbia, seems losing its grip on politics due to the indictment for war crimes by the Kosovo Special Chamber. On the other side, in Serbia, President Vučić has just won over 60 percent of the vote at the last parliamentary elections (June 2020). So, he seems in control of the political situation. Nevertheless, a new government was formed only more than two months after the elections after a mass demonstration in the country against the government and the emergency restrictions. Although the Serbian government’s increasingly authoritarian nature means a lack of democratic support on the general topics, Kosovo included.

Also, the US administration, the guarantor of this new negotiation, is having some internal trouble. The country is in a phase of political camping and, the Trump administration has reached little so far in terms of foreign policy to show to the electorate, so that’s why a document signed at the White House between Serbia and Kosovo might increase the judgment on this administrations‘ work.

The parties‘ political background explains why the agreement signed without long talks and the fact that Kosovo and Serbia didn’t even sign a unified statement during the ceremony. Those elements raise some questions over the nature of the overall negotiation and compromise. The rush in finalizing a document to show to the public seems the main reason behind it. All parties are claiming a winning over the others to gain the necessary support from the domestic public opinion.

The compromise reached among some topics already included in the EU led the negotiation and the Berlin process with some points that are more in line with American diplomatic policy than based on the real Serbian or Kosovar necessity. The documents were signed mainly about infrastructure projects, regional cooperation, border crossing points, diplomas recognition, and missing persons. The deal is ambiguous, leaving space for interpretation and overlapping with other EU efforts to reach a compromise, underlying the lack of diplomatic talks between the EU and the US administration.

An improvement for Kosovo was the declaration of recognition from Israel, but this will come at the price of opening an embassy in Jerusalem. Even if it might bring a fundamental recognition for Kosovo, which in the last years has been the target of an un-recognition campaign, the decision could upset the European and the Muslim partners that are gaining a foothold in the small Balkan nation.

Other points raised some concern, for example, Kosovo’s inclusion in the mini-Schengen area and the joint management over the lake reservoir of Gazivoda / Ujman. Kosovo has scarce water resources, low storage infrastructure, and poor water management with inefficient strategic management; then, any water resources agreement could become very problematic in the future. An arrangement on the water reservoir should have been discussed at a more technical level and only after building trust among the public administration of Kosovo and Serbia. If implemented, the lake’s shared management creates new potential disagreements among the two nations and gave Serbia a powerful tool in its hand.

On the Serbia side, the agreement was important for Vučić in appearing as an ally of the United States and European, without giving too much on this negotiation talks and avoiding the divisive topic for the Serbian public opinion. Moreover, a sign of the new western imagine of Serbia is strengthened by the decision to drop out of the planned military drill „Slavic Brotherhood 2020“ in Belorussia.

President Trump gets the most out of it, allowing to sign an economic agreement between Serbia and Kosovo, showing its commitment to solving a problem in US diplomacy since the Clinton presidency. Trump could also insert in the document a few propaganda points such as a unitary condemn of Hezbollah as a terroristic organization or the ban on the use of Chinese 5G infrastructure. The use of the agreement as a political propaganda tool shows the weakness of the overall document once again. That’s why the accord might not have a long life. In case of a change after the November election, the agreement might bury. The negotiation process raises questions over the alleged US involvement in pushing for a change of government in Kosovo, a move that has undermined the Kosovar participation in the dialogue, undermining its democratic legitimacy in this way diminishing any chances of applying this compromise.

In conclusion, the agreement shows a renewed interest from the Western partner in pushing Serbia and Kosovo to agree to normalize their relation. However, the US approach is affected by problems that have mined its future of the negotiation. Indeed, many other ac-cords are still waiting after years for implementation and, the circumstances made believe that this agreement will not face a different future.
Maybe it is time to change the approach to the normalization negotiation: it is necessary to start to build trust and relationship among different levels of the public administration of the two nations to create a strong foothold for a better implementation of the already existing accords.
Moreover, the agreement on internal politics could cause some trouble to the Kosovo government that needs to explain the reasons behind the signature of this document without having public support. The main opposition party Vetëvendosje, a strong advocate against this document, is collecting signatures to file a motion of no confidence. The threat of early elections is on the horizon of Kosovo politics.
In the next weeks, other meetings will follow up in Bruxelles between the EU and the Serbian and Kosovar delegation, pushing for a reopening of the dialogue on the political side. Further development might be on the horizon.