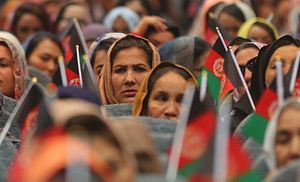 The 31st of October has marked the 20th anniversary of UN Security Council Resolution 1325 on women, peace, and security – a ground-breaking resolution that has affirmed the importance of taking into account gender perspectives in conflict settings. The UNSCR 1325 and the subsequent nine resolutions have created what is known as the Women, Peace, and Security (WPS) agenda, which is composed of four pillars: participation and representation, prevention, protection, relief, and recovery. With a focus on peace negotiations and the participation of women, this article will use a feminist analysis to critique those structures and institutions that, still today, are hindering women’s meaningful participation in formal peace processes with special attention to the ongoing intra-Afghan peace talks.

Despite the implementation of UNSCR 1325, progress in the last twenty years has been slow; the analysis of major peace processes between 1992 and 2019 shows that women have made only 6% of mediators, 6% of signatories, and 13% of negotiators (UN Women, 2020). Yet, when women are included in peacebuilding efforts there are higher chances to reach an agreement and that peace will last longer than peace negotiated only by men (O’Reilly et al., 2015). What are therefore the obstacles that dictate the exclusion of women? And when women are invited to negotiations, which women are represented?

It is clear that to just include women as a quota in the political transition towards peace is not enough, but instead, meaningful participation, that encompasses various groups of women with different identities and ideologies, must be ensured. Accordingly, this article will highlight the weakness of the WPS agenda and the potentiality that the inclusion of women can bring to achieve a long and sustainable peace. Subsequently, the case of Afghanistan will be analyzed I will argue that the exceptional work of women of the Afghan civil society at the grassroots level has not been reflected in their representation during the formal US-Taliban consultations happening in Doha in 2018-20. Hopefully, the obstacles that women are facing will be clarified and some recommendations will be made on how to enhance women’s meaningful participation in the future.

The feminist critique of WPS and the obstacles women are facing

In 2000, after decades of women’s rights activism, the UNSCR 1325 has been adopted with the purpose of addressing the gender dimensions of peace and security. The Resolution and the creation of a WPS agenda have undoubtedly challenged the mainstream conceptions of war and have contributed to recognize the impacts that gender-based violence has during and after conflicts. As a result, 84 UN Member States have designed a National Action Plan to advance the WPS objectives; nonetheless, after 20 years various scholars have highlighted how a significant gap still exists between their policies and their actions when it comes to ensuring women’s participation in peacebuilding. The transformative nature of the feminist agenda has not fully translated into policymaking and “hard security”- militarization, the proliferation of arms, and counter-terrorism initiatives- remain the priority for the majority of the member States. In this regard, one of the main critique to the WPS agenda has been that it is both the result of traditional security conception and structures- given that reflects the UN’s system- and the result of transitional and feminist peace activism- considered that it has been promoted by civil society. In other words, the WPS agenda is poised between the urge to eliminate gender inequalities and promote women’s inclusion in formal political processes, and the need to reflect international power structures and normative frameworks (Zeynep, 2020: 7).

To prioritize militarisation and hard power, and thus shape security and peace in terms of masculinities has pushed the WPS agenda to focus more and more on the protection of women and girls during conflicts, instead of recognizing their role as agents of society. The focus on gender-based violence, despite legitimate and necessary, has also produced a narrative that has confined women to the role of victims. As it will be explained next in the article, women instead have been always active at the grassroots level and often are the first to respond to crises and bear the burden of war. To not recognize women’s agency as meaningful for reconciliation and reconstruction of post-conflict societies, poses serious questions on the terms of their inclusion when peace is negotiated. When, or we should say if, women are invited to take part in formal processes, which women are invited? Evidence shows that the current structures and institutions favor only those women who have access to power and resources (Smyth et al., 2020).

In addition, women are often seen as a homogeneous group. A common assumption sees women as inherently peaceful due to the characteristics of their gender, which puts them all in the same category despite having different political views, religious belief, ethnic background, or economic and social status. In this case, the experience of women in conflict is reduced to a “shared experience” and the needs of women are not addressed to their full extent, with minority groups, such as indigenous groups or LGBTQ, left at the margins of decision-making. Furthermore, women’s political agency is often restricted to “feminized” tasks and their inclusion is limited to issues related to women’s rights, gender, or initiative particularly tailored for them (Otto, 2006: 135). In societies strongly underpinned by patriarchal elements, structural inequalities and gender-based discrimination represent additional obstacles for women’s participation.

To conclude, the gendered bias of WPS and the lack of acknowledgment of the importance of intersectionality severely limit the contribution that women could have for sustainable peace in post-conflict contexts.

Why women’s contribution to peace matter?

While women’s participation in negotiations remains the exception, there is an emerging consensus among scholars that their contribution has an impact on the quality and durability of peace after the civil war (Krause et al., 2018: 987). Women experience conflict differently than men, and for this reason, when negotiating for peace, they have a different set of priorities and they raise concerns that not only expand the peace agenda- going beyond military disputes and considering instead human rights issues- but frequently reflect the needs of the marginalized. This has revealed to be fundamental to address the underlying roots of conflict and has contributed to achieving what Galtung (1996, 2) would call “positive peace”, i.e. not merely the absence of direct violence but also the absence of structural violence and the existence of justice provided indiscriminately to all members of the society. In this regard, formal peace processes can represent a unique opportunity to increase women’s political agency and participation in post-conflict contexts (Anderson, 2016).

For the purpose of the article, women’s contribution at the grassroots level will be highlighted to understand the potentiality of women’s direct participation in formal peace talks. Women’s activist groups can, in fact, influence positively female delegates when it comes to finding an agreement, in this way women’s groups who did not have direct access to negotiations can have their voices heard with the result of advancing gender issues in the peace settlement. To this end, women’s civil society has been found to be extremely active during armed conflicts; women often act as mediators in their communities. Seen as less threatening than their male counterparts because outside of power structures, women can engage in direct talks with armed militias and fighting groups, opening back channels that are fundamental to build trust and start a dialogue among the parties during the official negotiations. Furthermore, when women are the mediators in their communities, there is a higher level of inclusion since they are less prone than men to discriminate based on ethnicity, religion, or political ideology (O’Reilly 2015, 7). The inclusion of different conflict actors is essential to ensure that violence does not reignite in the future.

To sum up, to simply add women into existing power structures and frameworks does not solve either the problem of their underrepresentation in decision-making or the gender bias and the lack of intersectionality embedded in formal peace processes. Meaningful participation must be ensured by recognizing the conflict-resolution efforts made by women’s local groups and by fostering their inclusion during formal peacebuilding negotiations. By contrast to exclude women or to block their participation, could represent a threat to women’s human rights even after the end of the conflict.

Women in the intra-Afghan peace-talks

After decades of the Taliban’s regime in which the human rights of Afghan women and girls have been violated, women’s organizations have worked endlessly to reinstate their rights and to have their voices heard. Despite the struggles of women in Afghanistan have been extensively addressed by the international community, women have been excluded from the 11 rounds of peace talks between the Afghan government and the Taliban currently taking place in Qatar. An analysis of 67 exploratory meetings- formal and informal negotiations and internationally-backed consultations between 2005 and 2020- has found that women were included on 15 occasions (22%) (Kamminga et al. 2020). Overall, women have participated only as part of informal civil society organizations at the local level and, as explained in the first part of the article, this is not sufficient to dismantle structural inequalities. However, we must also consider that Afghanistan is a society with strong patriarchal elements and that the current Covid-19 pandemic is having a great impact on women’s activism.

The momentum generated by the 20th anniversary of the UNSCR 1325 and the setbacks that the ongoing peace-talks are experiencing -due to the re-emergence of violence between Afghan government forces and Taliban in the last months and due to Covid-19- can represent a window of opportunity to push for the inclusion of Afghan women. What are thus the steps that the Afghan government, the international community, and local organizations can take to promote the direct participation of women in formal talks?

Firstly, the Afghan government should not limit itself to adding women as a symbolic representation but instead ensure that different identities and instances are being represented. Moreover, the contribution of women should not be restricted solely to gender and women’s issues. To do so, the Afghan parliament should impose a quota for women’s participation in the negotiation for peace, while at the same time establishing a dialogue with women civil society that are active at the grassroots level, especially in those areas that have been most affected by the Taliban regime. Given that one of the main justification for the absence of local women in peacebuilding is that they are underqualified, the international community should empower and support grassroots organizations through donor funding programs and though projects aimed at training women as mediators and advocates for peace. Lastly, women’s organizations must build solid networks and found ways to strengthen communications across the country. By lobbying and creating links between informal and formal peace processes, local groups have the potential to promote social and political change.

In the last 20 years, the feminist core of the UNSCR 1325, and thus of the WPS agenda, has been diluted to fit into a normative framework that conceptualizes peace and security in terms of power and militarization. As a result, the transformative nature of the WPS agenda has given way to a need of resolving gender inequalities by leveling up numbers; nonetheless to simply adding women as a quota does not result in their meaningful participation, especially in formal political processes. To tackle the potentiality of women’s inclusion for the achievement of peace, particularly in the MENA region, the WPS agenda should reclaim back its feminist nature. In doing so, women’s agency should be restored and intersectionality should be placed at the forefront: identities are plural and overlap, and discrimination happens on multiple axes.

Smyth, F., Hersi, A., Baldoumus, A., and Tonelli A. (2020). Transforming Power to Put Women at the Heart of Peacebulding. Recovered from: https://www.oxfam.org/en/research/transforming-power-put-women-heart-peacebuilding

Zeynep, K. (2020). Feminist Peace and Security in the Middle East and North Africa. London School of Economics. Recovered from: https://oxfamilibrary.openrepository.com/bitstream/handle/10546/621055/dp-feminist-peace-security-mena-210920-en.pdf