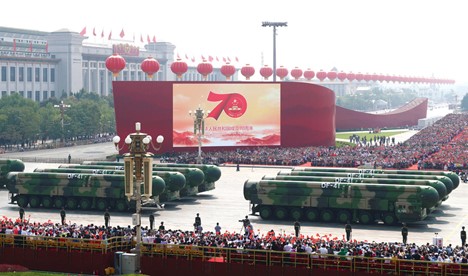 In the history of the People’s Republic of China (PRC), the conditions confronting political leadership have often shaped policy. This is especially so for matters of security. Under Mao Zedong, the PRC made plain its intention to develop a nuclear deterrent in support of its foreign policy, with the aims of redeeming a weak state and countering nuclear coercion. Upon the first successful test of the atom bomb in 1964, China began to lay out the contours of a defensive nuclear strategy, underpinned by a policy of No First Use (NFU) and swearing off nuclear blackmail of non-nuclear states. While China’s attaining nuclear status amid its then-circumstances is notable, the prevailing state of its capabilities was questionable at best, due in part to the leadership’s inflexible skepticism with respect to the applicability of nuclear weapons in war. Over successive generations of leadership, capacity building, and modernization efforts were undertaken, and today sustained efforts are underway to develop and field a credible nuclear triad in support of a minimum deterrence strategy. The Communist Party of China (CPC) with Xi Jinping at its core maintains that its nuclear rise is defensive and in accordance with its current national security situation, but China’s new development period has not been secured, and the dynamics of longstanding security threats are more fluid and menacing. These dilemmas pose considerable headwinds to a Party-state on the move toward fulfilling the Chinese Dream of ‘National Rejuvenation,’ with the centenary of the People’s Republic in 2049 as the self-imposed deadline to achieve socialist modernization. Converging external security pressures in the Xi Jinping era, which appears set to continue beyond the next National Congress in 2022, make a continued commitment to a ‘defensive’ nuclear architecture untenable if the Party is to follow its own recipe for national renewal. Palatable policy options for squaring these contradictions will test the authority of the political establishment and perhaps the durability of the political system. Failing to secure favorable outcomes of future contingencies will tarnish a narrative of inevitable progress toward rejuvenation. Partial failure, however, will not bring the Communist Party to its knees: as conditions facing the leadership become more acute, they will usher in responsive policy, with or without Xi Jinping.