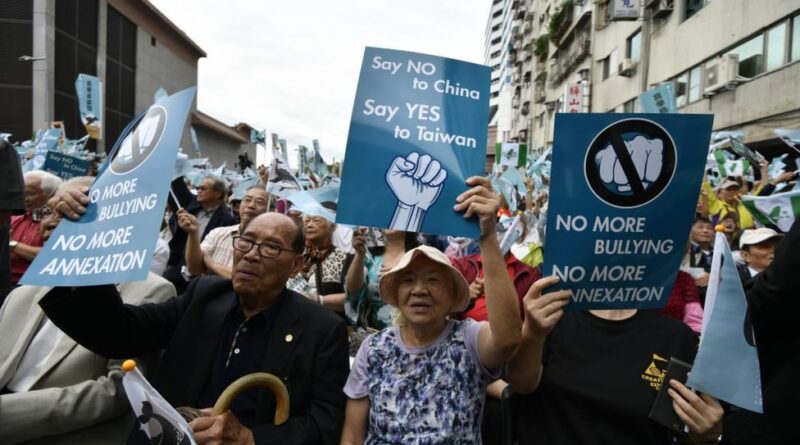 We know that in the past few years, China has become more dominant in the Indo-Pacific region. Beijing has a clear plan to become the economic leader and has territorial claims over the South China Sea, raising concerns among the international community. The Chinese territorial claims go beyond the disputed sea and focus on the reunion with the Republic of China. Beijing refers to history while claiming the reunion and ready to use force if needed, said the Chinese President. Taiwan endorses democratic values but has been under threat since the 1949 split.

Recently the tension between China and Taiwan has leveled up as Chinese warplanes repeatedly entered Taiwanese airspace. At the beginning of the year, Taiwanese officials reported more than 80 military aircraft detected in the air. Rising tension raises many questions and concerns regarding a possible invasion. There might be similarities to Crimea offended by Russia, which could be an example for China. But for sure, the international community will not remain silent on such an action.

Although the TAIPEI Act supports Taiwan diplomatically, however, at the same time, makes China unhappy to obtain its „One China principle.“ China could take the US bill as a provocation and may make her more aggressive. Since China is the major economic partner to the European Union, such an event would put the economy in trouble. Therefore, the EU should issue a joint statement and come up with prepared scenarios in case of escalation. But whether Taiwan turns into the second Crimea time will tell. But similar to Crimea, Russia increased military activity after the administration took office; maybe China has the same intent to test the Biden administration, see its reactions, and set barriers. In the end, China is a significant economic player in the world; an attack on Taiwan would cost its reputation and damage its image.

China has the vision by 2050 of becoming the global leader and economic superpower. Recently Beijing has been implementing controversial laws, committing human rights abuses, and threatening other countries in the region. Taiwan has been under threat from China since the split in 1949. The goal of the Communist party is to unite the mainland and the island claiming part of China. Recently, China has been flexing muscles and increased military actions over the island. The President of China made it public that the government is not afraid to deploy force if necessary to get what they want; in this case, the message is crystal clear, the ultimate goal is to reunify with Taiwan whatever it takes. The international community should pay attention, avoid the invasion and make sure that Taiwan will not turn into the second Crimea. It is essential to see that Chinese aggression has been rising over Taiwan, but how allies and the international community will react and help. Since it is happening nowadays, it is very relevant to discuss and urgent to resolve.

China has a clear vision to become the number one leader in the global order. According to the Chinese President, China set economic and territorial goals to reach by the end of 2049, Xi Jinping. The world’s largest trading nation wants to become the number one economic power leaving all the competitors behind, especially the United States (Lucas 2019). China has been flexing muscles and recently become more aggressive to fulfill its target in terms of its geopolitical goal.

The world has seen how China oppresses its Uighur minorities living in the Xinjiang region. The Chinese government tortures and sends the Muslim minority group into re-education camps (Wang 2020). In June 2020, China issued a new security law for Hong Kong, reducing its autonomy since 1997 and raising serious questions. The existing mini-constitution called Basic Law, which guarantees certain freedom for the city, but has been curtailed by the new regulation (Tsoi 2020). Outside its borders, China has expanded territorial claims for the South China Sea and has started to build artificial islands with a military basis. Neighboring countries do not want to lose access to the energy-rich sea, condemning the Chinese expansion (BBC 2020). Touching on territorial claims, China has another target besides the Sea: Taiwan.

The Chinese and Taiwanese relation has been under review since China wants the democratic country to be part of the mainland since the split in 1949. Therefore offered the same „one country, two systems“ principle as to Hong Kong but has not succeeded. The current president and her predecessor support a free Taiwan from Chinese influence. Taiwanese people took the streets in 2004 to voice their disagreement against the growing Chinese influence in the country, calling it the „Sunflower movement“ (Al Jazeera 2021). Since 2016 tension has been more intense, but the Chinese threat has been there during the last 70 years. President Tsai Ing-wen pushes for a unique Taiwanese identity, but she wants to maintain the status quo in terms of Chinese Taiwanese relations (Hale 2021).

The goal of the Chinese Communist Party led by Xi Jinping is clear, as the President himself said in 2019: „Taiwan must and will be“ part of China, and if necessary with force (BBC 2019). In 2020 the conflict leveled up when Chinese warplanes entered Taiwanese airspace (Walker 2020). Last year in November 41 military aircraft, a month later, 32 aircraft, and in January 2021, more than 80 military aircraft were detected entering the Taiwanese air defense zone (Tertrais 2021). Taipei is concerned over the increased Chinese military action carried out near the island (Reuters 2021). China wanted to send out warnings to the United States and Taiwan with those military exercises claiming them: „routine training exercises… to test training effectiveness…“. Taiwanese Defense Ministry has reported on at least 10 People’s Liberation Army warplanes, including fighter jets, anti-submarine warfare aircraft, early warning aircraft, and an additional fifteen warplanes on the next day. Simultaneously to the Chinese action, the US was carrying out a routine operation on the South China Sea to uphold the freedom of the seas (Lendon 2021).

Is Taiwan the second Crimea?

China has been more aggressive not just on the South China Sea but near the strategically important Donghosha Island, which belongs to Taiwan. Strategically cardinal, because it is close to the mainland, even its airspace belongs to China. It is a crucial geographical entity, although there are no inhabitants on the island. Many people have used it as a transit zone fleeing from Hong Kong to Taiwan after the pro-democracy movement. If China would occupy the island, it could hinder foreign access to the Bashi Chanel, the waterway between Taiwan and the Philippines. It shows some similarities to the Crimea issue (Savino 2021). The case of Crimea could be an example of China of reunification (Paiders 2021).

So the risk of a possible blitz is permanent, but to invade Taiwan, China has to take some challenges into account. First of all, the distance between mainland China and Taiwan is about 180km, meaning that carrying supplies could test Chinese competencies. Secondly, China should count on a possible resistance and counterattack deploying Taiwanese naval forces along the way. Thirdly, China should be aware of unpredictable weather conditions, including rough water conditions and typhoons. However, Taiwan could be the first step to expand Chinese territory in the region following the island chain strategy (Hale 2021).

Even if China manages to occupy Taiwan, it is home to a hostile population towards the mainland; therefore, the PRC would have difficulties maintaining control over the island. Among youth in Taiwan, China is not that popular as the US; the vast majority of the population favors having both economic and political relations to Washington than Beijing (Devlin 2020).

How does the international community react?

Taiwan is solely recognized by fifteen other countries worldwide, it has a shortlist of supporters having her back (Al Jazeera 2021). The most significant ally to Taiwan is the United States. The two countries signed a Relation act back in 1979. Under the Act, the US ensures Taiwan from its help if necessary to maintain „sufficient self-defense capabilities“ (Hale 2021).

Supporting the principal elements of the Taiwan Relation Act, under the Trump administration in 2019, another bill has been passed, the TAIPEI Act. According to the Bill, the United States strengthens ties with Taiwan, aiming for bilateral trade and economic relations. Furthermore, the bill aims for solid diplomatic relations and partnership (U.S. Congress 2020). The Act serves as a response to the aggressive Chinese policy to hinder diplomatic ties with other nations and representation of Taiwan in international organizations. More than likely, China is not happy with the Act challenging its „One China principle“ and interfering in its internal affairs (Kuo 2020).

Following the most recent events, Ned Price said that the US commitment to Taiwan is rock-solid (Lendon 2021). Washington issued a guideline to deepen relations with Taiwan, although China warns the US to interfere in domestic affairs. The more the US supports Taiwan, the more aggression occurs from the Chinese side. The most important to the US is maintaining the status quo, said US Secretary of State Anthony Blinken (The Guardian 2021).

The United States and Japan issued a joint statement to renew the partnership, which is more important than before to reserve peace and stability in the region. Like Biden like Suga, they share concerns over Beijing’s behavior calling Chinese activities inconsistent with international rules referring to the South China Sea dispute and human rights abuses. Furthermore, they encourage a peaceful resolution over the Taiwan Strait (The White House 2021).

It is not the most straightforward task to engage South Asian countries to stand up against China; for instance, even though Malaysia has been affected by the dispute happening at the South China Sea, Malaysia has remained silent and diplomatic towards Beijing. China is the major economic partner in the region and the big brother to all countries who fear backlash in the opposition making the Quadrilateral Security Dialogue, including Australia, India, the US, and Japan’s cooperation fragile. The Quad countries encourage a „free, open, inclusive and healthy region with democratic values; first meeting held in April 2021 when member states discussed the maritime security (Kwek 2021).

France and the United Kingdom – permanent members of the United Nations Security Council and nuclear powers- have rising interest in the region. Paris has defense agreements and bilateral partnerships in the Indo-Pacific, while London has bilateral cooperation with Japan. Other European countries, such as Germany and Norway has own strategy regarding the region. The European Union should issue a joint statement in which member states support maintaining the status quo. Besides that, the EU should prepare crisis-response scenarios if China makes further steps to invade Taiwan (Tertrais 2021).

The European Union, as an essential player, could undertake a vital role in the conflict. In 2016, when tension has risen between Beijing and Taipei, the EU pushed for dialogue. Since then, no action has happened to engage the counterparts. China is the biggest trading partner to the EU; it should be in its interest to hinder a conflict and avoid a possible economic crisis, such as the financial crisis in 2008 (Anstrén 2021). To resume interests, the EU has a plan to counter Chinese authoritarian power by promoting European values and upholding fundamental rights. The plan elaborates on security-related presence, including international security and maritime security, but details have not been published yet (Emmott 2021).