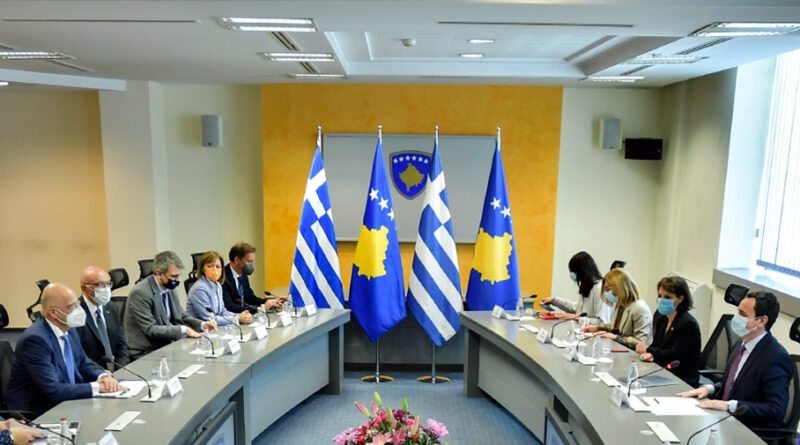 The stance of five EU member states (Spain, Cyprus, Romania, Slovakia, and Greece) that they continue not to recognize Kosovo after the agreement between Kosovo and Serbia seems to be a dead-end for the accord. Greece’s resistance to recognizing Kosovo is closely related to the Cyprus issue and, to a lesser extent, its historical ties with Serbia. The major reasons for Greece’s reluctance to recognize Kosovo’s independence are that it would set a precedent for its problem with split Cyprus and Athens‘ conflict with Ankara over it. (N1 Belgrade 2021) Waiting for Belgrade’s approval for Kosovo’s independence, which has been recognized by over 100 nations, gives Serbia veto power over Kosovo’s EU integration and regional stability. (Gashi 2021)

As mentioned, Greece’s stance over Kosovo is closely related to the Cyprus issue; Turkey’s continued occupation of the northern third of the island resulted from a coup that attempted to unify Greece and Cyprus. (Turp-Balazs 2021) More precisely, when the situation in Cyprus further deteriorated in 1974, Turkey and Greece got involved in the internal affairs of Cyprus. A successful military coup backed by the Regime of the Colonels in Greece was conducted against the Cypriot government. Turkey responded by an invasion. Turkey claims that this action was authorized under the 1960 Treaty of Guarantee. (Roper 2018) With the two parties being unable to reach an agreement, the second Turkish invasion took place in August 1974. (Akgun 2010)Under international law, secession is forbidden if the secessionist entity attempts to split by violating another fundamental rule of international law, such as the prohibition on the use of force. (Sterio 2018) As such, unlike what happened with Kosovo, which enjoys recognition from several states, the Turkish Republic of Northern Cyprus (TRNC), is, to this day, recognized only from Turkey as a consequence of unlawful use of force is incompatible with international law principles. (Akgun 2010)

Nevertheless, Greece continues to see Kosovo’s unilateral proclamation of independence as a negative precedent that can open Pandora’s box for other secessionist claims, including TRNC. Despite its no recognition policy, Greece has undertaken a balancing act towards Kosovo. On the one hand, Greece remains one of the five European states that has not recognized the independence of Kosovo. On the other hand, Athens pursued an active policy of engagement with Kosovo. In terms of bilateral relations, Greece maintains a Liaison Office in Pristina, while it did not prevent Kosovo from entering international organizations. At the same time, Athens gradually adopted policies that facilitated Kosovars’ visits in Greece. (ΕΛΙΑΜΕΠ 2015) Besides, Greece has fully supported the Belgrade-Pristina Dialogue under the auspices of the EU, in accordance with its support of the Εuro-Atlantic integration of the entire Western Balkans region; Greece’s engagement in the integration of the Western Balkans is based on geographical proximity and historical connections. (Bieri and Nechev 2016)

Although the idea of recognizing Kosovo is not being discussed in Athens, an upgrading of Kosovo’s commercial mission in Greece has been agreed upon. In less than a year, Nikos Dendias has visited Pristina twice; the first visit was a few days after the signing of the Washington Agreement between Kosovo and Serbia regarding their economic normalization, while the second one occurred ahead of the resumption of the European-mediated talks on June 4. (Gashi 2021)The Foreign Minister’s visit to Pristina, where he met with Kosovo’s leadership, is part of Athens‘ effort to be more present in the Western Balkans. (Νέδος 2021) Foreign Minister’s visit also signals Athens‘ willingness to expand economic cooperation, especially in the energy sector. (Νέδος 2021) His visit was followed by a meeting between Kosovo’s Prime Minister, Albin Kurti, and his Greek counterpart, Kyriakos Mitsotakis. In the meeting, Prime Minister Kyriakos Mitsotakis reaffirmed Greece’s commitment to further promote cooperation between Greece and Kosovo. (Harris 2021)

Although Greece has promised Belgrade that it would not recognize Kosovo’s independence, Serbian President Aleksandar Vucic stated that improving ties between Athens and Pristina was „definitely not the greatest of news.“ (Euractiv 2021) This statement came as a result of the increased interaction between Athens and Pristina over the last few months. However, Greece’s change of attitude towards Pristina is more symbolic than substantive, a minor upgrade of the Kosovo Office in Athens, short of recognition, and guaranteeing Serbia of its persistence on the no-recognition policy. (Gashi 2021) Even though it is wrong to assume that Greece is one of the “most engaged of all the non-recognisers,” given that Greece is keener on supporting the dialogue between Pristina and Belgrade, it remains undoubtedly that Greece will not easily recognise Kosovo as long as there is no agreement between the two main actors. Therefore, despite the further development of cooperation between Athens and Pristina, Greece’s positions remain unchanged regarding the independence of Kosovo, and it will likely remain like that without a formal deal between Pristina and Belgrade. (B92 2021)

¹ Minority groups per se do not have the power to make this choice under international law, even if they are seen to be substantially different from the majority population in their state due to language, religion, ethnicity, or other factors. On this premise, there is no legal right to external self-determination. This is a result of the widespread belief that in case of a continuous disintegration of nations, typically followed by conflict; anarchy will become the norm, and, as such, the international community is in favor of preserving the status quo of territorial borders. Kosovo’s independence has been challenged on that basis by many states; the dangerous implications for the international order that the Kosovo case presents in relation to other secessionist claims. In this direction, a new state may be created from a portion of the territory of an existing state will be legal if it happens with the agreement of the ‚parent‘ host state.

Akgun, Cansu. (2010) „The Case of TRNC in the context of Recognition of States under International Law,„ Ankara Bar Review, accessed on July 22, 2021, http://www.ankarabarosu.org.tr/siteler/AnkaraBarReview/tekmakale/2010-1/1.pdf .

International Court of Justice. (2010) „Accordance with international law of the unilateral declaration of independence in respect of Kosovo,“ accessed July 25, 2021, https://www.icj-cij.org/en/case/141.

Stan, Harris. (2021) „ Kurti meets Mitsotakis: Greece ought to be part of the international locations which have acknowledged Kosovo,“ Kosovo Now, accessed August 12, 2018, https://kosovonow.com/kurti-meets-mitsotakis-greece-ought-to-be-part-of-the-international-locations-which-have-acknowledged-kosovo/.