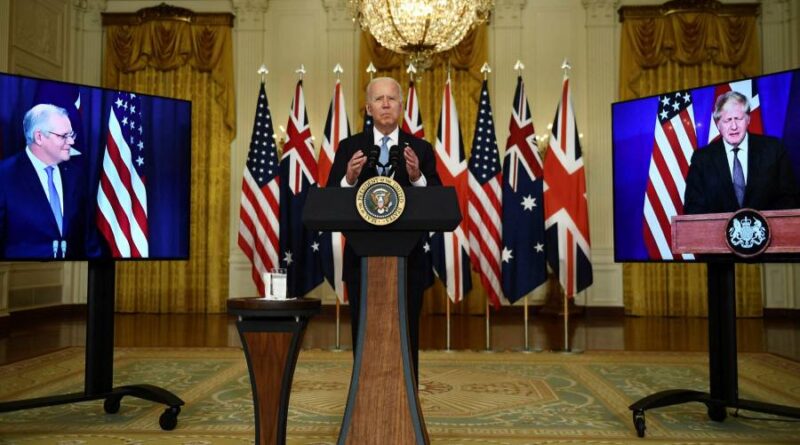 Since its announcement on September 16, the new infamous security partnership between Australia, the United States, and the United Kingdom is creating various geopolitical waves storming on the Indo-Pacific strategic shore. While the spotlight is pointing on the Australia – France relations, all the way to the EU’s recently published Indo – Pacific strategy for cooperation, the U.S. – China strategic tensions were the center of attention among internationalist scholars and media (Mount and Jackson 2021). The AUKUS deal also sparked numerous discussions regarding the nuclear arms race in the world especially in the Asia – Pacific setting due to its involvement with nuclear-powered submarines acquisition and China’s aggressive approach in the region.

On account of its geopolitical security and military capability impact on the Indo-Pacific, if not the world, it is crucial that the AUKUS security partnership is understood thoroughly. Both geopolitical implication and military technological advancement features need to be addressed along with identifying observation points to prospect future direction of the Indo-Pacific and the world.

The AUKUS partnership is an “enhanced trilateral security partnership” between Australia, the U.S., and the UK with the purpose to promote peace and stability in the Indo-Pacific region. A statement was given by the Canberra government saying “the technological edge enjoyed by Australia and our partners is narrowing” while the threats regarding military modernization continue to emerge (Prime Minister of Australia 2021), therefore the establishment of this pact is crucial to both Australia and the Indo-Pacific security.

While the majority of analyses and media are presenting concerns regarding the Australian “Nuclear-powered submarines” for the most part, this AUKUS pact’s agenda covered a much wider area than the submarines. As advancing military technology cooperation, the partnership also focuses on cyber capabilities, artificial intelligence, quantum technologies, and additional undersea capabilities. It is stated that the Australian government will also acquire “additional long–range strike capabilities for the Australia Defense Force” which included; Tomahawk Cruise Missiles, Joint Air-to-Surface Standoff Missiles (Extended Range), Long-Range Anti-Ship Missiles (Extended Range), Precision strike guided missiles as well as accelerating $1 billion for a sovereign guided weapons manufacturing enterprise (Prime Minister of Australia 2021).

Thus, the AUKUS partnership is to be understood as a long-term advanced military technology sharing cooperation, which, besides technology sharing, presumably covering all technical sharing such as skills sharing, personnel training, or support for infrastructure development as Australia does not have its own nuclear program (Allott 2021) and depending on the support from U.S. and UK.

From Australia to China: the AUKUS Partnership Narratives from Different Country

For Australia, the AUKUS deal is the path towards advanced military technology and a chance to secure a partnership with major powers which is considered part of Australia’s long-standing strategic vision. Australia seeks to enhance military capacity through a qualitative approach to ensure its strategic competitiveness in the Indo-Pacific as well as in relation to China’s strategy in the region (Sargeant 2021).  However, while this particular partnership seems to create such a stressful strategic environment for all Indo-Pacific interested parties including Australia itself, it seems like the Canberra government did a certain calculation on strategic risk and decided to move forward with it anyway (Prime Minister of Australia 2021). This strategic calculation indicates Australia’s priority and security perception regarding the Indo-Pacific.

For France, the AUKUS partnership is perceived as a betrayal (The Guardian 2021) since in 2016 Australia had already agreed on acquiring diesel-electric submarines from France before changing its mind by announcing an AUKUS partnership. In Prime Minister Media’s statement, it is mentioned that “France is a key friend and partner to Australia and the Indo-Pacific” (Prime Minister of Australia 2021). Nevertheless, France response to this new partnership by recalling its envoys back from Australia and the United States at the request of President Emmanuel Macron. It is worth noting that the Paris government’s decision to recall ambassadors back from both countries is a highly unusual decision and is believed to be the first time ever (BBC News 2021).

For the United States and the United Kingdom, this partnership is a path toward creating a “free and open” Indo- Pacific (The White House 2021). By helping Australia acquire its own nuclear-powered submarines and all the modern military technology stated in the deal (Prime Minister of Australia 2021), this particular partnership is believed by both states to bring peace and stability to the Indo-Pacific in long run and although none of the official statements mentioned the key Indo-Pacific strategic influencer such as “China”, it is not hard to perceive Washington’s hidden agenda to counter the rise of China in the Indo-Pacific and global strategic security regime (BBC 2021).

And finally, China is clearly not happy about the AUKUS pact and, diplomatically speaking, criticized the pact as “extremely irresponsible” and “seriously undermined regional peace and stability, intensified the arms race and undermined international non-proliferation efforts”  (Embassy of the People’s Republic of China in the United Kingdom of Great Britain and Northern Ireland 2021). Meanwhile, China’s official news expressed relatively more insulting language saying that the U.S. hysterically polarizing its alliance system (Girard 2021). Thus, in summary, China’s official narrative is drawn upon condemning the U.S. as untrustworthy allies and intensifying the arms race and instability in the Indo-Pacific region.

The concerns regarding the intensified arms race are due to the most fundamental elements of the pact; technological transfer and acquisition. With the U.S. exporting one of the most advancing military technology, nuclear–powered submarines, the pact has established new norms regarding arms trade and weapon transfer which is problematic in terms of global weapons (especially weapons of mass destruction) governance. This particular new norm fosters the proliferation of sensitive and militarized nuclear technology as well as sparks more interests regarding military nuclear technology acquisition by non-nuclear weapons states which not only negatively affects global non-proliferation regime but also global strategic stability by enhancing risks regarding both arms race stability and crisis stability (Schelling and Halperin 1988). In conclusion, this particular deal is likely to incentivize other countries such as South Korea and Iran to acquire nuclear-powered submarines possibly from any nuclear-weapon states such as U.S., UK, Russia, or China. (Allott 2021)

It is worth noting that the Canberra government stated clearly that it “has no plans to acquire nuclear weapons” and “all three nations are deeply committed to upholding leadership on global non-proliferation” (Prime Minister of Australia 2021). However, concerns regarding the nuclear arms race are still relevant due to the fact that these submarines could potentially be equipped with nuclear weapons and the nature of reliability of such promise (Global Times 2021).

Strategic Tension: the Indo-Pacific as Security Chess Board

U.S. – China tension became one of the most important strategic factors regarding international, and sometimes domestic affairs. Looking at Indo-Pacific as a ground for superpowers interaction, all AUKUS allies and non-allies (however affected or mentioned states) such as China and France individually possess their own Indo-Pacific strategic policies and interests.

For instance, on the very same day Washington announced the AUKUS pact, the EU also announced its strategy for cooperation in the Indo-Pacific (European Commission 2021) which was overshadowed by the pact announcement. In addition, France is historically the first country to adopt the Indo-Pacific concept with its agenda to promote a stable multipolar order by seeing its position as a power stabilizer and mediator in the Indo-Pacific. It has a plan of action ranging from military balance to supporting law-based governance and multilateralism in the region (Morcos 2021). These actions and strategies taken by European states are suggesting a long and on-growing affection they have for the Indo-Pacific region.

For the U.S., the AUKUS partnership is perceived as new strategic moves toward the Indo-Pacific allies compared to the usual ones such as the Middle East and the European. However, the Indo-Pacific is undoubtedly gaining more recognition as one of the U.S.’s important allies now as the pact indicates that Washington is now beginning to prioritize actions in the region where China is currently having more strategic advantage (Patton, Townshend, and Corben 2021). And for China, one of the most infamous “Belt and Road Initiative (BRI)”, which is considered as China’s grand global strategy, covering the agenda to reshape the global order through infrastructure investment across Eurasia and eastern Africa is enough evidence of China’s intention on the Indo-Pacific region (Akimoto 2021)

With the AUKUS partnership established, the tensions are growing stronger. China now has supporting reasons to implement a more aggressive nationalist strategy if it wants and wherever it wants to. Trust among U.S. allies on the U.S. itself may also be shaken due to the notion of its strategic shifts (Julienne 2021). And the European states are left questioning their actorness and strategy in the region. These potential reactions after the AUKUS partnership establishment are both the consequence of the growing strategic tensions as well as the result of the tensions themselves.

Besides the allies and the main affected non-allies states such as France and China, the AUKUS pact created vast impacts on other countries in the Indo-Pacific region. For instance, the AUKUS pact itself serves as a great example regarding the strategic significance of the middle power as Australia is considered an emerging middle power in the Indo-Pacific region (Joshi 2021), this implies the same strategic significance for other middle powers such as Japan and India. Southeast Asia is also a good example of the region affected by the establishment of the AUKUS pact due to its ongoing security challenges to find the strategic balance between the U.S. and China.

The AUKUS security partnership between Australia, the U.S., and the UK caused a strategic stir among allies and other relevant states in the Indo-Pacific security arena. Different reactions were taken among parties as well as concerns regarding the establishment of the pact. While the deal’s overall purpose is peace and stability on the Indo-Pacific, the AUKUS itself seems to cause a security dilemma itself. The security pact has provoked questions regarding the strategic environment in the region by upsetting other Indo-Pacific security influencers such as China and France as well as other relevant states in the region. The AUKUS deal benefits the allies, Australia is getting the technology transfer and a partnership with superpowers which served directly to its long strategic vision while both U.S. and UK are rooting its strategic plan deeper on the Indo – Pacific arena which China is perceiving as having more advantage. However, from France’s side, the official diplomatic statements and reactions indicate the feeling of betrayal while China is also condemning the pact as intensifying the arms race in the region and pointing out the U.S. as being extremely irresponsible.

The elements of the Impacts on Indo-Pacific security and future geopolitical strategy observation points can be summarized into three extends; the potential intensified nuclear arms race resulting from the military technology transfer from the U.S. and UK to Australia, the enhanced superpower’s tension on the Indo-Pacific arena due to their on-growing strategic preference on the region, and finally, the potential reaction of other Indo-Pacific interested states such as other relevant states such as Japan, India, and Southeast Asia.

Embassy of the People’s Republic of China in the United Kingdom of Great Britain and Northern Ireland (2021). “Chinese Foreign Ministry Spokesperson’s Remarks on the US, UK and Australia Announcing a New Military Partnership.” Accessed 19 October, 2021, http://www.chinese-embassy.org.uk/eng/PressandMedia/Spokepersons/t1907973.htm

European Commission (2021). “Joint Communication to the European Parliament and the Council the EU Strategy for Cooperation in the Indo. Accessed 19 October, 2021, https://ec.europa.eu/commission/presscorner/detail/en/QANDA_21_4709

Morcos, P. (2021). “France: a Bridge between Europe and the Indo-Pacific?.” Accessed 9 October, 2021, https://www.csis.org/analysis/france-bridge-between-europe-and-indo-pacific

Samaan, J.-L. (2021). “AUKUS and the Future of Alliances in the Indopacific.” Accessed 10 October, 2021, https://trendsresearch.org/insight/aukus-and-the-future-of-alliances-in-the-indopacific/

The Guardian (2021). ““Stab in the back”: French Fury as Australia Scraps Submarine Deal.” Accessed 13 October, 2021, https://www.theguardian.com/world/2021/sep/16/stab-in-the-back-french-fury-australia-scraps-submarine-deal