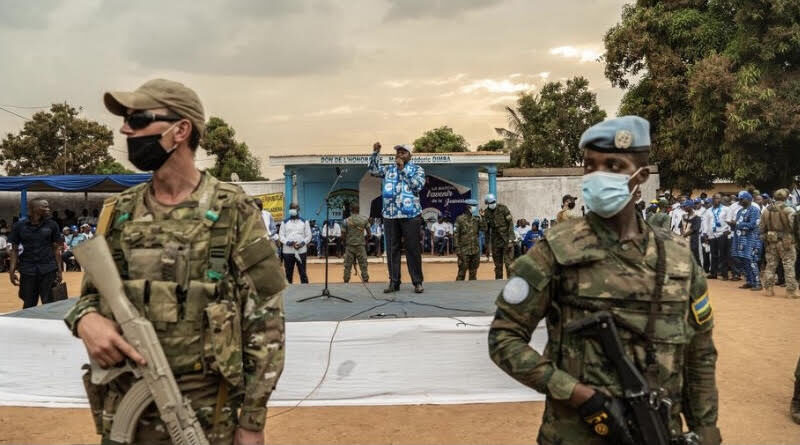 Russia has had its eyes on Sub-Saharan Africa for years now, with a particular interest in the Central African Republic (CAR). This recent Russian influence in CAR has had interesting repercussions not only for the Central African government but also on its perception of foreign involvement more broadly. The Russians seem to have a successful and simple plan to gain influence on African governments, and the case of CAR is a perfect example.

CAR has been going through political unrest since 2013, when the then-president François Bozizé was deposed by the Muslim rebel group Seleka, who took over parts of the country. As a response, a Christian rebel group, the Anti-Balaka, carried out an offense against the Seleka, carrying on violence across the country, In 2014, the United Nations (UN) sent a special mission to CAR, the United Nations Multidimensional Integrated Stabilization Mission In The Central African Republic (MINUSCA), with the goal to put a stop to the violence and build peace. In 2016, the political situation was stable enough to hold elections, and  Faustin-Archange Touadéra was elected president. However, violence never stopped, and serious tensions resumed in December 2020, before the presidential elections, and continued after Touadera’s victory. The violence left many soldiers dead, both in the UN and the rebel groups.

Russia’s first involvement in CAR was in 2017 when the Central African government asked for assistance in dealing with rebel groups spreading violence across the country. Russia received the green light from the UN Security Council to send weapons to CAR, which was the perfect opportunity for Moscow to assert its influence in this mineral-rich country, and expand its international influence. But what makes CAR so appealing to Russia? And why is president Touadera so keen on receiving support from Moscow?

The relationship between the Central African government and the government in Moscow seems to be extensive. Russia provides services in exchange for natural resources and supports on the international stage. This is why we cannot categorize Russia’s interests in CAR only on one aspect, but we have to explain in detail all the factors that are at play. CAR is a mineral-rich country – mainly gold, diamonds, and uranium. As we saw earlier, the government in Bangui has been struggling to deal with rebel groups in the country, and after attempting many peace agreements, there is still no resolution. These two factors have enormous repercussions on the extent of influence Moscow can have on the local government. With the permission of the UN Security Council, Russia was able to enter the country and provide assistance to the Touadera government in exchange for valuable assets.

The CAR’s government interest in welcoming Russia is related to the security and military resources that it can provide to counteract rebel groups and the political support is given to the president. The MINUSCA mission had not been very successful, and the European Union’s (EU) training to Central African soldiers was successful but somewhat useless since the EU was not authorized to provide them with weapons. This shortcoming was exploited by Russia, who saw an opening to be involved, and Russian soldiers – allegedly members of the Private Military Company (PMC) Wagner Group – started training local soldiers and providing the army with weapons. President Trouadera welcomed Valery Zakharov – a former GRU officer – to be his national security advisor, and replaced his security detail with Russian soldiers allegedly part of the Wagner Group. On the international front, Russia asked CAR for support at the UN Security Council, to veto a number of resolutions that would have been against Moscow’s agenda.

Concerns have been rising, however, especially from CAR’s former colonial power France, and other Western countries. Russia has been accused of anti-French propaganda both online and on television. The message that Russia wants to convey is that Moscow is the one that can help the country to bring back peace and that France and other Western powers are just interested in recolonizing CAR. Additionally, Russia has been accused of being involved in disinformation and promoting pro-Touadera messages during the election campaign in the second half of 2020. Other concerns are related to the alleged presence of PMCs, and possible violation of human rights against civilians, including torture and rape. The presence of Russian PMCs on the continent has been one of the main concerns of Western powers in recent years. They are allegedly connected to the government in Moscow and are not only involved in providing training to local troops and supplying them with weapons, but they also gained concessions from governments – in this case in CAR – on mining sites.

The model adopted by Russia to influence African governments, and gain access to natural resources has been quite successful so far. Moscow provides a service – military training, weapons, security services – in exchange for natural resources and support. For unstable countries like CAR, dealing with long-term violence and struggling to maintain peace, this deal looks very appealing. Russia is not the only country providing a tradeoff with African nations. China also provides a service, but it is in the form of economic and infrastructure aid. The support of Western powers and international coalitions often come with restrictions – for example, the training provided by the EU that did not include the delivery of weapons, or the lack of success in the MINUSCA mission – that in many cases do not help the African governments solve their problems.

The Russian system is very straightforward and convenient for African presidents, and above all, provides an immediate outcome. This is clear in CAR, where not only did the Russian soldiers help MINUSCA and the Central African military stop rebel groups from entering Bangui in December 2020, but they also supported the election of President Touadera. Two successes that are difficult to ignore for Bangui. After months of training, the EU left the soldiers without weapons, and after years of attempts to maintain peace, the MINUSCA mission had very little success at containing the violence.

CAR is not the only African country that has welcomed Russia. Mozambique, Madagascar, and Sudan also received support from Moscow, and the list will probably grow in the future. Russia has been looking West in recent months, and after Mali experienced its latest coup in August, the possibility of Russia expanding its interest and resources in the country in the near future seems more possible than ever. It is safe to say that after decades of former colonial powers and Western countries being involved in Africa with not much progress in helping to solve violence and insurgencies, local governments are ready to turn to new countries for help. It seems that the interest is mutual, and – at least in CAR – the Russians are here to stay.

Source of the picture: https://m.dw.com/en/russian-mercenaries-accused-of-rights-violations-in-central-african-republic/a-57201150