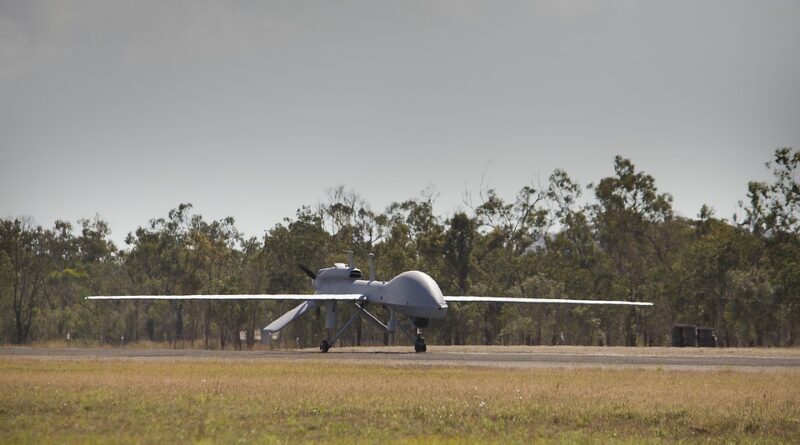 Worldwide, recent military clashes have contributed to consecrate the role of drones for the future of military affairs. Since the dawn of the new millennium, almost every battlefield has been characterized by the involvement of at least one state-actor employing both armed and unarmed versions of Unmanned Aerial Vehicle (UAV). The state-of-the-art performance of the latter differs in kind of duties and techniques, ranging from the simplest recognition task to precise-strike attacks on the ground. In a post-heroic society, where public opinion has drastically reduced its capacity to tolerate human casualties on the battlefield (Luttwak 1995), UAVs play a major role in the evolution of modern warfare dynamics. In light of the expendability of UAVs, their tactical efficiency, along with their natural predisposition, might one day to become fully autonomous. In other words, AI-based vehicles will slowly but surely open a new horizon of military and conflict management models.

The awareness of such a situation persuaded the main actors of the international system to put some effort into the development of indigenous versions of the UAV. Among others, both Turkey and Russia have paid particular attention to the devising of domestically produced drones in the last decade, perhaps due to their lack of technical know-how within this specific sector. Moreover, both countries began to explore years ago the unmanned dimension in an attempt of catching up with other great powers and shrinking their comparative disadvantage worldwide.

Despite the similar conditions which characterized both the Russian and Turkish military-industrial complexes, the different military approach followed by the two countries’ respective Armed Forces has led Moskow and Ankara to pursue different paths. While Russia preferred to work, at least during the first phases, on light and unarmed UAV conceived with the aim of improving the Russian Armed Forces ISR, TA, and EW capabilities (McDermott 2020), Turkish strategical needs compelled Ankara to focus its efforts on weaponized systems. Nowadays, the results of the abovementioned strains are crystal clear: both Turkey and Russia are comprised in the pretty short list of countries capable of producing indigenous models of UAV or UAS.

The first Russian attempt to develop an indigenous drone date back to the post-2008 Georgian war, when the high military spheres realized how the lack of an efficient and versatile instrument for the tactical level recognition heavily influenced the registered losses in terms of soldiers and equipment (Cohen and Hamilton 2011). In order to fill this gap as soon as possible, Moskow signed an agreement with Tel Aviv government concerning the purchase and the production under license of the Israeli Bird-Eye 400, I-View MK150, and Search MKII Drones, in parallel with a training program for Russian pilots carried out by Israeli technicians (de Haas 2011). Thanks to this know-how acquisition process, a few months later the home-designed Orlan-10 started its large-scale production.

The 2014 Ukrainian crisis represented a watershed in the Russian UAV production: if it has shown how much the introduction of the drones improved the Russian fighting capabilities on the battlefield (Freedberg 2015), the sanctions toward Moskow promoted by the majority of the Western countries deprived the Russian military-industrial complex of the fundamental components and knowledge. Severely delaying the development and production of new units, it was Ankara that similarly tried to devise a domestic UAV with the aim of reducing its dependence on Israeli-made machines. As a result of a project that started six years before, the Anka drone was officially put in production in 2010. Yet, Turkey’s military reliance on many foreign components, together with the bad performance it showed during the first tests, convinced the military establishment to look for an alternative solution (Bekdil 2021). In 2011, the Turkish defense procurement office signed a contract with the private firm Kale-Baykar concerning the development and production of a new UAV, formally starting the gestation process which would have led to the birth of the Bayraktar TB-2, which is still considered as the crown jewel of the Turkish drone arsenal.

Moscow, Ankara and the Geopolitical Turmoil

At a time when the two countries worked on their unmanned aerial arsenal, the geopolitical context was subjected to important transformation dynamics which heavily impacted on the international system stability: the seizing of the Crimean peninsula, the outbreak of the Arab Springs and their different outcomes, and the assumption of a more assertive stance by the People Republic of China are just some factors of the general upheaval in which the international order poured. Such a geopolitical turmoil allowed both Russia and Turkey to assume an opportunistic (if not revisionist) attitude in the conduction of their foreign policies, thereby maximizing their gains from the ‘national interest’ point of view (Mead 2014).

In this way, the two countries found themselves dealing with each other in many geographical and political war-torn regions. Either as situational partners or as competitors in support of opposing sides, particularly in relation to a variety of local and regional conflicts outbroken in the ‘broader Mediterranean’, Moscow and Ankara have also directly confronted each other.

Throughout kinetic confrontations, the military dimension has been undoubtedly one of the main fields where Moskow and Ankara have acted in order to efficiently implement their foreign policy strategy. Under the broad umbrella of so-called ‘military dimension’, two are the elements worthy of a deeper analysis concerning the Unmanned Aerial Systems:

The professional employment of their own military capabilities has been the solution adopted by both Turkey and Russia for protecting their specific interests on the international stage. Thanks to the different eruptions of violence on a local level, the Russian as well as the Turkish government have easily legitimized their boots on the ground. In almost every battlefield where the Russian and Turkish forces made an appearance, an important role has been played by the UAVs.

The Syrian civil war has been the first stage that witnessed the deployment of Russian and Turkish drones. The Russian army continued to deploy almost ‘support’ drones in order to improve their overall military efficiency, whereas Ankara used them as a striking platform capable of hitting critical targets, often directed against the same Russian-manufactured equipment.

The first registered important UAVs employment in military action within the Syrian civil war dates back to March 2020, during the fights between the Turkish Armed Forces and a Russian-backed loyalist Syrian militia around the city of Idlib. The Turkish sources affirm that their drones successfully destroyed more than one hundred armored vehicles and dozens of artillery systems, losing no more than six apparatus (Draby and Crino 2020). As for Russia, the first news regarding the use of attack systems are recorded only in 2021, with the release of an official video showing an attack on an ammunition depot carried out by an Orion class drone (Laskin 2021).

The Lybian theater also witnessed the deployment of Unmanned Aerial Systems, and especially the Turkish ones, that have once again offered great proof of their value:  not only did they play a fundamental role in stopping the Khalifa Haftar advance toward Tripoli, but they also succeeded in destroying the Russian short-range anti-air system “Pantsir S-1”, which on a theoretical base should be the main defensive instrument against small flying objects like the drones (Gatopoulos 2020).

At last, the reignition of the conflict in the region of Nagorno-Karabakh between September and November 2020 has been the occasion of a massive deployment of UAVs and Loitering Munitions in a ‘conventional’ context. While the Armenian Armed Forces allegedly could rely almost only Russian-made equipment, including a few Orlan-10 UAV, the Azerbaijani counterpart fielded many different foreign systems, like the Turkish attack drone Bayraktar and different Israeli unarmed drones and loitering munitions (Rumbaugh and Shaikh 2020), such as the HAROP-36. Reliance on the drone fleet has been a game-changer for Azerbaijan, which has dominated the fight since the first day: thanks to correct and wise employment of small systems, the Baku military successfully eliminated the core of the Armenian military capabilities. President Alyiev declared during an interview that the Turkish-manufactured equipment provided to the Azeri forces destroyed 1 billion dollars’ worth of Armenian equipment (Merkezi 2020).

In sum, both the two countries employed their unmanned military capabilities abroad, supporting friendly factions or through direct involvement. But, if analyzing these interventions as a whole the positive impact for both powers easily emerge, focusing on the level of unmanned vehicles the result is much more skewed in favor of Ankara. The qualities of the developed models, together with the doctrine of use of the same, have made Turkey rise as a reference point in the world of unmanned armaments. With strong repercussions on the economic level.

The not-so-open competition in the international market

Other the direct employment on the battlefield, another important dimension of the international relations linked to the UAS is the export one. Since the beginning of the industrial era, the transfer of military material from one country to another has always had a meaning that is anything but limited to simple economic matters. The supply of war material implies in fact the grafting of a linkage (not always equal) between the purchasing country and the supplier country, linkage with an impact that subsists well beyond the conclusion of the deal itself.

The dynamics listed above are particularly strong within the unmanned systems market, due to the limited number of countries capable of building such devices. Both Turkey and Russia fall into this narrow circle, albeit with a very different potential.

To date, Turkey is the fourth largest drone manufacturer in the world, after the USA, Israel, and China (Iddon 2021). The resounding successes achieved by the Bayraktar platforms in the field, together with their relative affordability, have boosted the image of the Turkish machine on a worldwide level. At the moment Ankara is exporting the TB-2 Bayraktar drone to 13 countries, among which are some particularly interesting acquirers.

Ukraine is one of the largest foreign users of Turkish UAV, having not only bought 12 drones (to which another 24 will soon be added) but also have set up a series of joint maintaining and training centers in its territories. Kiev has already employed the first batch of Bayraktar in low-intensity warfare operations against the Russian-backed separatists, with appreciable results. Likewise, Serbia is seriously thinking about becoming a customer of Ankara. The Balkan state, an arguably historical friend of Moscow, has begun in the last few years a process of rapprochement with Turkey, a process which is embodied in a series of cooperation initiatives on the economic level. The possible purchase of Turkish-made drones could weigh on the status of the relations between Moscow and Belgrade.

In this regard, the Russian Federation has entered the international market much later than Turkey. Due to the different timing used to create native models of striking drones for export, it was only in 2021 that Rosoboronexport authorized the sale of the export version of the Orion, the main attack UAV model supplied to the Russian Armed Forces (Bisht 2021). In the summer of the same year, Moscow announced the signing of its first sales contract for a batch of Orion, without specifying who the buyer was. However, although some analysts believe that Orion is the direct competitor of Bayraktar, the gap between the respective amounts of sales (or expressions of interest) is still too large to think that Russia may easily steal from Ankara such a large share of the market.

Shaikh, Shaan (2020, 8 December) “The Air and Missile War in Nagorno-Karabakh: Lessons for the Future of Strike and Defense“. Accessed on 26/10/2021, https://www.csis.org/analysis/air-and-missile-war-nagorno-karabakh-lessons-future-strike-and-defense